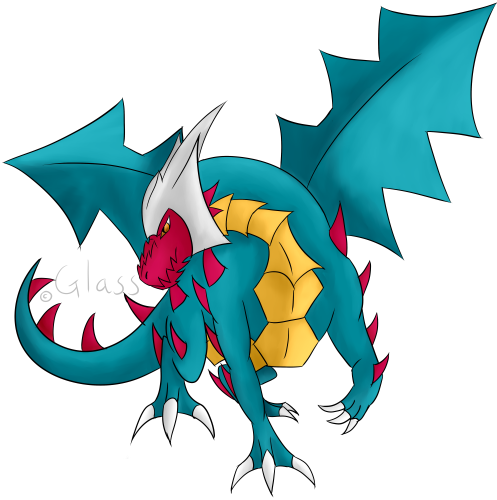 Pokedex Entry
It races through narrow caves, using its sharp claws to catch prey. The skin on its face is harder than a rock. X

Personality
A brave Druddigon who believes that he can save a fair maiden from the clutches of the undead though he makes some choices and thinks of the consequences if he chooses wrong.

Appearance
Wears a silverish gray helm, otherwise a normal Druddigon with a knack for bravery.

Hystory
Dirk was a Druddigon with one thing in mind being the bravest of the dragon types, though often when he was a child he put on a helmet and pretended he was a valiant knight to rescue a princess from the clutches of an evil dragon type named Singe. When not pretending he was training with his trainer who was a guard at the time. Often he slipped out of focusing on his training and daydreamed oftenly got in trouble. Now, he listens and refers to be called Dirk the Daring He still thinks he's a valiant knight, though with the battles he's combined his imagination with his battle style to fight with his opponents and oftenly won battles.

It was back before the outbreak began that Dirk stayed in a castle and wore his trainer's helmet ever since then he's never been seen without wearing one, but it all changed once the outbreak began. He's worn his helmet in battle and rescues pokemon in need since then. He believes there is a Singe that has captured his fair princess, but he imagined singe being undead and he has to put his valiant efforts to the test. His goals are unknown, but he seems to have a vivid imagination and likes to train with any pokemon who is willing to help him get stronger.
After the events that happened in Dragon team, Dirk had been fighting the undead and trying to find the whereabouts of two noiverns. With no avail on it, his attitude has not changed much but his imagination has been showing signs of being less there. Waking up to the reality of what is really going on in the world, Dirk finds himself coming to grip with reality. The Druddigon had thoughts about evolving but it would also mean that his helm would have to be replaced with another. However Dirk’s mission remains to rescue pokemon.

User notes
-Based off of Dragon's Lair character Dirk the Daring
-Is bit of a fantasizing Druddigon, but means well
-Searches for a Princess to defend from the undead horde
-loves his helmet and never takes it off
-Became less imaginative and more in touch with reality

To the PC please for approval
Mewtwo