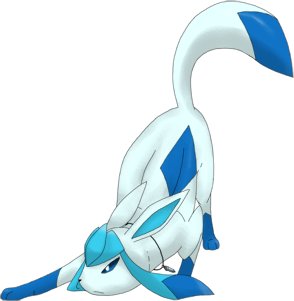 Pokédex Entry
By controlling its body heat, it can freeze the atmosphere around it to make a diamond-dust flurry.

Item
A shard of NeverMeltIce that he wears around his neck.

History
He was born in Hoenn on a nursery farm to the south of Verdanturf Town with a bunch of other baby pokemon. He hatched at the exact same time as a bunch of other eevees, but for some strange reason, his fur colour wasn’t brown, but rather a pale grey. The people who hatched him where amazed, they had taken care of his egg the same way they did with all the others, so they didn’t understand how his colour was different from the rest. They took care of him like the rest of them, not treating him any different just cause he was a different colour, but the people who ran the nursery had been having money troubles, so they had not other choice but to put him up for adoption. Being a shiny they knew there where a lot of people out there that would pay high dollar for him, they had hoped it wouldn’t come to this, but they seemed to have had no other choice. Some rich guy who was into collecting rare and strange pokemon bought him. So the next day he was shipped out to Veilstone City in Sinnoh, he didn’t know what was going on as he slept soundly inside of his poke-ball, but he wished none of it ever happened.

When he got there the man realised him from his poke-ball and put him on display in a glass case in some strange room with a bunch of other pokemon. None of them looked happy, but rather sad, trapped. He was in the centre of the room, like he was his prized possession. The other pokemon where pretty rare as well, but none of them where shiny like he was, and seeing there sad faces started to put him down as well. He was never let out of the case, the food and water was placed on a tray and but through some kind of slot that opened up when it was time to eat. They where fed about twice a day, which was fine since it was somewhat good, but he wanted to go outside. He soon started to ram agonised the glass casing, every chance he got he would keep it up. He even got some of the other pokemon to do the same with there casing, but it seemed to be to thick, and there attacks didn’t seem to work ether. He started to get angry with the humans, at the ones who sold him to live this life after they had treated him like family, the one who kept him in it without even letting him have fresh air, and the ones who did nothing to stop him. He promised himself that he would never trust another human again, so something like this doesn’t get repeated.

One day a fire broke out in the mansion, everything was burning down and everyone seemed to have fled without even trying to save them. Some of the glass cases broke from the heat and the pokemon that where set free didn’t bother to help the ones left behind. Not many of them made it out alive, and he started to think that nether would he. But unlike the rest, one of them came to his rescue. An Arcanine managed to break his glass case from the outside, but since Zero was already week from the heat, he passed out. When he finally came to once again, the Arcanine that had saved him was gone. It seemed to have saved him then left. He hated how he had to be saved, he wasn’t weak just cause he was small, but he was grateful for the help. So he started his own little journey through the unknown region called Sinnoh. He found himself heading north. It got colder the farther north he went that it started to come to the point that he started to shiver from the cold. He soon came upon a frozen rock. It was blocking most of the freezing wind, so he figured he could lie next to it and wait for the storm to die out, but as soon as he touched it he felt odd, but it seemed to be in a good way. His body started to light up and he seemed to be getting bigger. When the light subsided he was no longer cold, but rather refreshed. He looked over his shoulder and noticed that his fur had changed colour, it was now pure white, just like the snow, and his fluffy neck fur was no longer there. He had evolved; somehow the cold rock had triggered his evolution into a Glaceon.

As he continued to travel north he was no longer affected by the cold, since he was now an ice type pokemon. He soon came to Snowpoint City, but he stayed far away from it, he still didn’t like humans, so he wouldn’t go anywhere near places that had them. Soon he found his way down to there port, there was no one around so he figured it was safe to sleep there. Finding himself an empty crate with some packing foam in it he crawled into it and made himself comfortable. The next day one of the sailors nailed the top of the crate on, and Zero woke with a start and tried to claw his way out of the box, but it was no use. He decided to call out, hoping that someone would hear him, but nothing. He could feel the crate move, sway, and he started to feel sick. It felt just like that time he was transported to Sinnoh, only this time he wasn’t in a poke-ball, and he had forgotten how sick he felt on the first trip. Soon the swaying stopped and he was set down onto solid ground. Once the side of the crate was opened up and bolted out of it as fast as he could. The man who opened it jumped back in surprise, dropping the thing he used to open it as he watched as Zero ran for it, out of the city into the new unknown region. He had kept running that he didn’t know how long he had been, his legs started to feel like he was dragging weights and they where starting to cramp up. So when he believed he was at a reasonable distance from the city, and dropped onto the ground gasping for breath. His legs hurt so much. He knew they would hurt again the next day as well, but at lest he was away from that city, and those humans. Without realizing it he passed out from exhaustion.

He woke to a strange feeling in his fur, and complete silence. He stood up, stumbling from the pain surging through his legs. He didn’t like the silence. It was disturbing. Thoughts where going through his mind, what’s going on, why do I feel like I should be running? Something bad is happening, I can feel it. But what is it? He had many questions, but not a single answer to go by. Then footsteps could be heard behind him as something crept up on him, they where creeping closer and closer. He turned his head to face whoever was sneaking up on him, to come face to face with a Weavile. He let out a sigh of relief, he though it was one of the humans from before trying to find him, but his senses where still screaming at him to run, and he soon found out why. This Weavile was different, its claws where covered in blood, and he just noticed that it stunk worse then a Skuntank. He took a defensive stance, and as soon as he moved the Weavile attacked, slashing out with its blood stained claws. Zero noticed that one of its eyes where torn right out of its head, and the left side of his body looked like it lost a fight with a lawn mower. He managed to dodge all of its attacks, but it wasn’t easy, especially with his legs hurting so much from his long run, so when the Weavile stopped attacking for a second he struck it with an Iron Tail. He managed to smash its head, hopefully killing it. It didn’t seem to move, but he still approached it with caution. He sniffed it, it smelt dead, and it looked dead as well. So he took it as being dead. There was something on its left arm, which looked like some kind of stone, but it was really a small shard of NeverMeltIce, so he knew this Weavile had to have belonged to a trainer at some point, but he didn’t care. He took the NMI as his prize for defeating this enemy. His ears twitched at the sudden sounds of screaming. From both human and pokemon. His eyes widened as he heard them coming from all directions. It seemed that his Weavile, was just the first of many undead that he would soon have to face.

User Note
He hates pokemon that think there in charge of him.
Will do things his way regardless of what anyone else thinks, but if the others come up with a good plan he will go along with it.
Hates it when he gets called mam, miss, lady, etc.
Hates it when others think he’s a girl.

(Would like him to be placed in the Viridian Forest in the Kanto region when it becomes available.)

I have added his history, so he can be placed in the inactive till the Viridian Forest can be made.
Ho-Oh