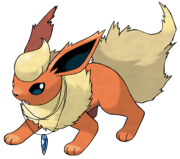 When Ignius was small he remembered being placed into and growing up in a top notch facility. He was young and lived alone is his cage. The young Eevee did not remember his parents, his mother and father only existing to breed high quality babies, most of which suffered a similar fate like him. Alone. People would come by everyday and inspect him to see if he was a viable fighter, and everyday, much to his dismay, he would be left there. He was unwanted. But one day when Ignius had lost count of visitors and all his hope had drained away a young man came and chose him, lovingly picking him up and cherishing him. He felt the man's happiness, the first true joy Ignius had ever felt. He lifted his head and nuzzled into the man as they walked away together. Trainer and Pokemon.

It wasn't long until his strength was put to the test. He swiftly begun training in the tall grass of the wild, facing off against the scattered trainers and Pokemon they cam across. The man gave Ignius a Firestone to increase his strength and he evolved into a Flareon. From that day Ignius's training was intense. Often leaving him battered from the hours of sparring. He grew strong and fast and soon was one of the top competing Pokemon within his area. He and his trainer traveled everywhere striking down opponents one after the other.

However, it wasn't long before new Pokemon rose up to become the best, Ignius had more trouble than before. He would lose battles more than he would win and slowly his reputation died. And with it his owner. He didnt compete anymore but instead sat around in a depressed state. It pained Ignius to see his trainer this way but no matter how hard he tried he couldn't revive his trainer's love or compassion. He grew weaker each day while Ignius just stayed and watched, pain grasping at his heart. But when the infected came, his trainer was in no shape. He was quickly overpowered and killed. Ignius tried to fight them off but fled when his ear was torn in half. The day after, he came back to the scene of the murder. He gave one last loving glance at his trainer, grabbed his necklace for safe keeping and ran, hoping to find a haven where the epidemic had not yet reached.

During the first year of the Epidemic, he was constanly running. Fleeing into towns and taking shelter in the buildings that were still standing. Ignius did not want to confront any of the undead, he did not want to fight them in fear that he himself would become infected. (he would never admit this, of course!) The Flareon barely got by with this tactic, often finding himself in tough situations where he was surrounded by the dead, or sometimes stuck in a dead end alleyway. After weeks, months of using this tactic, the fire-type decided that he had to brave up and fight. Finally creating the courage to face off against the infected, he treated the battles like the old days with his trainers, decimating every foe that he encountered. He traveled across the region of Johto, still longing to find a place where he could rest without worry the something would attack him in his sleep, a place where he could truly mourn for his trainer.

During his search he found the town of Cherrygrove, abandoned but with some houses still intact, he decided to rest there for a while, to build up his strength.

One ear is ragged and torn. Ignius's body is well-toned from his brutal training before the Epidemic. He wears a pendant of an unidentified blue stone around his neck, attached to string.

Ignius is known to be quite stubborn, reluctant to sway in his ways and ideas. He is also sports a childish demeanor at times, and although can he can be playful and dense, behind this he hides a very insightful persona. Contrary to most Pokemon's belief, he does tend to think before he acts and asseses tough situations accordingly.

Only a couple of notes.

All moves must be labeled as how they were learned, even natural ones.

Your history is one giant run-on paragraph. You need a minimum of two to pass so I suggest trying to break it up and adding a little more about his experiences with the Epidemic. It has been a year since it started.

Edited! :3
hopefully it's okay now, I added [Learned] to the moves, broke up the history a little, and added a paragraph to it.
Mewtwo

Very well done but it seems I missed that you do not have a Living ticket for him.

You can request one in the Mart or even ask to switch your Undead into a Living. Just reply as soon as the new Living is on your profile and then I can approve him.

I have the ticket now :3
Mewtwo