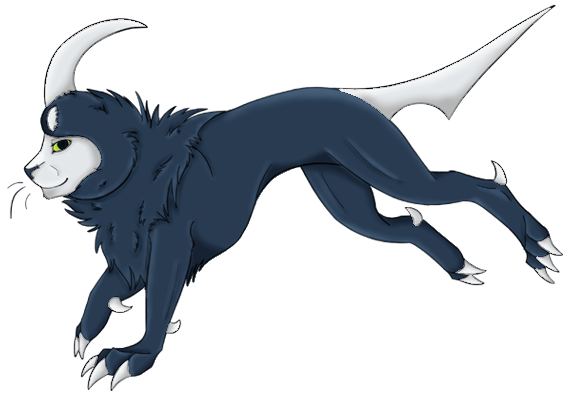 Pokédex Entry-   It sharply senses even subtle changes in the sky and the land to predict natural disasters. It is a long-lived Pokémon that has a life-span of 100 years.
Level-  58
Ability- Pressure (The Pokémon raises the foe's PP usage.)
Nature-   Adamant
Characteristic-   Proud of its power
Moves-
• Play Rough (Bred from Liepard Father)
• Protect (TM)
• Psycho Cut (Level up)
• Sucker Punch (Level up)

History-
Apos was always a bit of a Loner, even by the standards of Absol. He never quite... connected with the other members of his species, segregating himself from them due to his oddly colored form. They, in turn, viewed his inverse coloration as a symbol of his arrogance, and shunned him, creating a self-feeding cycle.  This, in turn, led him to jump at the chance to leave his (pack/group), and join a young trainer, a member of a human militia  who he had stumbled upon in his wanderings through the mountains of Hoenn.

This human, who went by the name of Marco, raised and trained Apos through most of his life, giving him military training, attempting to form him into a weapon. A rough existence, but one that Apos was all to happy to embrace, away from his previous life. Not that he was completely alone, there were other Pokemon in the Squadron who had a similar mindset to him, a lack of connection to those around them, that had led them into choosing a similar path. And thus, the loners became a family, through training and shared battles, hardships and victories.

The family, however, was not to last. Shortly after the initial outbreak of what was to become known only as "The Epidemic", a Starmie, belonging to one of the Forward Scouts of the party, floated listlessly into the Camp, it's gem cracked, and a discoloration spreading throughout it's many limbs. Without as sound, the corrupted Star launched itself into a Rapid Spin attack, ripping through Apos's trainer, slaying him instantly, before turning upon the other humans in the camp with many powerful Psychic attacks.

Recovering from his shock, the remaining Pokemon pounced upon the creature, ending it's unlife in short order. But by then, the damage had been done. Many of the humans in the camp were dead or injured, and the ones who were healthy were rapidly fleeing, leaving the pokemon by themselves. Gathering what meager resources they could, the group of survivors set out on their own, wandering the regions for several months. Apos left the group due to dwindling morale and supplies, more and more frequent attacks. He was killed by the harbinger, Scrafty, while in Blackthorne, and revived by...something. All he remembers is a burst of flame, and the smell of ash and scorched flesh. As the light returned to his eyes, he felt his wounds mending, his body regaining it's strength, it's vigour. He set south after awaking, back to the forest of Ilex, due to circulating rumours of several powerful undead rampaging the area.

Appearance-   Has an inverted color scheme from the rest of his species.
Personality-
• Militaristic in his mannerisms
Can be Anti-Social
• Laid back, but very proud of who he is, and of what he does.
•Is caring to all- even goes to the point of being self sacrificing for others.
•Speaks politely, but to the point, using Sir and Ma'am more than actual names.
•Uses Ms/Mrs/Mr when using names.
•Has high situational awareness due to military training and always likes to have an escape route.
•Has low tolerance for stupidity.
User Notes-   Based on me.
My first non-ghost.
Image by Vincent, shading by Duma

B| I am okay with this
Mewtwo

What is a "Member of a human" in the first paragraph? Is there supposed to be another word after human, like town or group, something? And why is member capitalized? Sorry but that really caught my eye and confused me.

Regardless of answer the rest of the profile is fine.
Approved.

Ah, I appear to have herped. It's supposed to say human militia, fixed, and thank you.
Mewtwo

Ready to be approved
Mesprit

Apos is ready to be approved, as soon as the team is ready. I do request to be last in rotation, if at all possible c:
Victini

Hmm... Things to do, work to be done... Need to spruce this old boy up.
Sponsored content