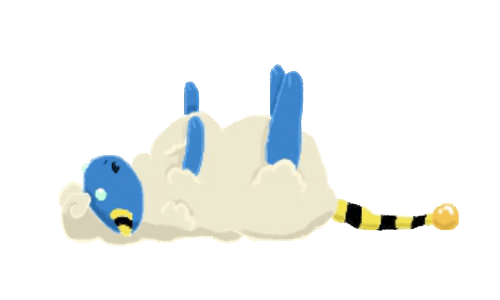 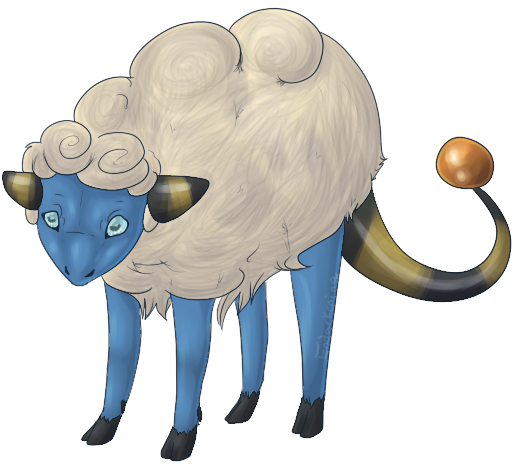 Pokédex Entry
It stores lots of air in its soft fur, allowing it to stay cool in summer and warm in winter.

Onnellinen has always been somewhat of a “lonesome soul”, for lack of better terminology. Never really having had a family, he learned quickly how to survive on his own.

Onnellinen’s earliest memory is opening his eyes for the first time, and seeing a beautiful blue sky. The colors so vibrant, and beautiful, and so clear, he fell in love with colors and the sky. He loved how complex, yet simple, it was. How it wasn’t actually there, but he could see it. He would ponder for hours about the sky, and the ocean, and many other wonders of the world. Other Pokémon he came across thought he was weird, and never wanted to hang out with him. So, alone he stayed, wandering about, pondering and questioning how the universe works.

Several years after birth, he finally came across a friend who had the same views as himself. This friend didn’t have a name, and wasn’t necessarily a friend, nor acquaintance. Onnellinen’s views of who classified as “friend” was different, though. What one Pokémon or person may call “some random person they talked to once for five minutes then never saw again”, Onnellinen called “Friend”.

Him and this friend, a ghost type Pokémon, talked for almost an hour, about how the sky stretched on forever. They questioned whether it had an end. They questioned why it was blue, and how it changed colors. They questioned the laws of physics, and tested how well gravity truly worked. But then his friend had to go, and Onnellinen was once again alone.

He tried making friends with a group of fighting Pokémon- Mienfoo, Machoke, Breloom, and Sawks, mainly- but they didn’t tolerate his constant jabber about the universe, and simply tried to coerce him into fighting. He stayed with this group for three months, leveling up with them. He didn’t quite understand how that worked, and would ponder that for hours, along with his normal questioning. Eventually the group kicked him out.

After the Epidemic started, Onnellinen added another thing to question to his long list. He wondered who it started with, and why it started with them. Estimations, predictions, questions, and hypotheses- he even tried to befriend an infected he came across, simply for the company and opportunity to meet someone who, at the moment, was so famous. He felt glee at the prospect having this new friend to help him better understand the virus going around. The infected, however, did not like Onnellinen, and, even turned away by the infected, Onnellinen happily said “Okay.”, and walked away with a skip in his step, happy to have even met the infected.

Currently, he continues his search for a friend, or friends, who share his views, likes, and dislikes. Some who won’t turn him away, or tell him to “Just. Stop. TALKING!”, which was a term he figured to be a motto to all fighting Pokémon, because that was what they constantly shouted at him. He wondered, after he came to that conclusion, if maybe he should come up with a catchphrase…

Appearance
Onnellinen has the appearance of a normal Mareep, except his eyes are a light green-ish teal color.

Personality
Onnellinen is very friendly, but can be a bit naïve. He didn’t really grow up with an ideal mentor, and models a lot of his actions after things he’s learnt by observing other Pokémon. He is a talkative one, and likes to ask questions a lot.

He finds beauty and wonder in the most simplistic things, very easily pleased by things he sees. His favorite thing to do is staring at the sky, and working out how it works in his head. He is still yet to come to a conclusion on that, but feels he is fairly close. He doesn’t know what a “universe” is, but he often questions it, and tries to ask it why things are, and how could they have been different.

He finds light in all he meets, and doesn’t know that people and Pokémon can, in fact, be bad. This doesn’t deter him from seeking out a friend.

User Note
- His name is pronounced Oh-Nay-Lihn-In(It's Finnish for Happy~ c:)
- His nickname is Onne (Oh-Nay).

Last edited by Rainbow Crayon on Sun Oct 28, 2012 7:15 pm; edited 1 time in total
The author of this message was banned from the forum - See the message
renegade

I approve of this.
Nightfall

Oh my god, Rhonda is going to love him. <3
Effervescent

Yaaaaay~ I'm glad you both like him. :D
Mewtwo