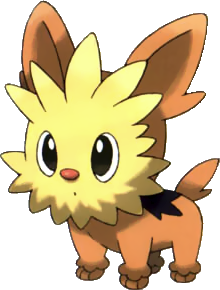 Pokédex Entry
The long hair around its face provides an amazing radar that lets it sense subtle changes in its surroundings.

History
Dollie was hatched into a broken family, with her father always keeping his distance, and her mother hating both Dollie, and Dollie’s sister, Lea. Since Dollie was young, she has heard voices in her head. They were all innocent enough, and never tried to get her to do something out of line, yet her mother still used this against the young Lilipup, blaming her mental illness for her father’s frequent disappearances. Always being surrounded by negative emotions didn’t help Dollie much, either, leaving her always in a depressed state.

Dollie’s only form of comfort only ever came from her older sister. Lea was always there to comfort Dollie when Dollie was in need, or in pain, and their mother only sneered and cursed her name and disabilities. Lea had a specific lullaby she would always sing to Dollie to help ease the young Lilipup’s mind:

When asked by Dollie where she had heard it, Lea claimed she had heard a human singing it once, and found it soothing and peaceful. Dollie had always succumbed to her sister’s soothing voice, and was easily caressed by the flowing words, and lulled into a peaceful state. The aura surrounding them always held happiness in those moments.

Dollie was hatched nearly 16 years before the Epidemic started, and was only, in human years, 17 when word of it reached her family 6 months after the spreading.

She doesn’t remember much leading up to what she's officially dubbed "that night", only a lot of panic, and tears, and anguish. Her sister always acted like nothing was wrong, and would only sing the lullaby whenever Dollie felt something was off. It wasn’t until a few more months passed by that they encountered their first undead.

She was awoken one night by the sound of her mother screaming somewhere off in the distance. Lea tried to stop Dollie from running to go see if her mother was okay, trying to persuade her to run the other way, that mother would catch up with them later, along with father. However, Dollie refused, and, she doesn’t remember how, but she was soon looking upon a horrid sight. Not ten yards from her, a horribly discolored, and rotten Scrafty was… feasting upon her father. Her mother was nearby, staring wide-eyed, in horror, at the sight before her.

Dollie didn’t see much else, before Lea was blocking Dollie’s view, and Dollie was being rushed away from the smell of rotting flesh, and metallic blood. She passed out not long after Lea led her away.

When Dollie awoke, her sister was humming the lullaby, and Dollie was draped over the Herdier’s back. Lea had tears matting the fur on her cheeks, and wasn’t aware that Dollie had awoken. It wasn’t until she set the girl down in a crate that she saw Dollie’s eyes were opened. She leaned down and whispered in the young Lilipup’s ear, “I’m your angel standing by; I always will be,” before kissing Dollie on the forehead. Then, before Dollie could say anything back to her sister, she found herself falling, seeing her sister’s anguished face growing further away as she dropped.

A loud splash sounded, and Dollie stood up in the crate with her front paws balancing her on the front of the wooden box, looking around to see where she was. She found herself surrounded by… water. Above her, on the dock, Lea waved goodbye one last time, before turning and running off.

Dollie cried out for her sister, hoping she’d come back to retrieve her. Unfortunately, she never did, and a week later she was lost; stranded in the middle of no where. Her only surroundings were the water. She feared she’d come across another one of those discolored monsters, and constantly saw them when she slept. She only hoped for someone to rescue her soon- or, maybe, just a quick death.

She floated for weeks before finally reaching a destination. She wasn’t sure where she was, only that there was land. She felt lonely and scared, and wasn’t sure what was going to happen. She only hoped that she found someone- or something- that could help her survive on her own.

Appearance
Dollie has the appearance of a normal Lilipup.[/center]

Personality
Dollie is very timid, and doesn’t come out of her shell often. She is schizophrenic, and often talks to the “voices” she hears. She is very kind, and can love almost anyone after knowing them for a short period of time. She prefers when the mood is light, and easy (not something easily found these days). When she feels comfortable enough, she doesn’t mind speaking her mind. Even though she has had her fair share of pain and sadness, she generally tries to keep herself sane by singing to herself, and not letting upsetting emotions effect her.

Last edited by Rainbow Crayon on Wed Aug 15, 2012 1:47 pm; edited 1 time in total
The author of this message was banned from the forum - See the message
renegade

Psssst Katie! Join Libra, Orre! 8D I am on that team<3
Drago