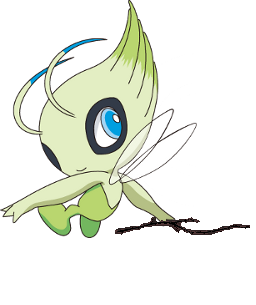 Gender- Genderless
(referred to as a female, for generalities sake)

Pokédex Entry- It has the power to travel across time, but it is said to appear only in peaceful times.

Celebi wandered from time period to time period, and whenever something caught her attention it was always fun to pop in and play around. She met many trainers and Pokemon this way, though none were able to catch her thanks to her Time Travel. As she passed further into the future, a terrible event with seemingly no end halted her. She emerged in her beautiful Ilex Forest only to find it in decay and despair.

The trees were rotting and all around plants died and Celebi felt it all. How could the humans have let it fall into such a state? She tried her hardest to heal the plants, but the damage was so extensive that not even her efforts could slow the decay. She wanted to get out of this time, to find a new future, but unfortunately trying to stop the death of the plants, the weight of the suffering of the Pokemon within, weakened her to the point where she could not use her time travel whatsoever. The pain and suffering of this world was now her own.

As she wandered, looking for a cause, she came upon infected Pokemon. Their seemingly mindless and ruthless behavior gave her all the answers she needed. These creatures, this sickness, it was the cause of all the problems in this world. Celebi sank into a depression that left an icy grip on her heart. She realized that as long as this infection was around she'd be trapped here, and a resolve she had never known emerged. End it. By any means necessary.


User Note-
-Her Time Travel powers are not only linked to her power but also to her heart. Since it is closed off she can no longer travel even if her energy returns

-She still holds true to her title as Guardian of the Forest, and is very protective of any plants or species known to dwell in forest areas

-Believes that once the infection is present the victim is beyond saving, and will insist on death before it spreads

-She is very biased against types that are prone to infection

-The branch she carries is from the Ilex Forest, she took it with her as a reminder to not trust the infected because the infection only brings death and decay
_________________ 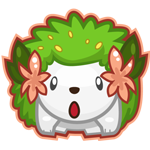 Oh! Celebi! Welcome sister, it's relieving to see that you are well. ^^
Suicune