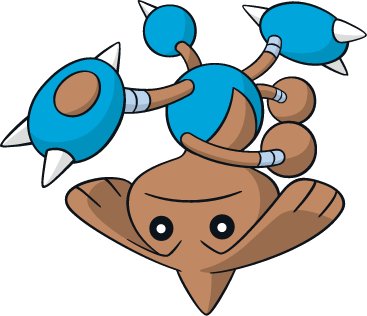 History: In the wild, Matt was the youngest of his brothers. His older brothers were a Hitmonchan and Hitmonlee, both of them were evolved at the time Matt was born. When he was a Tyrogue, he would always get teased by his brothers about how weak he was. Matt dedicated part of his life to becoming stronger so he could prove his brothers wrong. However, everytime he was training, his brothers would randomly attack him. These attacks trained Matt's offense and defense, which helped him evolve into a Hitmontop.

Despite his evolution, Matt was still considered to be weaker than his brothers. He lost all of the fights he had with them, and the fights were starting to put Matt's life in danger. Tired of being treated like this, he ran away from home. One day, he got caught by a trainer named Floyd. Floyd was only interested in battling and wanted a strong fighting type. At first, Matt was thrilled by the idea of fighting. However, he soon realized it was a different type of fighting.

The fights were all underground fighting tournaments, all for prize money. Floyd used TM's to make the Hitmontop stronger for the fights. The TM's proved to be useful, since nobody expected a fighting type to know a flying type move. Matt was soon a powerful competitor in the ring, and his name was known throughout the fighting league.

One thing that Matt was always unable to maintain was romance. When he wasn't in the ring, the Hitmontop was a nice guy. None of the girls liked him for that, they only liked him for the money he had won in the fights. Matt was oblivious to the fact that the girls wanted his money. He had several girlfriends, all of which wanted his money. However, they would mysteriously vanish after every prize fight.

One night, Matt and Floyd arrived at their home to see that someone was stealing their prize money. Matt saw that it was Sasha, a Mienshao he was dating. When he confronted her about it, she pointed out to him that every girl he had been with didn't really like him, and only pretended to like just so they could get to the prize money. The Hitmontop was crushed by those words. He was feeling a mix of sadness, heartbreak, anger, and betrayal. Out of anger, he wents nuts all over the place, attacking every little thing in the house. He rampage ended up killing Sasha. He was stunned at his strength, but doesn't remember any of it.

Matt had never realized how strong he would get whenever he was angry. Since Sasha was also a fighter in the tournament, Matt was banned from it for killing a fighter outside of the ring. Frustrated with everything that had happened to him, Matt left home and went back into the wild to train. The infection hit Sinnoh while he was training, and he considers it to be a phase in his training. But all Matt wants is somebody to love him for who he is.

Appearance: Matt is a normal Hitmontop

Personality: When he's fighting, Matt is very powerful with his attacks. Ironically, however, he is very gentle when not fighting. He is very kind and doesn't speak his mind. He is a bit of a klutz around girls, though. Due to him having his heart broken several times all at once, he is afraid of relationships unless he knows that the feeling are mutual. He is also afraid of doing stupid things in front of girls that he likes.

User Notes:
-Was taught all TM moves to grow stronger.