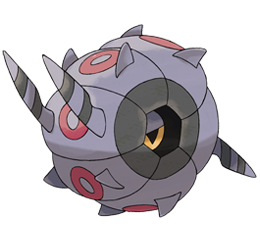 Characteristics:
Likes to thrash about

Pokedex Entry:
Protected by a hard shell, it spins its body like a wheel and crashes furiously into its enemies.

"Shoot first ask questions later!"; that is Gyro's catchphrase. As a Venipede he was extremely curious. Whenever he believed something was either dangerous or threatening, Gyro would attack. Even if they were friendly at the beginning, he will attack.

When he evolved into a Whirlipede, Gyro was a threat. His simple charges could topple a tree. He was a time bomb waiting to go off. But apparently living in the wild did not mean he wasn't heard of. Almost every day trainers came to try and capture him. Gyro made sure that their Pokemon had no chance of attacking back. Trainer after trainer, Gyro beat all of them. This made his parents proud, but they were still worried about him. What if his power got out of control.

One day, a strange man came up to challenge Gyro. Gyro was prepared, but not for what the man had in mind. Using a charged net and a strange cage, Gyro was caught. He took one last glimpse of his parents before he collapsed from the pain. Once he woke, he took no hesitance into an attempt to break out. Gyro had no idea where he was no what he was on, but he knew anywhere would be better. With luck, Gyro's cage fell from the back of the truck and he tumbled down a hill. With Gyro unconscious, no one knows where he is.

-Prefers to do Sludge Bomb at close range


Also, "Gyro's nature made sure that their Pokemon had no chance of attacking back." What does that mean? Rash ups special attack, but lowers special defense. It doesn't make the Pokemon invincible. Please revise.

Sorry, my mind was kinda off that day. I corrected both of them.
Mewtwo

You will be in Canalave Team.