Lapis Lazuli the Half Blind Lairon (killed by harbinger)

Lapis Lazuli the Half Blind Lairon (killed by harbinger) 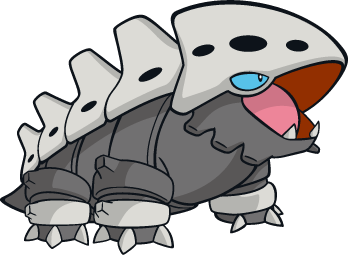 History-
Eyes the color of Lapis.

Alexandra was born to a small litter of three. Both of her parents being Aggron's she didn't gain any super powerful move. Alexandra grew up not knowing about her brothers. The little Aron was the youngest of the three and she had the strangest thing on her ankle. On closer inspection by her parents, they found it to be a Lapis Lazuli. The Aggron parents were cautious at first because of a legend within their species, but they waited for the little Aron to open her eyes. The baby opened her eyes and the parents gasped.

A future as black as night.

Alexandra was a happy little Aron as she played with the other wild pokemon. Apart from falling asleep every now and then, she was a very hyper child. The other pokemon of her species feared her and keep they're children hidden from her. So she mostly played with the native pokemon. She still did not understand what the others were so afraid of. She tried to ask her parents, but they only said this, "Your eyes. Your eyes are what everyone's afraid of."

As she got older, Alexandra started to understand more and more what her parents meant by that, but she never got to ask her parents more about the subject because she was soon captured by a trainer. She would soon find out that his name was Dallas.

A small light at the end of the tunnel.

Dallas was good to her and treated her like his other pokemon. Through at the time, she was his second pokemon, along with a male Torchic named Ruby. It took some time, but eventually Alexandra started to warmed up to Dallas and Ruby. The three were a strong team and soon the team got bigger, with the additions of Sapphire the female Poliwag, Emerald the male Shroomish and Diamond the female Taillow. Alexandra was happy with this group and enjoyed their company.

As Alexandra and the team took on the gyms, Ruby, Sapphire, Diamond and Emerald all evolved, but she was still a Aron. Dallas said it alright and that Aron's took alittle longer to evolve then other pokemon. She was alittle upset at that fact but she soon grew out of it when Dallas taught her some TM moves and even took her to the Move Tutor and had her learn Superpower.

Why must the light vanish?

At one point, after Ruby and Sapphire evolved into Blaziken and Politoad, the group took on Winona. At the time, Alexandra was still a Aron and was starting to get frustrated with everyone else evolving and not her, but when Dallas had her battle Winona's Swablu and Altaria, she was able to do massive damage to Altaria and knock out Swablu, but fell to Altaria's Dragonbreath.

Once the battle was over, Alexandra was really upset about being defeat when everyone else did so great against Winona's pokemon. Dallas saw this and traveled back to his home town of Dewford. As the group traveled to Dewford by boat, it was that time the undead started to appear and Alexandra, Dallas and he other were completely unaware as to what they were about to come home too.

The curse is revealed.

When they got of the ship, Dallas started to cry. Everyone came out of their poke balls and tried to comfort they're trainer, except for Alexandra. Yes, she cared for Dallas deeply, but something wasn't right. The Aron walked toward two bodies she swore she knew and as she got closer she gasped. It was her parents! She ran other to her parents and nudged her mothers body. The Aggron groaned as she opened her ice blue eyes on her daughter. "A-Alexandra, i-is that you?"

The Aron nodded her head as her Lapis colored eyes watched her mother with worry. "P-please my child, I must t-tell you the t-truth about your e-eyes. The eyes of death." Alexandra looked at her mother with scared eyes. "It's a-an old tell a-among our sp-species. The child b-born with the L-lapis Lazuli colored ey-eyes will bring death an-and destruction to th-the world." By this time the Aron was backing away slowly from her mother as she continued.

"B-but when you we-were born, your f-father and I ag-agreed to keep you an-and that's what we did. Pl-please Alexandra, your father and I-I loved you very much." The mother Aggron took a shaky breath and her body went limp. Alexandra ran over the body of her mother and nudged it as she tried to "wake" her mother. The Aron tried so hard to wake her mother and father up, but Dallas had to rip her away from the remains. She cried in her trainers arms as the group turned their backs and started back toward the ship, but Emerald was knocked to the ground.

I lost far more then just an eye that day.

The group turned and gasped at the Aggron's in front of them. Alexandra was so happy she jumped from Dallas' arms and ran to her parents, whom she thought were still alive. As she ran up to the two Aggron's, she noticed the red eyes and purple markings on her parents and her run turned into a nervous walk. She smiled happily at her parents as Dallas yelled, "Alexandra, run! Those aren't your parents!" The Aron looked at Dallas and saw Emerald on the ground. Her eyes widen as she turned to the two Aggron's with fear.

The Aggron's loomed over the small Aron. Alexandra gulped as her father looked at her with hunger. He lifted his claws and slashed down at the Aron with Metal Claw. Alexandra screamed in pain as her left eye was gorged out of it's socket. The Aggron's huffed and turned on her friends. Alexandra was powerless to do anything to help her friends as the Aggron's attack them. Emerald who was already on the ground was sliced into by the female Aggron. He screamed in pain, as Diamond tried to help him. Ruby and Sapphire were trying to fight off the male Aggron, but he knocked them aside and his red eyes focused on Dallas.

He raised his claws as Alexandra screamed to stop, but he didn't listen and his slashed down with Metal Claw. Blood shot everywhere as the Aron's single eye widen and she scream as she shot forward, her body enveloped in a white light. Alexandra charged forward with new found power and attacked her parents. Both Aggron's battled their daughter as if they didn't know her, but Alexandra didn't care anymore. They had attacked her friends and no one, not even her parents, were going to get away with hurting her friends. She charged forward and roared.

When the battle was over, the newly evolved Lairon stood over her torn parents bodies. She had killed them, but they attacked her friends. Her friends. She ran over to Diamond and Emerald. Both were on the ground and Emerald had a gash in his stomach. She knew that Diamond and Emerald were more then friends and it broke her heart to see them like this. She turned her head and ran toward Ruby, Sapphire and Dallas. Both Ruby and Sapphire were standing over Dallas. Alexandra looked the boy over and her eye started to water.

Why am I so weak?

Dallas had three long slash marks going down his torso and Alexandra nudged his body. He didn't move and the Lairon started to cry. Ruby and Sapphire tried to comfort they're steel type friend, but Alexandra rejected them. She told them, that she had no reason to be here and that she wanted to leave. Ruby understood and said he could take her somewhere else. So that's what he did.

Thanks to the ship and what few humans remained, Ruby, Sapphire and Alexandra took their friends got on the ship and left Hoenn. It didn't take them long to get to Unova. Alexandra was the first to get off the ship, but she didn't look back. She ran and ran, never looking back, but holding her friends close to her heart. She had taken Dallas' Black Scarf as a keepsake and now wore it over her left eye or what was now just an empty socket and she also changed her name.

I'm not the same as I once was, but i'll always remember my friends. They will live on in me, Lapis Lazuli.

Appearance-
A normal Lairon with a black scarf covering the left side of her face and eyes the color of a Lapis Lazuli. Her right front ankle, for some strange reason, has a Lapis Lazuli imbedded within the ankle it's self.
Personality-
She's a very quiet Lairon and isn't one to fight unless provoked. Sense she's lost her left eye she tends to be more of a protector then a fighter. The loss of her eye has cost her much more then just the eye itself. She can be very hot headed and stubborn when she believes in something very strongly.

-She often goes by the Alias of Lapis or Lazuli

-Her real name is Alexandra, but she changed it to Lapis Lazuli

-Dallas had a thing with naming his pokemon after gemstones

-Believes she caused the Epidemic, but in truth she didn't
Guest

Lapis is ready for approval!
Mewtwo