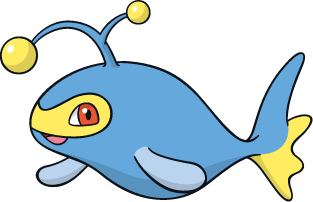 History: Hannah never knew who her parents were (they were two Lanturns). They had died of an illness prior to her birth. She was smaller than the other Chinchou, and she was usually the weakest of whatever group she was in. She was teased because of being so weak, but she had no one to help her grow stronger. She had no friends.

One day, she was swimming near Castelia Harbor when she saw a boy wading in the water. He seemed a bit sad, so Hannah swam up to him and tried to cheer him up. The boy, Wade, loved the Chinchou's bubbly personality, and she made him happy again. He would come back to the same place they met to play.

Wade and Hannah were oblivious to the infection until it was too late. They saw a weird looking Swampert coming towards them. It had red eyes, and it smelled terrible. The ugly truth was, Wade wanted to die and he knew about the infection. He didn't tell Hannah because he had a feeling she would try to protect him and she would end up dead. He and Hannah shared one thing in common; they were both teased. Hannah because she was weak, and Wade because he was gay. He was just tired of it all and wanted to die. When he and Hannah first met, he was going to wade in the water and then jump off the bridge, but the little Chinchou was what kept his spirits up.

As the Swampert was moving in closer, Wade told her to swim away for her own safety. She didn't know why, but she did for a little bit. When she looked back, she watched in horror as Wade was torn apart and devoured by the Swampert. The sight scared the Chinchou so much that she believed anyone can and will kill her. She swam away from the undead.

She now lives in fear of death and hopes to survive the epidemic, by hiding from it.

Appearance: A normal Chinchou, though she is slightly smaller than normal.

Personality: To a stranger, Hannah is scared of everyone and believes that everyone is infected. However, if someone was to show that they weren't harmful, she is a bubbly little Chinchou who will stay very close to people she trusts.

User Notes:
-Leveled up in the RP