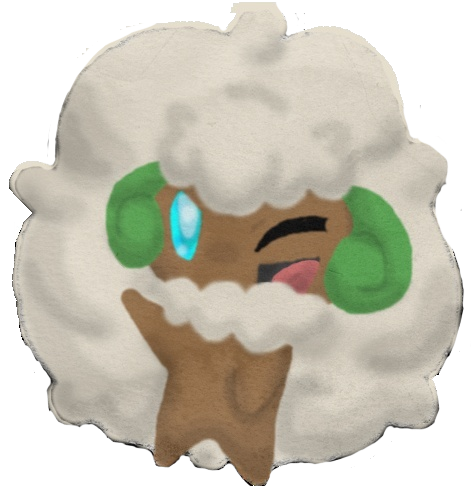 Name-
Midsummers Night Dream. (Dream)
Gender-
Male
Level-
28
Moves-
-Grass whistle (breed)
-Dreameater (TM)
-Gigadrain (previous evolution
-Tailwind
Ability-
Prankster
Nature-
Naughty
Characteristics-
Mischievious
National Dex No./Species-
547/Whimsicott/Windveiled pokemon
Height- 2 feet
Weight- 14 lbs
Pokédex Entry-Like the wind, it can slip through any gap, no matter how small. It leaves balls of white fluff behind.
Item-
None.
History
Before the epidemic hit an experienced trainer had decided to try their hand at breeding. She first wanted to try to breed to pokemon to get a special move on a pokemon who wouldn't learn it any other way. So she bred her whimsicott with a roselia that knew grass whistle. She was excited to receive an egg and couldn't wait to see if it would have the move she had tried for. She started to try and hatch it right away.

After a while the egg was getting close to hatching. But she wanted to train her other pokemon so she could try the pokemon league challenge, so the egg had to wait. Just before she would go to the pokemon league her family had asked her to come to a festival for Midsummers Night. As she traveled to meet her family at the town holding the festival she decided to bring the egg with. It was Midsummer's eve when she got to the last route between her and the town, and night by the time she was just outside town. But then the egg hatched and a cottonee with electric blue eyes popped out. In honor of the night he hatched the trainer named him Midsummers Night Dream, or Dream for short. The mischievous pokemon used grass whistle and put its trainer to sleep. When the trainer awoke it had eaten all her food. She chastised dream, but found it hard to stay mad at this cute little prankster.
She later trained her little cottonee, while trying to stop it from pranking people. They had soon bonded and loved each other, because of this Dream would pull less pranks and even would never trick his trainer. She soon taught it dreameater because of its knowledge of grasswhistle. Eventually Dream had grown quite strong and was rewarded with a sun stone, causing him to evolve. With this he had bonded even more with her, but became more mischievous.
But alas, soon the Epidemic hit and the trainer was forced to evacuate, and leave most her pokemon behind. I much to his dismay, Dream was one of the unfortunate ones. Confused and lost he has traveled and learned how to survive alone and in this nightmare of a world. He often hides in small places most pokemon can't get to and when able, uses the wind to aid him in a hasty retreat.
Personality
Much of prankster he tends to trick those who try to help him. He deceives and lies to get what he wants. After his trainer abandoned him he became much crueler with his tricks and has a hard time trusting people. Doesn't prank those he cares about.
User Note
-Electric blue eyes
_Often uses grass flute to play cheerful marry tunes.
-His father was a Roselia
-His trainer left him because she didn't want him pulling pranks on the many traumatized people.
-"Star" shape stem thing (if you know what it might be called please inform me) on the back of his head is also electric blue.

You have no ability stated

Your picture needs a transparent background

There are a lot of... odd sentences in there, making your history almost incoherent. Please revise.

Here I made the image transparent for you.
Guest

I believe it's ready for approval.
Mewtwo

Approved. I will go with Lugia's earlier note that you will be placed in Relic Team, Orre.