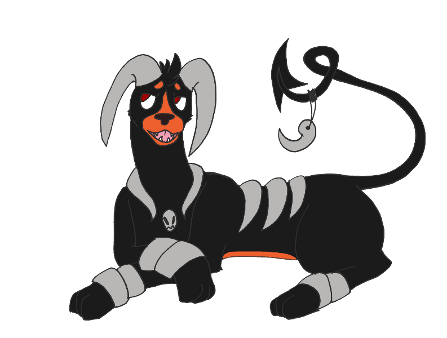 Pokédex Entry:
The flames it breathes when angry contain toxins. If they cause a burn, it will hurt forever.

History:
Jared's early life was filled with misfortune, starting when his mother died from drowning after being attacked by a hostile Gyarados near Slateport. For a while things went fine, except for the gaping hole in the family left by her demise, but then another tragedy struck when Jared's father, Jay, was killed in a landslide. Still a young Houndoom, Jared was forced to look after his unstable younger sister, a little Poochyena named Mina. Jared struggled to find food and keep them alive, searching through dumpsters in the human cities and even attempting to steal from stronger Pokemon who would always chase Jared and Mina away. Food was always scarce, but when a terrible drought struck the Hoenn region, it became practically non-existent. Every substance Jared found was given to Mina; he refused to let his sister starve. But as his energy was sapped and his entire body became hollow, as if his soul was gone, Jared could no longer look after his younger sister. On the brink of death from starvation, the two siblings were found by a trainer named Ace. Driving off the predators looking for a meal, Ace took the two wolf Pokemon back to his home in Slateport. It took a long time for the two to be nursed back to health, but soon the drought was over and the land of Hoenn was filled with new life. Jared was burning with energy at how green the land was when the rains came, but his sister wasn't feeling as good as her older brother. It steadily grew worse, and soon Mina couldn't even walk anymore, and Ace took care of her inside. Jared was heartbroken; if his sister didn't recover, she would never be able to enjoy life.

Mina never fully recovered, even after two years with Ace, but Jared had grown much since that fateful day when the man had took them from death's door. He had long ago evolved into a Houndoom, and though she wasn't completely healthy, Mina was holding up a lot better than before. Jared decided that they should head their own way and not hold up Ace anymore, who was an accomplished Trainer. As Jared, with Mina, began to leave, Ace come up to the Houndoom, holding something in his left hand. It was a razor fang, the trainer's last gift to Jared.
"Take this," he had said, "Let your courage be known to all of Hoenn."
And with this, Jared set off with his little sister, unaware of what he was risking. After two days on their own, the siblings were attacked by three dog-like Pokemon: an Arcanine, a Ninetales, and a Granbull. Jared fought back, his flames scorching his enemies with pain that would last an eternity. But even though the Houndoom battled with all he had, soon his sister Mina lay dead upon the floor, killed by the Granbull. The three fled, leaving the pain and anguish of losing his last family member crashing down on Jared. The Houndoom desired revenge, and after healing his injuries, he set off to find the three brothers that had killed his sweet sister.

He found the first, the Arcanine, near the Fiery Path. The two, enemies, immediately leaped into a fierce battle. Jared's fire attacks worked on the flame-dog, who's claws and teeth tore into Jared's thick, black fur. The two slashed at each other, used their flames, even other attacks. Then, somehow, Jared found the weak point of the Arcanine, and killed him off in one brutal attack. The Razor Fang, which increased chances of critical hits, had helped him, and Jared claimed the first brother for his own.

Jared came face to face with the second brother, the Ninetales, but their Fire-attacks were useless against each other, and Jared used Thunder Fang and bit down hard on the fox whenever the chance came. This one was stronger, much stronger than the Arcanine, but not as smart. As the Ninetales used a powerful Dark Pulse on Jared, he feinted and pretended to be hit, and dead. Apparently the Ninetales was extremely arrogant, and while the fox was gloating, Jared leaped up and sunk his teeth deep into the back of his neck. And so Jared claimed the second brother for his own.

But the third brother was powerful, and very clever. Jared was tired and injured from the recent battles, and the Granbull was furious over the other brother's deaths. As they fought, Jared instantly knew he was outmatched, but refused to give in. However, as the battle progressed, Jared became exhausted and the Granbull got the upper hand. As the Granbull went for the killing blow, a beam of ice struck its torso and froze it. Jared, bewildered, turned in the direction where the attack had come from....and saw Ace with his Weavile, Krystal. The Granbull managed to destroy the ice, but together Krystal and Jared overpowered him. But in a last, desperate struggle, the Granbull used Hyper Beam, which hit Ace, and slashed the Weavile's throat. Jared flew forward at the Granbull, seemingly in an unconscious way, as if his mind had fogged up. His claws plunged into the Granbull's throat, and finally, Jared claimed the third brother as his own. The revenge had been fulfilled.

The victory was not without a price. Ace and Krystal both were dead, and though Jared could feel stabbing grief and regret, he wasted no time. The Houndoom began to dig fast into the grass-covered ground where he had taken them, and even though his claws bled and bled, the scarlet liquid seemed to thank Ace. It was a gift to the man who had saved Jared's life twice. After burying Ace with his beloved Weavile, Jared left for Slateport, where he had once lived with Ace....but collapsed near Verdanturf, and never actually made it to Slateport. For awhile, Jared stayed in the town...until the Infected started to come. Worse than anyone else he had fought, Jared still felt that his pain and terror was the debt he was paying to Mina, Ace, and Krystal.....and the debt would only be fulfilled when he joined them.

-Jared is very protective of those younger than him; it is something that comes from his early life with his little sister. Therefore, it's only natural he'd be protective.

-Jared doesn't mind pain, since the 'debt' he must fulfill still weighs heavily in his mind.

-Jared kept the Razor Fang Ace gave him, the last gift given to the Houndoom.

Oh sorry fixed! :> I adopted him and forgot :P
Lugia

Unfortunately, you are too new of a member to begin a team.