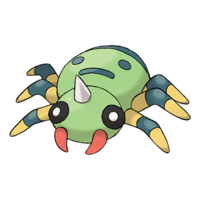 Name: Servous
Gender: Male
Age: Child
Level: 10
Moves:
Poison Sting[Level]
String Shot[Level]
Signal Beam[Breeding]
Electro Web[Breeding]
Ability: Swarm
Nature: Jolly
Characteristic: Somewhat vain
National Dex No./Species: #167, Spinarak, String spit pokemon.
Height: 1'08"
Weight: 18.7lbs
Pokedex Entry: It sets a trap by spinning a web with thin but strong silk. It waits motionlessly for prey to arrive.
Item: N/A
History:
Servous was born from an Ariados and Galvantula. He was very prideful of his webbing skill. From his earliest ages he crafted many electrifying webs, rivaling even his father's. Obviously, he did this for food in the beginning but eventually he began to do it for sport, catching much food for sport, eating it rarely.

He became so confident he was making webs everywhere. Making a web only took a few seconds. But one day he went in to make a web in a shipping box, already being sent. He was confident he'd make his web and be gone before any problems arised, but he was wrong.

In the middle of making his web it closed on him, and he was trapped, going wherever this box was going. Eventually he felt big shaking, seemed like a storm. His box flew and landed in the water, he was likely on a boat.

Last edited by Avalanche on Tue Aug 21, 2012 6:49 pm; edited 4 times in total
The author of this message was banned from the forum - See the message
renegade

Why is this in the Living profiles if no one has approved it...?
Lugia

what the heck? the picture dissapeared again!?
Lugia

As this is a reactivation he needs to have the new fields added to fit our new format. Age, Appearance, and Personality are all missing.
_________________

Editted, I believe it's ready.
Mewtwo

You did add the age field but it is still blank. Please put in an age.