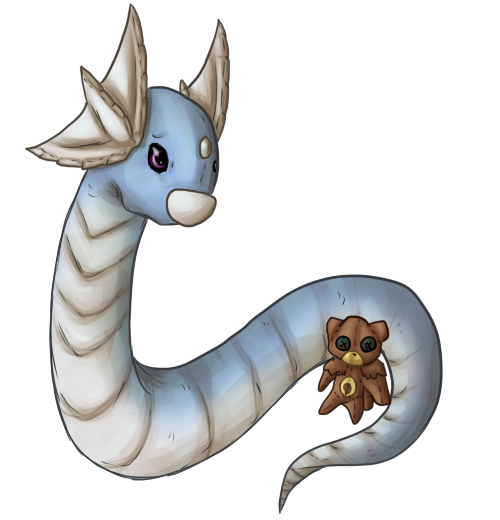 Name-
Nausicaa
Gender-
Female
Level-
4
Moves-
-Wrap
-Ice Beam
-Dragon Dance(Breed)
-Extremespeed(Breed)
Ability-
Shed Skin
Nature-
Gentle
Characteristics-
Often Lost In Thought
National Dex No./Species-
#147 Dratini/The Dragon Pokemon
Height-
5'11"
Weight-
7.3lbs
Pokédex Entry-
It is called the "Mirage Pokémon" because so few have seen it. Its shed skin has been found.
Item-
A stuffed Ursaring doll
History-
Dratini was born after the epidemic hit NewUnova and so, she knew nothing of this world nor what horror's it held. The day she hatched was a dark and gloomy day and her parents no were to where to be seen. So the little dragon type wiggled out of her egg and found a Ursaring doll next to her egg. She wrapped her tail round the doll and slithered toward the smell of death. When she rounded the corner she found her parents.

Two Dragonite's lay hand in hand as the drifting sun lay it's rays of light through the tree's and onto the bodies of the little dragon types parents. Then out of the forest, a large Krookodile charged at her with a Brick Break. Her eyes widen, but then out of the nearby river a Krabby came out and used Metal Claw on the Ground types head. The Krabby put it's pincers in a X in front of his body and glared at the Krookodile.

The Dratini was scared or these two pokemon, but had no idea what or who they were, but she keep quiet and watched the two pokemon battle. It seemed that the Krabby was trying not to get bit or slashed, but the Krookodile didn't seem like it care if it took alot of damage or not. The red eyes and purple skin of the ground type, proved it was infected, but Dratini had no idea. So when the Krookodile tried to use Crunch on her, she used Extremespeed and smacked the ground types face of a tree trunk. The Krookodile turned, but was stopped when the Krabby used Stomp and crushed it's head.

Dratini flinched at the blood, but when she looked up the Krabby was gone. She looked around, but he was no where to be seen. She was a little scared but continued to slither until she made it to Chargestone Cave. She looked around and found it to be deserted. So she stayed in the cave. Waiting and watching for any living to call family.
User Note-

-Has a fear of the dark

-Tends to hum "Over You"

-WILL be able to speak Irish when she gets older

-This is her theme song https://www.youtube.com/v/3Y2icHOgC5U

Rhyder is in the Orphanage and Rain and Nidor are inactive.
Mewtwo

As moves are passed from the father to the child, she could not learn either of her egg moves. Since she is a Dratini, her mother would have had to have been the Dragonite.

Eggs hatch as the mother Pokemon's species but can learn the father's moves, if compatible. Neither of her egg moves can be learned from Hydreigons.

Also, I'm not sure about her knowing how to speak as she has never heard anyone speak to her before, hatching among the dead. Where would she have learned? Much less learned Irish? Being just a hatchling would make both of those near impossible.

She'll learn Irish as she gets older.
Mewtwo