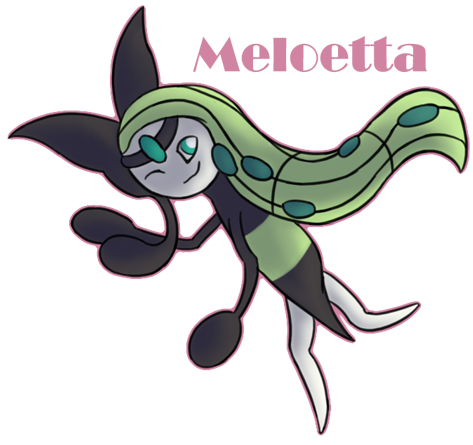 Gender:
Genderless [Refers as a she]

Pokédex Entry:
Its melodies are sung with a special vocalization method that can control the feelings of those who hear it.

Many famous songs have been inspired by the melodies that Meloetta plays.

History:
Meloetta began her life carelessly singing, and dancing to the rhythm of the various beats the world provided. She had no idea how she was born, nor why, but she didn't mind. Music was her soul, she enjoyed it, she shared many feelings with it, and she believed it brought the world together. One song she specially knew, was one that she had always played and danced along with. She was around humans often, and the people were filled with joy as they listen to this song.
It was long ago, that sorrow darkened the world, the Melody Pokémon lost the melody, and losing her red shoes.

She lost her song of joy, but danced and sang to other songs anyways, it was just not the same as the song she had played. Many many years had passed, humans have grown their culture quickly, in which Meloetta followed along, however more distant with humans. It was that one fateful night, a very late night, in a café in a city known as Castelia City. The Melody Pokémon was in there to listen to the music and dance. She was still carefree as usual, however... She heard it. That song she had always known - Relic Song, joy had once again filled her, the one from back then, she didn't know who played it, but now she remembered it. She remembered it. That was all that matter.

Shortly after remembering her song, she became more distant with the humans. Lately... They had been trying to capture her, and stick her in a tiny ball. The Legend stood away from them, but still tried to keep up with the culture. Though she had remembered the song she had loved, she was lonely.

That was when the Epidemic hit.

Meloetta didn't know what to do, but she just tried her best to avoid them rather than pick a fight. She was a Legend, feeling ashamed that she could do nothing for them.
Despite avoiding them, that didn't keep her from investigating some things. She realized some Undead/Living can sometimes have a concious, she started to believe there was some hope, turning back to music for help. Believing that she could hopefully communicate through others with it.

First things first; She needed to meet up with other Legends before moving on.

♬ She still believes that she could bring people together with music.

♬ Despite the Epidemic, she is still carefree, and prefers to just simply dance and sing.

♬ She believes that some Undead/Infected can still have a conscious, thus she does not attack unless agression is shown.

For the meantime, I shall be floating to a couple of teams as I go on my way to meet both Legend Teams, then back to floating once done ^^
Sponsored content