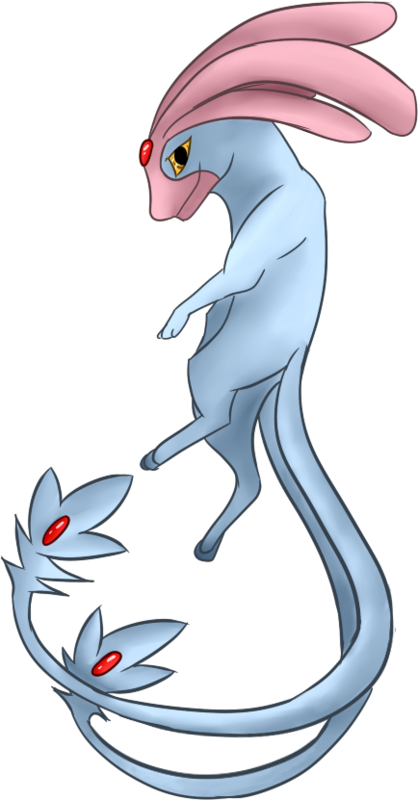 Art is a collaboration between Duma and Vincent

✥Genderless, but goes by female prefixes

✥Known as "The Being of Emotion." It taught humans the nobility of sorrow, pain, and joy. - Pokemon X

✥As the youngest of her siblings, Mesprit was the last to hatch from their egg, and after receiving orders from their father, Arceus, she flew across the globe, giving humans emotion after her brothers had given them willpower and knowledge. After her job had been done, she rested in the bottom of Lake Verity in Sinnoh, only occasionally waking due to trainers entering her cave. For the most part, the legend was left to slumber peacefully.

Her slumber was broken first by her brother, Azelf's distressed cries, and when she raced to see what was wrong, her brother was gone, and so was the lake, captured by a horrid band called Team Galactic. They captured her and her two brothers and used them to create a devastating weapon, but the villan's plans were foiled by a young trainer who set them free. The Emotion Pokémon helped the trainer be rid of Team Galactic before they could complete their plan, and then returned to Verity to resume her sleep.

Her peaceful sumber however was not to last, as the Epidemic tainted her fellow pokemon and made them slaughter one another, before returning to life and coming for the legend. Shocked and saddened by the death of her friends, Mesprit fled her Lake home, and went to check on her brothers, but was devastated to see that they too - had left.

She began roaming around the word, looking for her siblings and hoping that they haven't been hurt in their travels.

✥Looks like her regular self, with only a few cuts and bruises from a few fights. She still holds herself tall, but every so often she'll droop a little if she's tired or sore. Mesprit has the same golden eyes as her brothers, and these are often sparking with curiosity, but if she's weary, they become dull and tired.

✥Mesprit is very happy despite how the world is currently, as she believes that she has to be positive in order to save this world. Being the Legend of Emotion, she sometimes finds it hard to stay in one mood, but she is trying to stay upbeat. In some ways she can act childish, but she really just wants to spend time with other survivors after being alone for so long. She is also looking for her brothers, and hopes that she can find them.

In order to keep away from the infected and undead, she uses her powers to become invisible and she usually keeps away, unless there is a direct reason to engage the undead, she'll try to avoid any conflict.

✥Is looking for her brothers and hopes they're uninfected

Only issue I have is that the moves aren't labeled as to how they were learned. It won't hinder approval, though~ Welcome, Sister.