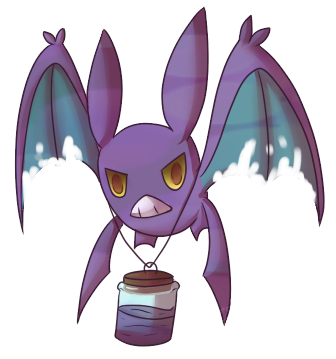 Ability-Inner Focus: This Pokémon will not flinch. Does not prevent flinching with Focus Punch.

Pokédex Entry-Crobat sneaks up on its intended prey using wings that barely make a sound. This POKéMON rests by hanging on a tree branch with its rear legs that serve as wings.(Sapphire)

History-Alucard was caught in Hoenn by a young girl named Crimson. When he was caught he was still just a Zubat and his trainer was just starting out. It wasn't long however until said trainer had collected a decent team of pokemon. Alucards team mates included an albino Rattata, a Milotic he could tell was obviously gay, a Glalie with some serious temper issues, An aggron that did not get along well with the Toxicroak, and a Toxicroak that hated the rest of them. The Toxicroak's name was Fluorine and was infact a gift from the trainers sister and all though she hated Alucard, he didn't seem to mind her tendencies.As the team grew Alucard evolved from a Zubat into a large Golbat.

Once the team had swelled in size, Crimson had decided to evolve Alucard from a Golbat, the only problem is she didn't know how he evolved, she tried everything and nothing worked. Until one day Fluorine and Alucard were arguing over who loved Crimson more, a battle ended up breaking out and in a huge burst of affection Alucard won causing him to evolve. This caused Crimson great joy, and in turn Alucard became even more happy and attached to his trainer.

Around this time Crimson had gotten into contests and decided to enter her Milotic, Yusei into the beauty contest. However Alucard didn't care much for watching the beauty pageant and decided to remain in his pokeball while the others cheered on the Milotic. It's not that he disliked his team mate he just really hated the contests and preferred to sleep during that time.

After the contest was over, Crimson went outside to find only panic. This awoke the sleeping Crobat in his ball and he became quite confused. The next thing he could tell is that Crimson had taken Yusei to the closest place to surf and fled the town. After a short time they noticed some zombie like water pokemon. This obviously alarmed Crimson and caused her to call on Alucard himself. Clinging to his wing like feet she demanded he use Fly, and the pair flew away from Yusei leaving him only his wits and a single promise.

When Alucard landed he realized they were no longer in the Hoenn region but in the Johto region where Crimson was actually raised, and had already traversed previously. Though Alucard didn't know until Crimson had said just then. As the pair progressed across the dying landscape the pair were attacked by many infected. Though they managed to fend them all off until Mahogany. When Crimson tried to access the mart she was assaulted by a wave even Alucard knew he couldn't save her from. At which point his trainer became no more than another bloody stain on the wall. Alucard moped for days at the loss of his trainer before deciding to let the rest of her pokemon loose. The group panic'd and fled leaving Alucard alone again. With a sigh he almost thought of searching for them but instead chose to remain here and help any survivors.

Finding none Alucard flew off again, only stopping in Orre when his wings tired. He found himself landing near a lab. With a great sigh the giant Crobat waddled around the lab and looked for a place to rest.
User Note-
-I plan to resurrect this character once a gold badge has been obtained.
-Named after the Hellsing vampire Alucard, not based on.
-Enjoys fighting and killing, but will only kill at the command of his trainer(or if required to save himself or friends)Who is now dead
-Does not show his sadness for the loss of his trainer anymore as if he never cared in the first place.However deep down he misses her greatly.
-Hopes one day he will reunite with all his team mates and when they do the epidemic will be over.

Last edited by NightmaresEmber on Thu Jun 07, 2012 2:22 am; edited 6 times in total
The author of this message was banned from the forum - See the message
renegade

The Underground team is in Goldenrod P:
SkeletonCupcake

So I was told. then you should probably change your team name. Not everyone reads all the teams. Or checks them.
Lugia

Terribly sorry, but unless i am mistaken, Neoven8tr has had a close save in Phenac Team, which would now be turned into a Open save, making the team closed at the moment.
SkeletonCupcake

FUUUUU fine, I'M NOT CHANGING HIM AGAIN AFTER THIS! blarg Shadow Team i guess.
Guest

Very nice design. I like the fact that he is massive compared to most Crobat
Lugia