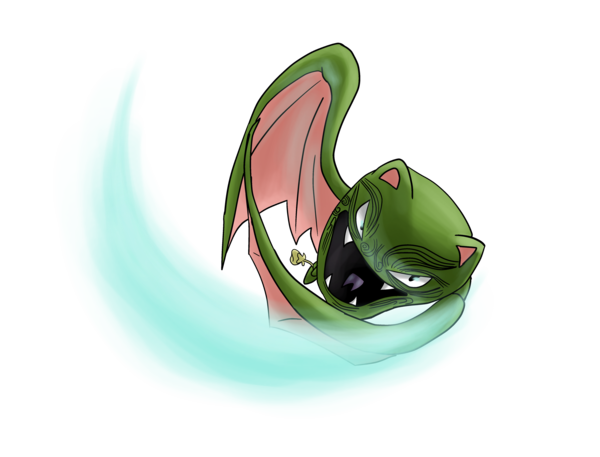 
Ponamu was born a warrior in the tribe of Zubats that inhabit Victory Road in Sinnoh. Originally migrating from Johto Ponamu's ancestors settled in the mountain long before there was any Pokemon League at all and fought with the local inhabitants to settle a place in the vast caves.
Over time the pokemon league was formed and as trainers and their loyal pokemon partners began to fight their way through to the Elite Four the tribe grew stronger.
The trainers disturbed their peace but there were great battles to be fought and much mana (respect/power) to be gained by fighting them.
Even if a bold young golbat warrior was defeated there was honor in battling the strange strong new pokemon that came into their territory and there always brother to take their place.
Pounamu was born to the cheif of the Victory Road tribe, a rogue Noctowl who took the name of Mere (war club) and his third wife Pekapeka (bat). He was born with skin of shining green like the precious greenstone that was sometimes found imbedded in the cavern walls.
As a zubat he was bold and daring, watching his elders battle and keen to join in the fray.
Through his constant battles and brave spirit he eventually learnt a powerful attack under his father's tutuion; Air Slash
When he evolved he finally got to battle trainer's pokemon.
His different coloring made him a prize and he delighted in eluding trainers grasps, confusing and putting to sleep the trainers pokemon before batting away their attempts to catch him.
When his father, old and weak, eventually passed away from disease Pounamu stepped up to replace him and lead his people.
Then one day the people stopped coming.
There were no more battles to fight, no more daring victories to be snatched from the jaws of defeat.
They were the best, the strongest of all the zubat line tribes yet there was no-one to challenge them.
Slowly they started to starve as the other cavedwellers left or succumbed to some strange disease.
There was no more of the tapu (sacred) blood to drink.
Pounamu made a desision, he would lead his people to a new cave and a new food source.
The shiny golbat knew nothing of the infection.
A small cave, barely a dent in the underground offered protection to the tribe as they migrated across the reigon. Their cheif had no way of knowing an infected onix had sheltered beneath this depression and was roused by the scent of fresh, warm bodies.
Pounamu left for a moment to scout and returned to see the last of his best warriors in shreds.
A leader without any followers the golbat was forced to flee from the battle he could not win.
With a stalagmite from the cave hidden in the pouch of shining dust a trainer had carelessly dropped Pounamu swore utu (revenge/karmic retribution) against all infected.
He would destroy them all and regain his mana even if it cost his life...

User Note- Based on a traditional Maori Cheiftan, in particular Hongi Hika of Nga Puhi tribe, the mihi is a loose translation. He has a moko (face tattoo) formed by scarring the skin into depressions and filling them with green ink. It's complexity is a sign of his status.

Pounamu often greets other living with a show of agression (haka), both to show his fighting strength and to test their resolve.
Guest

A tribal Golbat? That. Sounds. Awesome!

I really like the idea of putting in a foreign language for his tribe :3
Kaze

I really like the idea of putting in a foreign language for his tribe :3

Thank you! <3
I actually have this guy on my Diamond game (First Legit shiny I ever caught~)

lol, awesome, I was thinking how cool this was, as I live in New Zealand, the original land of the Maori. I feel so lucky to live in the same land as the culture of a Pokémon. This is cool.
Kaze

Li Syaoran wrote:lol, awesome, I was thinking how cool this was, as I live in New Zealand, the original land of the Maori. I feel so lucky to live in the same land as the culture of a Pokémon. This is cool.

Oh so you're another Kiwi? We have some pretty awesome cultural history when we get right down to it. Plus golbat+Moko=awesome.

Are you Kiwi too? that's great to see more of us, I wasn't sure if anyone on here was, and yea, you always know that it's awesome when you see a Moko on anything, then you get Golbat, with his mouth, and you could believe he is doing a haka. Yeah, our history is pretty cool.
Sponsored content