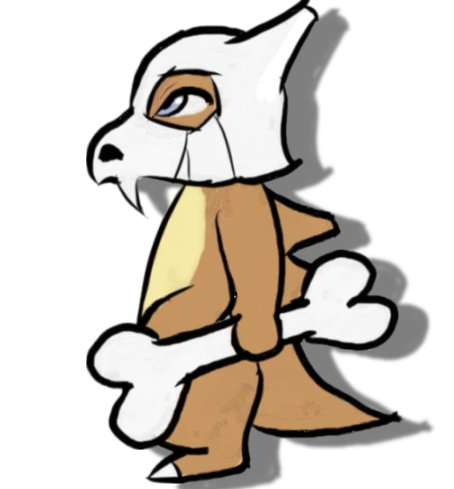 Pokédex Entry: "Cubone pines for the mother it will never see again. Seeing a likeness of its mother in the full moon, it cries. The stains on the skull the Pokémon wears are made by the tears it sheds."-Ruby/Sapphire


Item-
Thick Club (It's the bone in her hand), the Skull she is wearing used to belong to her brother he used to wear it util he evolved into a Marowak.

Hey little sis, are you feeling alone?
Matilda was born the youngest member of a well-to-do Family. Her father, a Sceptile was quite intelligent pokemon and he worked hard to provide for his family along with the support of everyone in the community.


Appearance-
She has icy-blue eyes that look around with a inquisitivity, which she most often glares with at other pokemon. Aside from that she's your run-of-the-mill Cubone. Although she is slightly underweight because of lack of food.

Personality-
Originally a very compassionate and generous pokemon, in her childhood she gradually grew very bitter with the petty torments other's inflicted on her to gain amusement. Now very doubtful of other Pokemon from being lied to most of her childhood by her peers. She hates being lied to or seeing someone doing something wrong on purpose, and in turn it made her hate them getting violent when she she is lied to. In her own words "They only say what benefits them, may Reshiram have their heads when this is all over." In her loneliness she spent her time brooding over the friends she lost and how she could have prevented it, distancing herself from making any new friends. In her trial and error many things went wrong, so now she is an avid believer of Murphy's law, she expects the worst in most situations and tries her best to cope. Many heart-breaking things happened to her in her life, so she is cold and distrustful of other's affections. She has grown cold to most minor problems in light of the Epidemic, and has difficulty sympathizing with other people's problems if they seem minor to her, and will snap at them if they complain too much about it. One other thing she grew to hate with a passion for are fools, many a fool were responsible for most of the depressing incidents in her life and will hold anyone who acts like one in very low regard. She is haunted by the death of her older brother each and every day, and whenever she thinks of him she has to try her best to keep herself from breaking down. He was her best friend, and after he died she really didn't have anyone left.

-Pokesona of myself
-Used to sing in a choir, but left because of the people who were in it. Is actually still a pretty decent singer but hardly sings anymore.