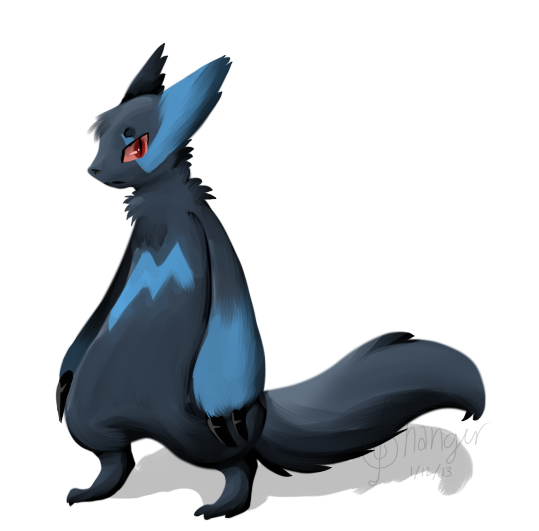 Pokédex Entry:
Ruby - "Memories of battling its arch-rival Seviper are etched into every cell of Zangoose's body. This Pokémon adroitly dodges attacks with incredible agility."
Emerald - "When it battles, it stands on its hind legs and attacks with its sharply clawed forelegs. Its fur bristles if it encounters any Seviper."

Item:
There are no items in his possession


- -- --- ---------- --- -- -
History:
The last thing his mother gave him before he was taken away by his father and an odd-ball scientist, was his very name; 'Zephyr'. He treasured it, he treasured his name a lot, because it proved that his mother met him. The name meant west winds and he took that as a hint on his mother's whereabouts, where she lived, where he was born. However, his father told the oddly-colored Zangoose that he shouldn't dare look for his mother, for that she is dead. Zephyr didn't understand what 'dead' meant, but it was something bad.

Nonetheless, his childhood was one that could barely be remembered. Memory was like an abstract painting and only could he remember what he felt; love. Love is weird, his father gave it to him, the scientist gave it to him, but what was his mother's love like? They were all different, so his mother's would be too. He longed for his mother, but he still followed his father and the scientist in their journey to settle down.

Why are they on a journey? As Zephyr grew more educated, he realized that the frail scientist was looking for purpose, a reason to be in the world. He was thrown out of the Shadow Lab in Orre, and now searching for a new job, but why bring him along? Why bring the Zangoose? Were his siblings no good? Zephyr was aware he had brothers and a little sister, however, he could never understand the reason the scientist brought him along rather than them. Were his siblings different from Zephyr? Or was he different from them? As a growing teen, nothing but questions could fill his mind, but soon were those questions discarded.

He was still a child by the time he began his vigorous training. The scientist and his father finally settled down in Kanto in a group that's notorious for stolen Pokemon; Team Rocket. The scientist had purpose and Zephyr was now going to be used for that purpose. The Zangoose felt bitter toward the now power-hungry scientist, longing for the loving fatherly scientist to return. However, it grew worse with each passing day, the scientist seem to show less love to Zephyr, and grew disappointed in the Cat Ferret Pokemon whenever he did not improve his skills. His bitterness grew to hatred as his father disappeared shortly after the harsh training began.

Years piled upon each other, Zephyr did the same thing everyday and soon was tested some experiments on. The Zangoose grew cold in personality, the scientist sent him on many missions and handle Team Rocket's dirty work. Zephyr's only gift of name was changed to 'Z.E.R.O.' otherwise Zero after his first mission. A codename so that his true identity could be hidden, and Zero would just simply be a cold-hearted Zangoose. Finally did a new arrival come under the scientist's care; a nameless Seviper. Happy-go-lucky in nature, she seemed unfazed by all the experiments and looked forward to working with Zero. He felt his blood boil whenever she glanced at her, something he never felt with anyone else other than the scientist. The Cat Ferret Pokemon was forced to suppress that dislike in order to work with her without flaw.

The Seviper was soon bullied by the other Pokemon in Team Rocket due to that nature, Zero ended up aiding her and was able to get the Pokemon to respect her one-by-one. He even gave the Seviper a name; Amaryllis. She showed great potential through her missions, it didn't take her long to climb up to Zero's level in the Team Rocket facility. They worked together, and became partners despite Zero's blood prickling at him every second her presence was in the room. However, her personality changed to one that was manipulative and sly throughout time, Zero was almost impressed with her until the Seviper nearly ended up killing him on the SS Anne. She declared war, revealing to the Zangoose on how much she truly despised him and took a majority of his actions as a mockery.

It was around that time did the Epidemic hit did Zero and Amaryllis go their separate ways. The Epidemic spread quickly throughout Kanto, it was during their mission on SS Anne did Undead began to tear apart the ship and force Zero and Amaryllis onto shore. The Poison Snake Pokemon declared that Zero wouldn't last long in the Epidemic and disappeared into the night. The Zangoose began to wonder throughout the region during the Epidemic, surviving by learning that the benefit of doubt should never be given.

"Zangoose are fairly large Pokémon that have the characteristics of both mongooses and cats. Their fur is mostly white in color, but they possess deep red markings on the face, chest, and forepaws, which have sharp turns and edges. These markings make it appear that Zangoose has been involved in a vicious fight and is covered in blood and scars. They have two apparently retractable, long, sharp, black claws on their forepaws that are their main weapons in battle. Zangoose have large pink eyes, small tufts of white fur on their shoulders, somewhat rabbitlike ears, and a large, furry, white tail. They also have a pattern of four pink circles on the underside of their hind feet in a "paw-pad"-like arrangement. When a Zangoose opens its mouth, two sharp fangs can be seen."
-Zangoose's Bulbapedia Entry

Streak-black fur with a shocking electric blue, Zero's appearance is what greatly differs him from other Zangooses. However, his height is one of an average Zangoose and is underweight due to malnourishment and lack of food. Despite giving off the appearance of one that is constantly under irritation (ruffled fur and a frown), he can sometimes be seen as a child at times due to his nature of constantly dozing off and wondering around.

"Zangoose are bitter enemies with Seviper, and the two will battle each other to the end. It is suggested this rivalry has lasted for ages. It will usually walk on all fours, but when angry, it will stand on its hind legs."
-Zangoose's Bulbapedia Entry

Adorned with a poker face, Zero is often portrayed as a 'lone-wolf' character. Rarely did he socialize with other Pokemon when he did his dirty work for the scientist, and with the contribution of the Epidemic; he hasn't said a word in over a year as he barely came across survivors. Rather than words, he prefers to express his various emotions through his actions, as some would say; "Actions speak louder than words". Evidently, he gives off the inimical vibe as he judges and evaluates the situation silently.

Zero often followed the saying; "Shoot first, talk later", feeling better that it would be best to safe than sorry. As he believed that there were barely any survivors in the Epidemic, he solely focused on survival (Applying the Survival of the Fittest Theory) and doesn't make any second thoughts. Throughout his time in the Apocalypse, he survived on expired snacks in abandoned (and often looted) homes and the berries that are far from water sources.

However, there is a downside to his cool, yet hostile demeanor: Emotions can get the best of him. Often enraged when the young or his colleagues are set in a dangerous situation and takes responsibility when his actions lead to the worst endings as he feels at fault. Through his need of protecting the young and the weak, he shows a rather unusual soft-spot towards them.

- -- --- ---------- --- -- -
User Notes:
-> "Memory is an abstract painting" quote is a reference of Eugenia W. Collier's short story; Marigolds.
-> Zero's codename originally originated from the name of his first mission along with the fact of how he has zero control over his life and how he is a considered 'one without identity'.
-> During his wondering times, he discovered the scientist he loathed was ripped to shreds by Undead.
-> Zero was transported to Orre through a mysterious power.
-> Current Profile Picture is made by Clefhanger.
-> Credit to Lost Eventide and Karkailse for Profile Layout

The profile is done and ready for approval. Moving to the main profile computer is much appreciated.
Mewtwo