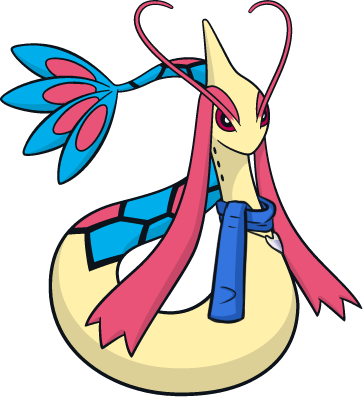 Pokédex Entry-Its lovely scales are described as rainbow colored. They change color depending on the viewing angle.

History-Yusei was hatched by a trainer named Crimson, her parents a male Hydreigon named Danny, and a female Milotic whose name was Lilium. Little Yusei was very excited to hatch but the ugly little Feebas hated herself for her own hideousness. She wanted to be a Milotic like her mother and be beautiful as her. Crimson however saw fit to keep her as a Feebas for quite a while so he could play with Alice the Rattata and not hurt her.

Eventually Yusei did get her wish however, Crimson fed her many poffins she had made during her travels around the Sinnoh region. When she was tired of eating the poffins Crimson took her out and battled her against weaker pokemon, not wishing to use rare candies to level up her beloved pokemon.

When Yusei did evolve, Crimson continued to train Yusei everyday, making her strong as well as beautiful. Then the day came when she entered her first contest, Crimson gave him a Deepsea tooth for good luck and a Blue Scarf for charm. At the end of the contest, Yusei had won to her surprise. The pair were awarded the blue ribbon for there efforts, and Crimson put the ribbon away in a special case to keep it from being ruined.

When the three, Crimson, Alice and Yusei stepped outside they noticed everyone seemed to be in a panic. When Crimson asked what was wrong they man only replied in a screaming manner about some sort of undead pokemon pandemic and everyone was to evacuate and release their pokemon. Crimson refused and called Alice back to her pokeball. Yusei and Crimson made their way to the water outside the city and used Surf to escape the chaos.

Along the way the group where attacked by many odd looking pokemon that seemed to be much like the monsters everyone was in a panic about. Calling on Alcuard her Crobat Crimson flew away and left Yusei on her own. Her last words to her were "I'll survive if you survive." Yusei, also traveled to Pacifidlog town only to find it in ruins. All the Corsla that had held it up before either fled or turned into monsters. Yusei searched the towns wreckage for survivors, but everyone had fled.

Appearance-
Yusei is fairly average however she had her 'hair' (what even are they called?) cropped to make her look male. She wears a Blue scarf around her neck with a Deep Sea Tooth tied to it. Other than that, she is fairly normal for a Milotic.

Personality-Yusei is a fiery, passionate creature. She always puts her heart into things she enjoys. However she is also very easily angered and often retaliates to the smallest things such as tiny insults from a certain Tentacruel.

She isn't the type to care much about others or what they may think either, and if someone is not competent enough Yusei wouldn't even consider taking orders from another.If they tried to boss or order her about the offender would probably receive a harsh slap in the face from her tail.

User Note-
-He is outwardly gay(Disproved because he is actually a She)
-She knows Alice the Albino Rattata, the two have been friends since they were little.
-She is very fond of her trainer Crimson and hopes her and the rest of her friends are okay.
-She is especially worried about Alice because Crimson never really trainer her like she trained her.
-Giga Impact was self taught via TM in the RP.

Hey Everyone I am back. I would like very much to pull Yusei from Inactive and toss her back on Pacifidlog if that's okay.
Mewtwo

Since it is a reactivation, you will need to edit in the new fields to match our current profile system.

Updated. I believe. Thanks Mootoo *hugs the mutant kitty spawn with the giant spoon of badassery.*
Mewtwo

Yes he returned Yusei to me *derps*
Mewtwo