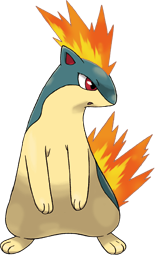 Name: Blaze
Level: 27
Gender: Male
Moves:
Flame Wheel (level 20)
Quick Attack (level 13)
Flare Blitz (egg move)
Flame Burst (egg move)
Ability: Blaze
Nature: Mild
Characteristics: Highly Persistent, Capable of taking hits. Doesn't give up even when things are bad.
PokeDex entry: It intimidates foes with the heat of its flames. The fire burns more strongly when it readies to fight.
NationalDex Number: 156- Quilava
Item: Typhlo-Seal(Given to him by his mother before she died.)
Height: 2'11"
Weight: 41.9lbs (may increase or decrease due to situation of famine and not being able to eat all of the time.)

History:
Blaze grew up having an Arcanine father and a Typhlosion for a mother. Blaze's father had always wanted a son, but only a son that was a Growlithe. At an early age Blaze always tried to get his fathers attention by showing him one of the moves he had inherited from him, but he never cared. Blaze set a goal that he would evolve to prove to his father he was worth something.
One day when blaze had finally reached his goal of becoming a Quilava, but his mother had come down with a terrible sickness (not the zombie-virus) and soon after dies. All she left was memories and a Typhlo-Seal. When Blaze's mother died so did the egg that was supposed to hatch a healthy, strong Growlithe. Blaze thought that his father would have left him after that, but instead his father started to care for him.
Blaze had grown stronger and faster with the help of his father, but his joy was short-lived. A day came where they were traveling through Johto a group of greasy, bloody things attacked them. Blaze's father told him to run away from the scraggly bird looking monsters. Blaze ran as far away as he could go. only to see humans, and Pokemon alike to fall.

Last edited by torchie96 on Mon Feb 20, 2012 7:03 am; edited 1 time in total (Reason for editing : added 'Whirl' next to Johto)
The author of this message was banned from the forum - See the message
renegade

I woulds say New Bark, but it's closed.

Personally, I think your character would fit in better on Whirl.
Suicune