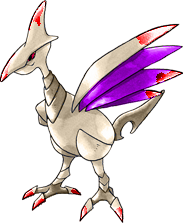 History:
Wedge was a regular Skarmory, with normal coloring and a normal threat around Johto. He enjoyed scaring little kids and snatching loaves of bread when the bakers weren't looking, and basically just creating overall mayhem to the places he visited. The Skarmory wasn't exactly looking for trouble; instead, he was looking for the rightful owner of his strength.

And indeed, on one of his rages, one boy, accompanied by an Eevee, stayed his position and stood the angry Skarmory up. He did not get angry though. He fought against the puny Eevee, thinking he could beat such a small Pokemon, but he was proved wrong as time and time again this small animal jumped around his attack and slowly defeated him. He conceded with the trainer, being called Wedge for his sharp wings and swift movements.

Wedge grew to believe that his trainer, who he faithfully called Master, loved all his Pokemon with a promise they would get stronger. They of course, but soon enough, the epidemic started popping up in Johto, and the whole of the team was fighting for their lives. It came a day when Master, with tears in his eyes, told Wedge to fly back to Kanto and find his parents. The Skarmory only wished for his friend's happiness, and went off immediately.

But he no sooner left with his choice in mind was he mobbed during flight with flying infected. Wedge fought them off, but slowly they gained on him. The zombies aimed for his wings, probably hoping to make him fall to his death. The Skarmory quickly fled when an infected Charizard burnt his right wing. When Wedge landed from pain, he quickly attacked his right wing, until it fell off. It hurt like Arceus' wrath, and his empty screech could be heard for miles. Over the few months that followed, Wedge forgot about Master and his teammates, he forgot about loyalty and friendship, and could only think about dipping his silver wings in bright, red blood. Wedge's color slowly changed- his red wings turned purple, and his shiny silver wings turned brown from slight rust creeping in. And all he could think about was death.
User Notes:
- Tutor moves were taught during his time with his owner
- Wedge had the same owner as Koin (Jolteon)
- Wedge can sometimes remember his old life or can speak a few words, but otherwise he's very zombie-like

If I may ask why his wing changed color?
Is it because of the virus?
Negative10

'Cause of the virus. Should I elaborate on that more? D:
Suicune

Well, since Plague the Umbreon was infected with the virus and his rings turned purple, I figure we should stick to purple as the color of the viral strain.
(Purple is being used by our artists for certain viral elements in the dex entries and such as well, to stay consistent)
Would this be satisfactory to you?
I would like more elaboration if this doesn't work for you.
Negative10

I won't mind at all! It'll be difficult thought to find a Skarmory picture with purple wings... I suppose I could ask in the Artists' Alley.
Negative10

Very nice!
Okay, you'll be added to the Union team, as the last member.
Your turn will be after the Riolu.

Just so you know, Negative, when you kill off a charrie you should contact the Profile Moderator. c: [AKA, Latios, pretty much~]
Negative10

Dx Whoops! Thanks for the note, Slange!
Suicune

In this case, you are to address Latios.