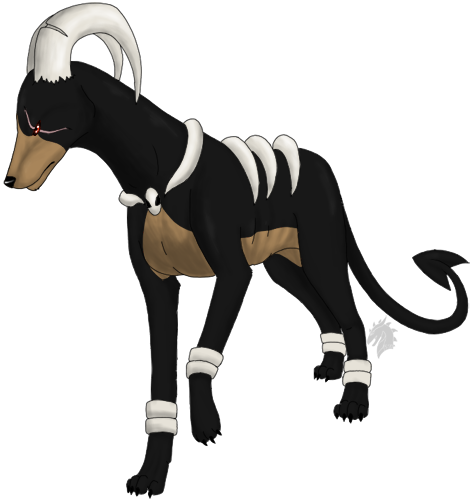 Pokédex Entry
The flames it breathes when angry contain toxins. If they cause a burn, it will hurt forever.

History
Luke was born in Johto on Route 45, where he has lived with his pack ever since. Luke was a very stubborn pokemon back when he was still a Houndour. He would always get into fights with pokemon that were far bigger then himself. Though these fights always ended with him being seriously injured, but he almost always came out the winner that he concidered the toughest pokemon on the route, till be finally met his match. A Skarmory has come onto the route, and being a steel type, Luke instintly challenged it to a battle, though the battle didn't go in Luke's favor. Luke ended up getting beaten half to death, getting the scar over his eye and causeing him to have to flee, though the steel bird was relentless as it gave chase after the Houndour. He was finally at his limit when he collapsed, ready to accept his death.

When he woke again, he wasn't dead, but in a pokemon center. He had been bandaged up, and he couldn't see out of his left eye, though there was no damage to it, he couldn't see out of it cause of the bandages and, he hurt all over. He couldn't move, though he could still hear well. He could hear talking out in the hallway, though he couldn't make out what he they where saying. A few moments later, a human walked in, a young boy. The human was saying things that he couldn't make out, so he didn't bother, though he did growl when it got too close. It seemed to be talking to him, as though trying to make Luke feel reasured that he was going to be ok, and how could he feel ok? He lost to a pokemon he was supposed to be strong againsed, and what of his pack? They where probably missing him, but how could he face then like this, he would never be able to go back and face them again knowing that he was nothing but a dissapointment.

With no other option, Luke decided to tag along with the human, Jay. Pokemon owned by trainers always where strong, so being with him could mean Luke could also get stronger, strong enough that he could beat even a type he is weak againsed. He would continue fighting strong opponents until he is ready to once again take on that Skarmory, and win this time. But after he evolved into Houndoom he become smarter, knowing when enough was enough, and quickly gave up on his revenge againsed the steel flyer. His trainer knew that more then anyone after being with him for a year. They were very close and very best friends. His trainer was really happy when he evolved into Houndoom. Luke has been to many places and seen many regions through his travels and met many different pokemon. He thought things couldn’t get any better.

About 3 years after leaving Johto, Luke and his trainer returned to there home region, not knowing that everything they once knew had changed so much. They had never herd anything about the infection so they didn’t know it was dangerous to return home. Once they got to Violet City, the place in which his trainer was born, they knew right away that something was wrong. The streets that were always so full of people and pokemon were now empty and lifeless, or so they thought. It was then that they heard a horrible screeching sound from behind them, and when they turned what they saw coming at them was a Fearow, only it had bright glowing eyes and looked like its feathers were falling off as it flew. It tried to attack Luke but he moved out of the way faster then it could fly and only just grazed the top half of his horn leaving a deep crack, but his trainer wasn’t so lucky. It had grabbed his shoulder and carried him up so high you could barely see them. Then without warning dropped him so he hit the ground hard. Luke ran to his trainers side to see if he was all right only to see that he was dead. He fell from to high up to have survived it. Enraged at what the Fearow did to him he turned to face it as it came it for a second shot at Luke. But before it could get close, Luke used his Flamethrower attack that he and his trainer worked so hard for him to learn. It roasted the bird in flight, causing it to fall to the ground as it cooked alive.

Luke knew that his peaceful days back when he was younger were no more. That he was going to have to trust no one any longer and suspect everyone as a possible threat as he roamed Johto, and other regions, looking for anyone that could still be one of the living, and a place that could be safe.

Appearance
A normal coloured Houndoom with crimson red eyes. Has a long scar over his left eye as well as a deep scar like crack in his left horn. Always as this serious, almost angry like look on his face.

Personality
He's a very lonely, and serious guy. After the death of his trainer, he has withdrawn himself from everyone around him, never getting to close as to not feel that pain of losing someone dear again.

User Notes
The scar on his face was not caused by an infected. He got it back when he was still a Houndour.
He tries to avoid using attacks that cause biting, for obvious reasons.
He avoids talking about how he got the scar on his horn as it brings back the bad memory of his trainers death.

Approved.
You'll be placed on the Union Team, and your turn will be after the Sandslash.
Guest

Welcome back dear. But I'm afraid since this is a reactivation it has to go through a new approval and there are a few things that need doing with this profile:

Image needs to have the item showing, even if it is just a berry.

Appearance section is missing from the profile. Please update.

Dark Pulse cannot be learned by TM by his species in Gen V, which are the rules he qualifies for. Only by Tutoring.