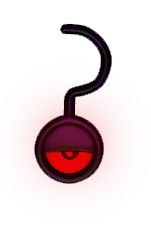 Name- Quest
Gender- Genderless
Level- 20
Moves- Hidden power (Psychic)
Ability- Levitate
Nature- Docile
Characteristics- Often lost in thought
National Dex No./Species-#201, Unown, The symbol pokemon
Height- 0.5m
Weight-5.0kg
Pokédex Entry- "This Pokémon is shaped like ancient text characters. Although research is ongoing, it is a mystery as to which came first, the ancient writings or the various Unown."- Emerald
Item- Smoke Ball
History- Quest was hatched in the Ruins of Alph alongside his 25 siblings. He lived a simple life, sleeping on the carved walls and playing at spelling words with his siblings. Most trainers never bothered capturing Quest or his siblings and very few battled for long. It was a dull but content existence and Quest never wanted for anything.
But then the infection began and there were less trainers to explore the ruins, less scientists to admire their shapes and forms.
And the young Unown grew curious.
Then one day another Unown approached. It was an Unown like Quest hadn't seen before, it had the sleekness and strongness of a trainer-raised pokemon and it's body was a deep blue.
It's name was Anger and it explained what had happened, how this wave of disease was sweeping the land and Quest and his siblings had agreed to let this strangely colored Unown rest with them in the safety of the long since destroyed ruins.
Yet this Anger never became one of the family, it left often to check on the area ruins and to drive off other pokemon.
One day Anger returned different, he floated slower and one of his legs was missing. By focusing together the Unown managed to heal the wound but, unknown to them, the disease still lingered.
First Bear began to feel dizzy with bloody bite marks appearing as they slept. Then Chase and Direct until only Quest was left alone against the might of an entire colony of infected Unowns and when Quest too succumbed to the disease they Unown started thinking.
Only together were they strong yet with their ability to warp time and space what bar a legendary was stronger then a colony of infected Unown?
Why linger here when if all Unown were to be converted surely there would be flesh for all for ever more without having to wait for meager sustanence to enter the ruins.
The colony divided, each individual letter branching off in search of another colony to infiltrate and infect and gathering their power the Alph Unowns scattered themselves across the world.
Quest was the last to arrive at a destination, the scent of unfamiliar trees on the wind and the shapes of buildings so different from the ones it remembered. This was Unova and Quest was so, so curious about this new place.
Approximate time of infection- Three weeks
User note- Quest is a very nonagressive infected. It is only looking to infect unowns and ignores most other pokemon.
Quest is highly curious and speaks almost exclusively in questions.
Quest can communicate wit the other infected Unown from over large distances and often says "We are Legion." when using Hidden Power.
Quest loves hovering over the head of other pokemon when they are feeling puzzled.

Intriguing. However, I have a few concerns:

Your Infected will not be able to keep up with the other Unown telepathically for long. Quest's, as well as the others', minds will deteriorate to the point where words will fail. The unison will fall apart, and you will have to remember the shelflife of your infected. Do not make him last longer than he should.

This also goes for his non-aggressive behavior. It will need to deteriorate with his mind, as all Infected crave flesh.

As long as you keep these aspects of your character in mind, you're set.

Requesting this to be moved into inactive until there is an available spot in a Unova team.
Kaze

Requesting this to be moved out of inactive now there is a Unova team with open spots.
Kaze

Please may I have Quest moved out of inactive and into Living Dead as part of the Dreamyard team, seeing as there are now open spots?
Honchkrow