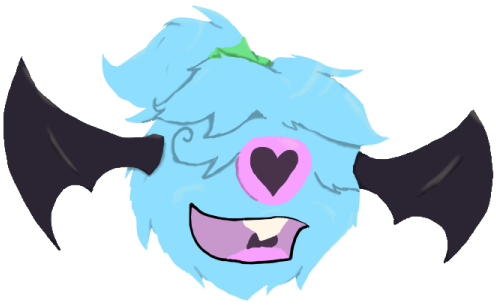 History- Natasha was caught at a young age and raised as a contest Pokemon. She and her trainer were never very good friends, though they worked well together under the spotlight. Outside of the contests, they hardly even interacted. Not long after Natasha learned Psychic, her trainer realized that surely any Woobat would have evolved by then. In a desperate attempt to evolve the bat Pokemon, Natasha's trainer took the two of them out for a training session in the forest.

At one point, however, they were ambushed by a swarm of infected Beedrill. Natasha had never heard anything of the infection before then, so she was confused and terrified when the bugs started to attack them so ruthlessly. With a well-placed Gust, she was able to burst away from them, but when she turned back to help her trainer, she realized that there was no way that she could take all of them on by herself. She got away while she still could, able to tear herself away because she'd never properly bonded with her trainer.
Appearance- Natasha looks not much different from any other Woobat, although she'd had her hair styled into a short ponytail with the green scarf that she'd gotten from her trainer.
Personality- She's clever, and uses her wit to help her when she has to battle. When she's faced with an opponent too strong, however, she is quick enough to escape them. She's not quick to trust others, but she knows when it is better to stick around other Pokemon. She's a strategist, and tends to be rather sneaky in her ways, but her bright coloring doesn't allow her to blend into darker areas very easily. When she can hide, however, nothing amuses her more than jumping out at someone to scare them.
User Notes- -Because her first encounter with the infected was the swarm of Beedrill, she has a fear of bug Pokemon, and hates to fight them.
-She's very good at detecting motion by using her ultrasonic waves.

You will need a transparant image, if you need help post a request in the Artist Alley.