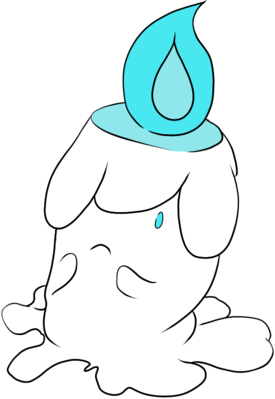 Pokedex Entry: While shining a light and pretending to be a guide, it leeches off the life force of any who follow it.
Level: 16
Ability: Flame Body
Nature: Timid
Characteristic: Alert to sounds
Moves:
-Will-o-Wisp
-Night Shade
-Fire Spin
-Confuse Ray

History: Wil may be young, but he has experienced pain...

Wil was born in Unova, for starters, in the wild to a female Chandelure and a male Reuniclus. The parents wanted to keep their children safe from harm, but when Wil was born, he turned out to be a shiny Litwick. His flame was blue instead of purple and his eyes were green instead of yellow. The parents knew already it was game over for the Litwick. But instead of protecting him, he was neglected. He was bullied by other pokemon for being different, and his parents showed no support for him. Tired of the abuse, Wil ran away from home. As time passed, however, he grew weaker and weaker from hunger. He finally collapsed, just waiting to perish and his flame to go out.

In his sleep, Wil was picked up by a passerby, who saw the poor condition the Litwick was in. Though the person was unable to keep the Litwick,he brought it to a rescue shelter, where other pokemon could be adopted. Wil found himself in there. One of the pokemon explained to him that he could have the chance to be adopted by someone, and this made the Litwick very happy. He thought that this was his chance at finally receiving the love that he desperately seeked from his parents but never got. And once again, Wil didn't get the love he wanted...

As time passed, Wil wasn't picked. There would always be a cute Lilipup or a strong Oshawott, someone to always outclass Wil. Nobody even noticed that he was shiny. He was losing hope that nobody would want him. The adoption place closed down due to a lack of money. Wil was the only pokemon left at the time of its closing. As the former employees went home, one of them noticed that the Litwick was still there. It was the only place he knew as home. The employee, Amy, offered to take the Litwick home with her. Wil happily accepted and everyone was happy.

A few days after he was brought home, something terrible happened. One night, Amy was murdered by someone who broke into her house. Wil, who had witnessed the entire event, ran away. He was so sad that his only friend was gone, that he was now starting to give up on life itself. His state of mind was still fragile going into the Epidemic. He now lives a life of fear, just looking for a friend, because if he doesn't, there's a chance he may not make it...

Personality: Emotionally, Will is a train-wreck. He hasn't felt any love or care towards him at his young age, so he has become scared of everyone bigger than him.

Wil is ready to be moved out of WIP and checked for approval.
Moon Moon

o0o You just basically described the history of my pet cat. Except the part of me dying though ;)
Guest

Oh my god, that is funny. I honestly came up with the history during lunch today.
Mewtwo