By requesting in the comments for a money commission, I will PM (or on Skype if you'd prefer) you information on my Paypal. I require payment before giving out the art.

First come, first serve. The first three slots are for money commissions and the last two are for edits. I usually get my commissions done within the week, or at most 2 weeks. (Two weeks are more common with full pictures rather than profile images, but those can last for about 4 weeks at most.)

Down payments available for cell shading, painting, and full pictures. (Pay half before, pay half after.)

ALL COMMISSION PRICES ARE IN USD

Edits:
Profile: 50 FP per character (free for newcomers with < or = 3 characters)
EJ Icon edits: 50 FP per icon edit, 75 FP per from-scratch icons (original art by PiNkOpHiLiC, all credit of Pokemon/Human bases go to them)
Character Sheet Icons (any specified size): $2.00 per character/30 FP per character
Simple image edit of Bulbapedia Pokemon images to fit a character. Can include complex color schemes or items.

(Original the Character, do not steal. ;D) 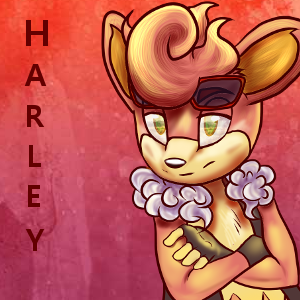 A picture of a paper sketch (not scanned, just yet) of a character. Generally unrefined and not meant to be a profile picture. But you can use it to trace over a new picture for their lines (or commission someone else for that, as long as they credit my sketch work.) For fun and not meant for new profile use, they're worth 400. 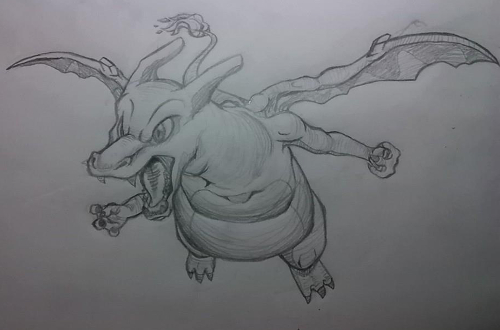 White background picture of a character. Can be colored in by someone else, I can send a PSD file for it. 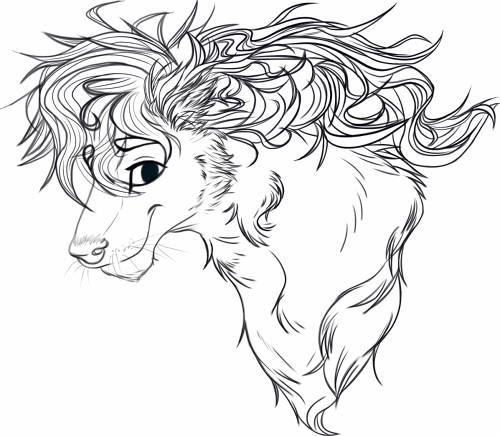 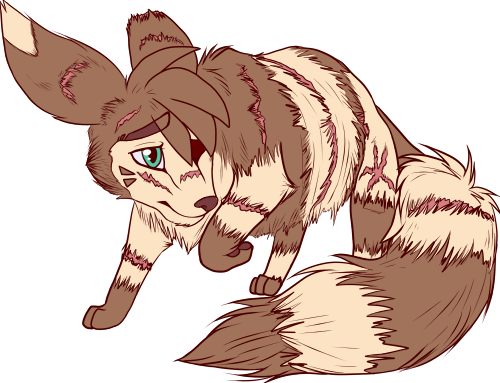 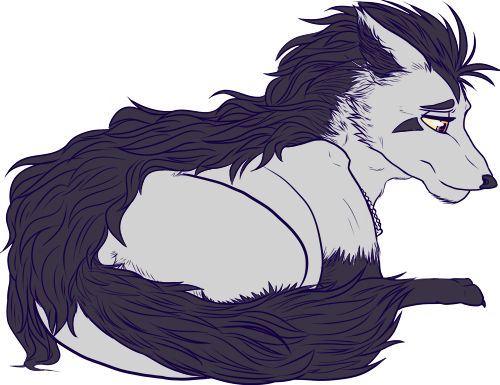 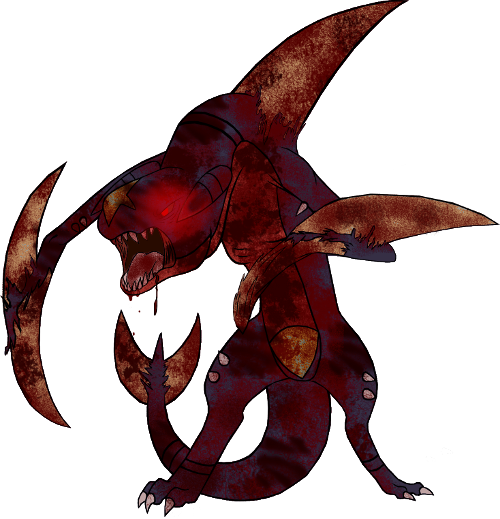 Sprites made custom for characters. Party sprites are the small 40x40 sprites (small edits of these sprites can be FREE). you can choose them to be animated or not since they're two frames. The 96x96 sprites are the game/battle sprites. I can also edit X/Y sprites and Pokemon Conquest sprites for the same price as not-animated 96x96 sprites. I can also make small sprites of character images for the same price previously mentioned. I do not make edits of animated X/Y sprites. Custom Large Sprites are very time consuming so hence the large price boost. Animated Custom Sprite are vastly time consuming as well so twice the price.
(My custom large sprite is a WIP, but a preview all the same) 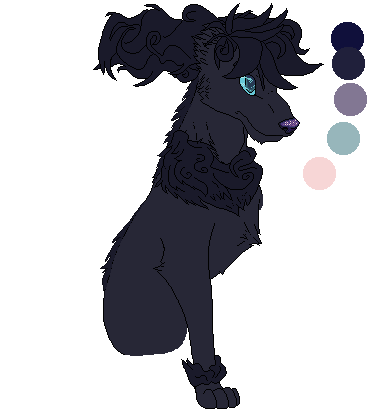 Cell Shading:
$20.00 per character
Precise shading with solid color. I usually use gradients for more atmosphere. 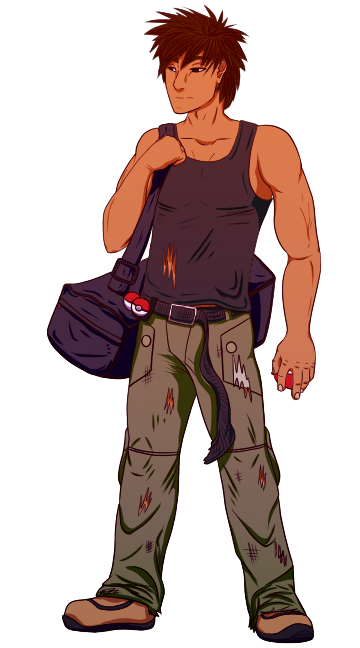 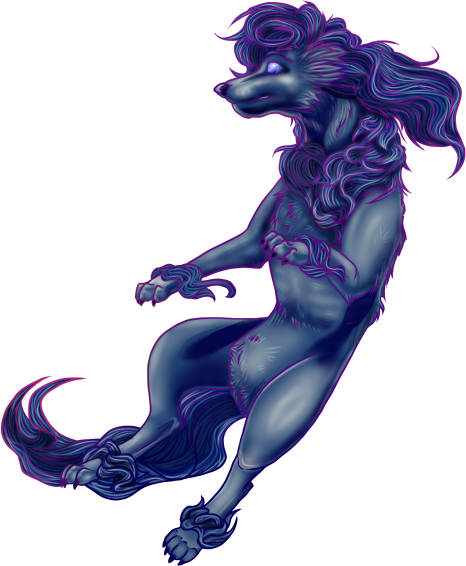 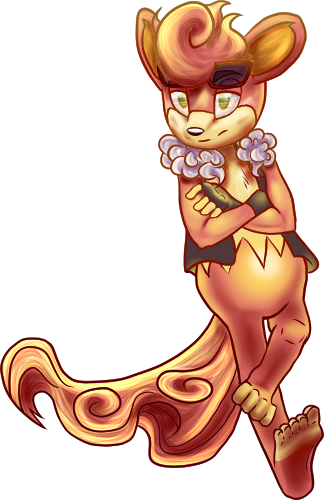 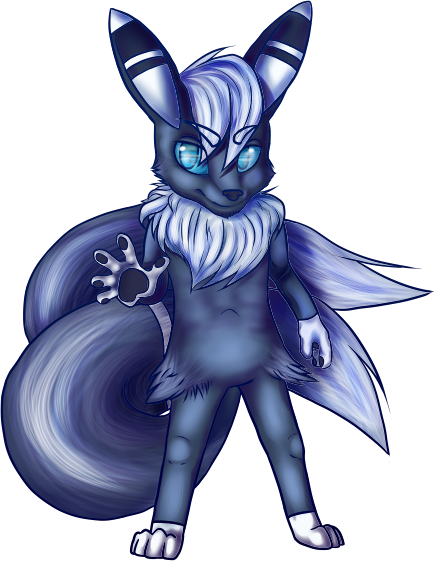 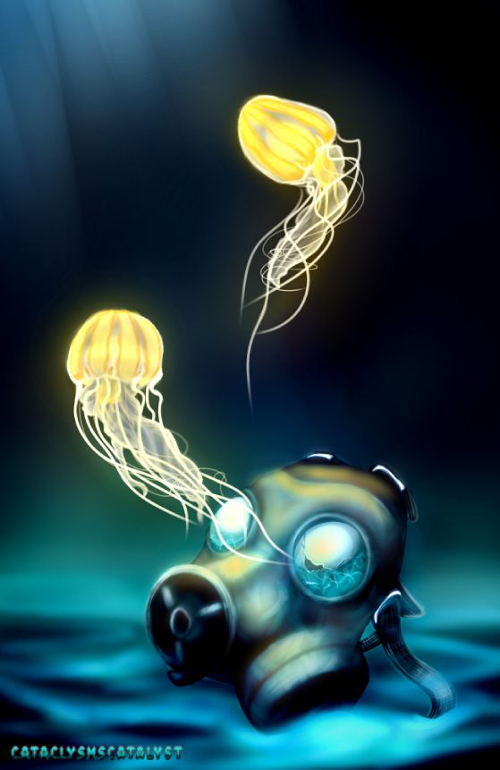 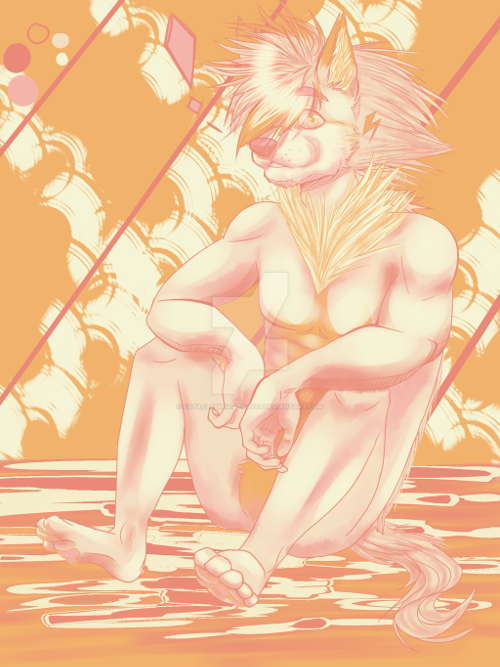 I'd like to commission a dual flat color profile of Joshua and Julian.

Joshua reference: https://i.imgur.com/JauZJ3i.png (His left eye is missing and he has a necklace now with a blue opal pendant.) He should look terrified. and probably laying down or crouching.

Julian is a dark blue furred Zoroark with a black mane. The red markings(and claws) should be a deep purple hue, and on his back he has a jagged deep purple scar. He's also a lot taller and a bit thinner than normal zoroarks(he's 6'2" vs the normal 5'3" ignore his profile that's just place holder info.). Julian wears a black silk tie. He's also super floofy. He should look protective and concerned.

Here you go~ Thanks so much for commissioning me! <3 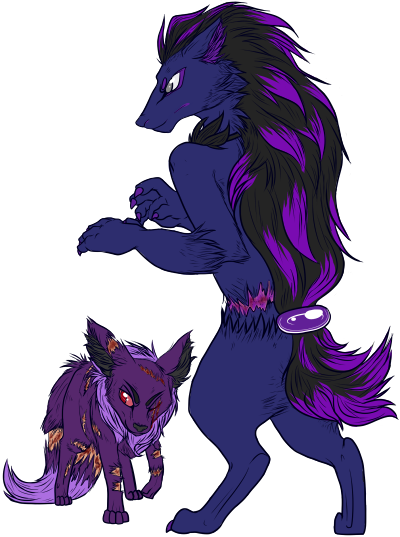 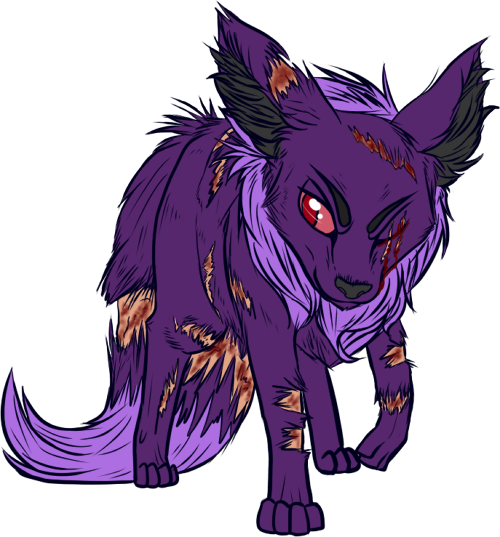 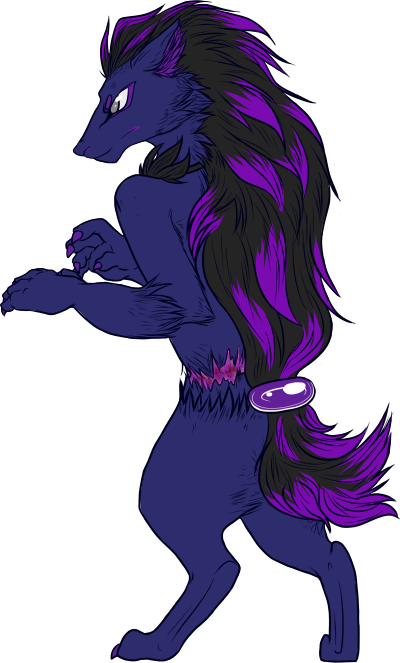 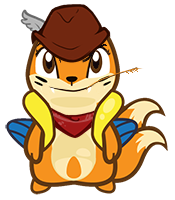 I am interested in commissioning you for a sketch. Would it be acceptable if afterward I lined/colored/shaded it myself to use as profile art? Of course I would make sure to give you credit for the sketch if I did this.
_________________

Awesome, thank you! I will pay with FP.

I am looking for a sketch with two characters: http://www.epidemicjohto.com/t5181-capulet-the-zangoose-montague-the-seviper

Alright, awesome~ Well, for two characters, it'll be 200 FP (because you have two characters, which are 100 each; 200 for each is calculated by complexity of a character design, and your two aren't too complex in design to charge that.) I'll give them to you hopefully within the week. (Sorta bogged down with classes right now. Hoping to have time next weekend.) Thank you again!
_________________
Catalyst

So sorry Duma and Nyrazerx, I have had a hard couple few days and been trying to find motivation. I will be starting up tonight and I expect to at least finish the art trade, and possibly the sketch. Thank you both for being patient!
_________________
SkeletonCupcake

Since I know you need the points. I'm going to sketch commission you.

I just need a dragonite with a feathery ruff around his neck, the feathers also cover a little bit of his wings and his antenna things(since they were feathery wing floofs as dragonair |D). He should have very large wings like charizard size or something?|D and the Delta Rune as a pendant carved on Dragon Scale. :3 Feel free to take any creative liberties if you wish.
Catalyst

Sorry for the wait! It's done! I hope the pose is alright with you! 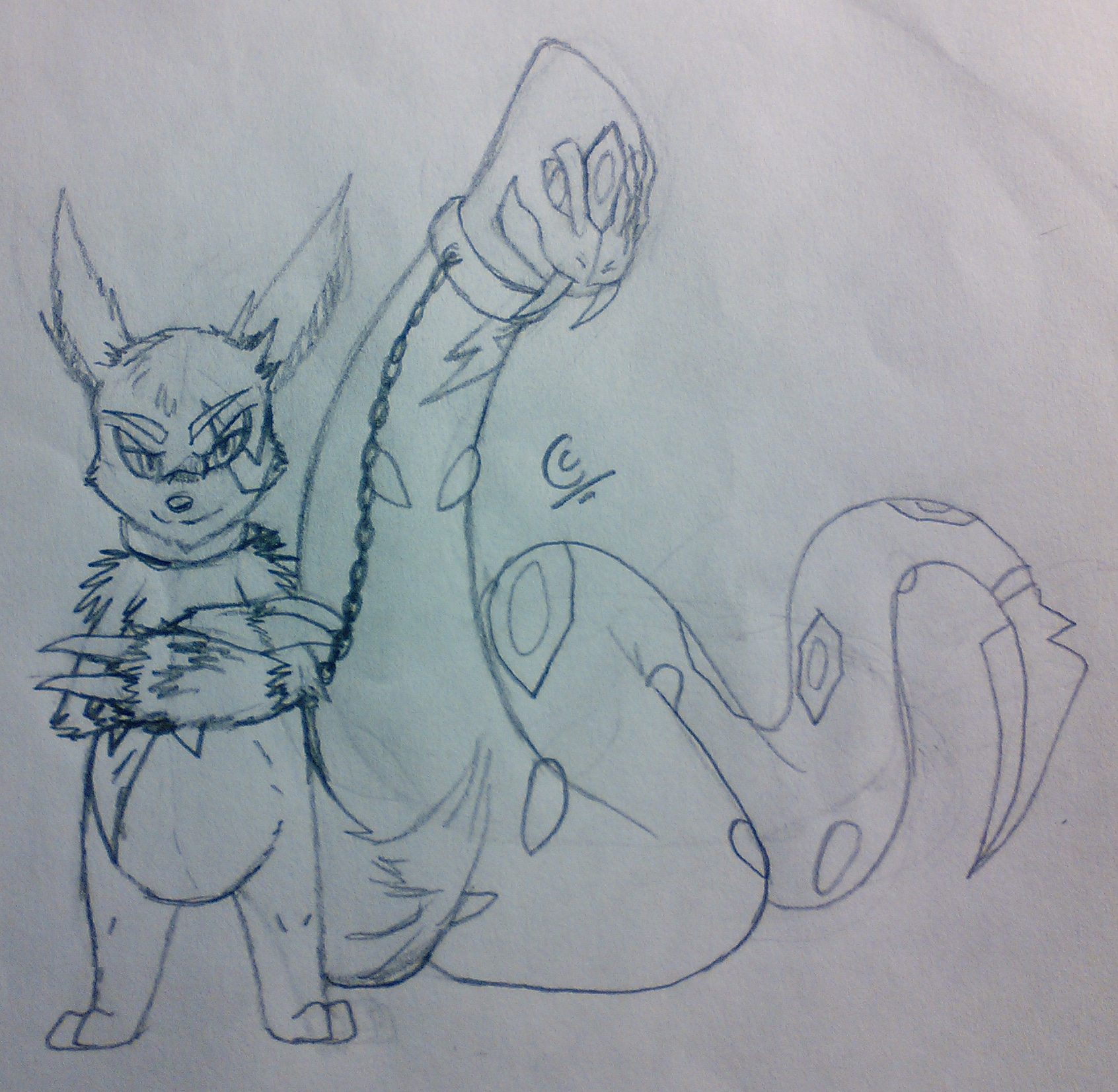 I'd like to comission a sketch of my friendly gator please c:
Catalyst

Not a problem! I'll pay you half upfront and the rest after, that cool with you?
Catalyst

Thank you!! I look forward to seeing your work c:
Catalyst

Here you go Moon Moon! So sorry for the wait! 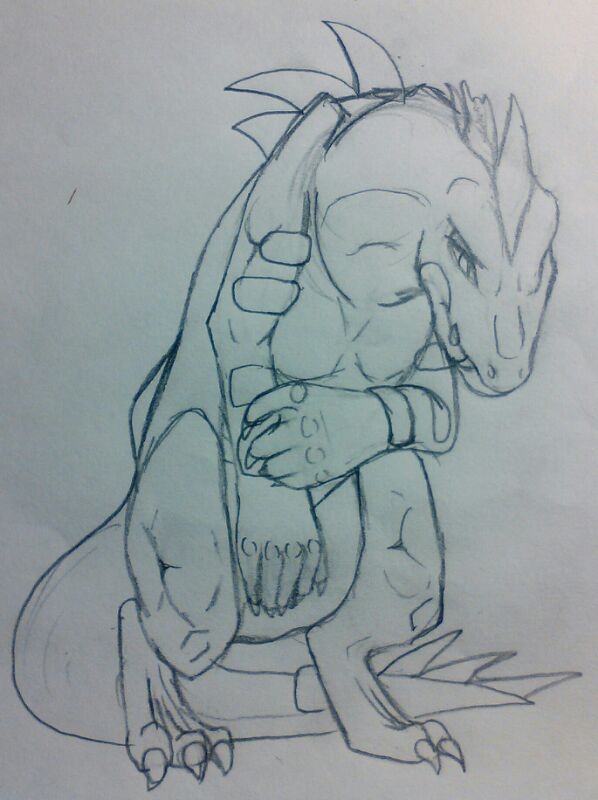 For the holiday freebie can I get a lineart of Kinah the Mienshao from you?

I need a pose that shows off her gruesome, scarred over eye (location of injury is in appearance section) and an angry expression ^_^
Catalyst

Well Uh if we want to do that water team any time soon I'm gonna need art for my characters ;w;
Mind if I snag a free lineart for a tentacruel and milotic? The Tentacruel(anzu) should have a tattered blue scarf, and look kinda elegant but grump. The Milotic(andy) should look shy and be holding a Life Orb in his tail. Both should be a bit scarred. Danke ;w;
Catalyst

Is your holiday special still available? If it is, and it applies to duals (Ill pay $$ the difference if it doesnt) could I get a flat color of TinyDragon and Lone? TD is gentle and Lone is a piss-face.

Could I also get two sketches, one of Nikora & George and the other of (only) Rush?
Nikora's profile is a bit outdated. Her stomach cavity was opened and her organs are starting to hang out, plus she's crazy now.

On top of those, could you make an avatar edit of Sorrel?

Sorry to ask for so much. Completely understandable if its rejected. ^^;
Catalyst

Oh goodness, I never saw this ;w;'' I'm so, so sorry. Do you need me to make this art still? For the fact I completely missed this, I'll do the sketches and icon edit for you for free. And yeah, the flat color picture will also be free. Happy really, really belated holidays. ^^;
_________________
Sponsored content