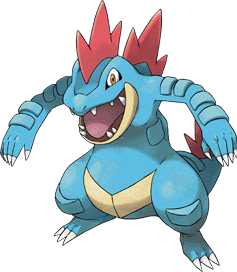 Name;
Rufus
Gender;
Male
Level;
Level 53
Moves;
Crunch, Ice Fang, Slash, AncientPower (Egg)
Ability;
Torrent
Nature;
Lonely
Characteristics;
Often lost in thought
National Dex No./Species;
#160 Feraligatr / The Big Jaw Pokémon
Height;
6’1”
Weight;
137lbs
Pokédex Entry;
It opens its huge mouth to intimidate enemies. In battle, it runs using its thick and powerful hind legs to charge the foe with incredible speed.
Item;
None
History;
Hatched by a breeder of feraligatr, Rufus’ batch was destined for the pet market in the Sinnoh region. Never meeting his parents, the newborn totodile was whisked away from any possibility of a family to an illegally run store on the outskirts of Veilstone City. Rufus spent just over a week in the grubby cage alongside two of his siblings, the trio constantly fighting over food, sleeping area and time allocated in the small, stagnant excuse for a pool. Over these few days, Rufus was singled out as the weakest and soon grew determined to grow strong to achieve what he believed he deserved. When Rufus was finally taken from his enclosure, he was sold to a young couple living in the city, searching for nothing but a docile pet, a trophy creature.

User Note;
- Rufus has completely lost his sense of smell from living in the sewers.
- Rufus doesn’t know his own strength, having accidentally killed many in the past that he has tried to befriend. He doesn’t mean to hurt people; although, if they threaten to abandon him, he will make sure they never leave, even if he has to remove their legs to ensure it.
- The feraligatr never had an education and has never been around other pokémon long enough to develop any kind of social skills. Due to this, Rufus speaks in short sentences, often replying with a single word. He has the vocabulary of a toddler, despite being in equivalent of his early twenties.
-Adopted from Orphanage. Original profile belonged to Snitch (I miss you doll)