I suppose this is as good a spot as any. I, as a harbinger, like to practice on occasions, that I don't lose my spark. As these are all non-canon, I feel they belong here. Enjoy.
Cofagrigus

Joshua the Eevee, belonging to @DeadChaos 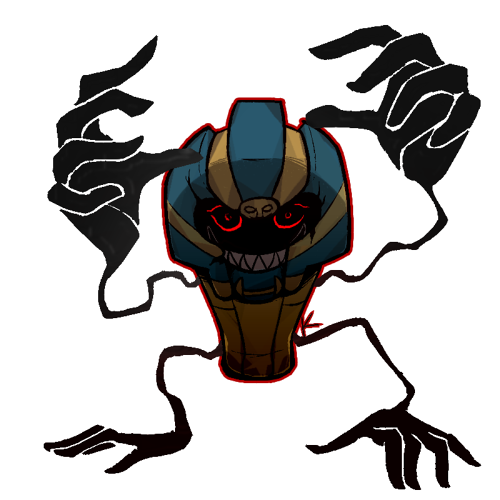 Desert, Southwest Orre
"So hungry... Cofa so hungry...' The words fell from the Harbinger as a funeral knell, each word seeming to carry the weight of the inevitable that was the speaker. Shadows shifted, Shadows melted and ran... should one look closely, a patch of inky blackness was spreading ever forward, the shadow among shadows a sable arrow. "So hungry... so long...' the words repeated, a steam of conciousness from a being long since devoid of thought. It had been months since this particular nightmare had fed, long seasons since the dessicated Volbeat had been disgorged, the husk drained of fluids, of minerals, of life. "Cofa... Cofa hunt... Cofa feed" The dreadful litany continued, words echoing across the sandy wasteland where the Harbinger found itself.

Dusty paws padded silently across the sand, ragged breathing lost to the howling winds of the desert. Running, he'd been running for what must of been hours, fleeing the group of "friends" he'd so eagerly left behind. Long gone was the inky darkness of The Under, behind him were the cramped tunnels... out here, out in the desert, it was him and him alone, nobody to turn on him, nobody to betray him, nobody to- "-fa hunt... Cofa feed"

The Eevee's scarred head whipped around, crimson eyes narrowing as they scanned the horizon. Nothing was here, nobody was here... Nothing in the starry sky, nothing in the desert sands... then why... where did the...-

The shadow slowed as it neared the mauve fox, the shrouded dart seeming to diffuse and melt with it's surroundings. "Cofa... Cofa feed" The words spoke again, a sibilant hiss from seeming to come from everywhere, from nowwhere. "Cofa have fun with you... Make scream, make fun..." The spectre seemed to coalesce, darkness concentrating in a penumbral stain under the poor creature. Up from the surface snapped the coffin, lid spread wide. Down swing that golden slab, a boom and a click the pronouncement, the judgement, and the sentence for the unfortunate meal it had sealed within. "Cofa catch you... Cofa play, cofa eat."

The very stars above seemed to pulse in sympathy, the same white light forming an ethereal orb before the ancient undead. The Harbinger rocked slowly, as if amused at the panicked thrashing from within itself, at the screamed litany of swears, of curses and threats. The summoned orb pulsed, the sands below itself shimmering a dull red in response. At a glance from the living morgue, that lustrous ball of heat melsed into the gilded surface, a tortured shriek being the response from within. "Cofa burn, Cofa cook~" The tomb hissed almost giddly, the hysterical pounding at his insides redoubling, a staccato rhythm of anguish, of terror and grim knowledge. The Fox had been preyed uppon, had been eaten, of course... it must have known the iron-clad truth of it's own doom, why did it struggle so? In a way, it was already dead; it was if the flesh hadn't accepted what the mind must have known.

Still, another orb of blistering heat grew and vanished into the now radiant surface of the Coffin, the metallic surface now glowing dull red with heat. The screams were tapering, were fading as lungs charred and dried, as the damned being inside boiled in the vessel of it's skin. The thrashing had abated as fur charred to ash, as conciousness slipped from the fox even as steam escaped it's corpse.