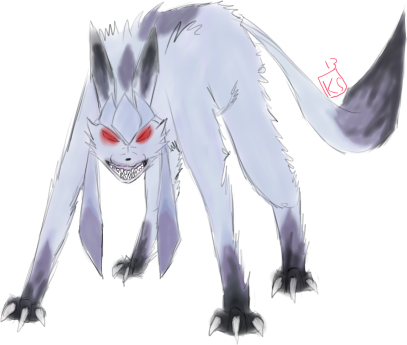 Pokédex Entry:
Pokemon Platinum:: By controlling its body heat, it can freeze the atmosphere around it to make a diamond-dust flurry.

If only you could see, the beast you made of me…

A love bite you said, a small token of affection shared between us but you knew it was just a way to drag me down with you, wasn’t it bitch?
You knew the moment you first got bitten how the disease could spread from you to me and so you forced me to fall with that one little bite.
I can remember your green eyes, the same golden color as the sunset, looking up at me as you did it too. I guess those bright blue eyes are as red as mine now.
I loved you…
At least I thought I loved you but you were cold.

I had a home where I was loved, friends who admired me, a duty to perform. You took that away from me with that one little bite. How long had I known you? Not long enough I realize now. After the humans left I was returned to my farm alone. No more childish games with Garth and Touverre and Laurre in Solaceon Square and I admitted to you that I missed the way they looked up to me whenever I won a game for them with my skills.
I was always too big for a little farm like this.
I was smarter than they were, I wanted to make something of my life and see the world!
You were there to sympathize with me and because you were someone new I was interested in you. I remember the warmth of your pink fur…

Isn’t strange that even though you’re the one that killed me I still miss you; the touch of your smooth green scales on my fur and the gleam of your bright pink eyes? But then you ran away from me, little minx, and left me alone with my dying body and oh, it took so long for me to die but you would have known that wouldn’t you? You would have known how cold dying is.
I thought of you when my heart stopped beating. I thought of you when I made my first kill and tore apart the plump body of a Miltank with my teeth. I thought of you when I first left my farm and killed the guardian of the next one.
I wonder what you taste like…

I killed my entire herd and crunched down their bones and it was delicious! The dumb animals didn’t even know enough to run properly.
You made me into a hunter and I am good at it now. I am superior to you and I will be the one to hunt you down. I will claw my way back into your heart and eat it.
It was me and the few I allowed to survive that killed this place. The disease may hurt my body and rot my brain but I am still smarter than any of you! I am superior and I will be strong enough to hunt you down and make you pay for what you’ve done to me!

I can remember that moment when I drove my best friend from his home. Poor little Garth, he had a crush on me did you know that? He made it so pitifully obvious. He ran away rather than fight me and the entire town was my territory.
I claimed a TM for myself, something my humans would never allow me, and I turned everywhere I went into my own personal frozen wasteland. There I waited and waited until my lips turned black and fell off but you would not return to the scene of your crime so I went to find you.
I am victorious and I am hunting you!
I am cold…
I am so very cold.
The ice, it follows wherever I go and turns everything into a wasteland. My wasteland...my kingdom and that is where I will bury you.
My body is cold and my heart is cold and hard and dead. Funny isn’t it, you’re always in my mind but I can’t even remember your face. Were you once an Eevee like me or am I just imagining it? It doesn’t really matter, I will find you...soon enough.

”Glaceon is a fox-like creature covered in light-blue fur, which can be frozen into sharp quills. It appears to be wearing a tuque on its head. Glaceon's inner ears, two spots on its back, tail end and cap-endings are all rhombus-shaped and darker blue, in contrast to the soft cyan main body color. Glaceon also has a similar shape on its back. Glaceon's feet are also a dark blue color, giving it the impression of wearing boots. Glaceon can use any attack that Eevee knows with the addition of Ice-type attacks. As a fully evolved Pokémon, Glaceon can learn Hyper Beam and Giga Impact. In addition to that, it can also freeze its fur to make it stand up like needles - similar to its evolutionary kin, Jolteon. By controlling its body heat, it can also freeze the atmosphere around it to make a diamond-dust flurry.”-Glaceon's Bulbapedia Entry

Carnassial is a large male Glaceon with a well-muscled bulky body. His normally light blue fur has become a lilac-tinted purple, his normally medium blue fur a virulent bright purple and the rest of his markings a blackened dead dark purple, almost black. His bright red eyes have small fixed pupils.
The infection has stopped the flow of blood to his extremities, resulting in necrosis of the flesh around his his paws, long ears and tail, leaving the skin blackened and numb. His nose has been badly affected and completely eaten away, leaving nothing but blackened edges around the exposed bone of his nose. His lips have completely rotted away, leaving his exposed grey gums that have also died and his sharp yellowing teeth. This flesh will fall off if struck with enough force and oozes an infectious fluid when pressure is applied.
He is violent in nature and his mouth is usually open in a bloodthirsty snarl. When he is about to attack he bristles his fur to sharp needles that resemble icicles. Often he is surrounded with a flurry of Hail that helps hide him and his tracks from view behind a layer of snow. He doesn’t know how to control it and often the Hail will start without him willing it. He constantly shivers with cold except when he is attacking when he no longer notices it. His exposure to the virus means most of him is completely numb to attacks as he will not notice damage to the majority of his body. His extremities are eventually turning black as his blood-flow is further inspired by the virus and rotting away as the tissue is damaged. This has resulted in the shortening of his tail and ears where parts have turned black and dropped off.

"The behaviors of Glaceon are currently unknown. As an Eevee, it chooses to live anywhere it wants. From there, it can evolve to its surroundings. In this case, an Eevee living in snowy mountains can evolve into a Glaceon.”-Glaceon's Bulbapedia Entry

Carnassial is constantly in search of the one who infected him, though the infection has spread to the point it is effecting the memory centers of his brain and he can no longer recall the name or appearance of the one who bit him, only her voice. He calls up a hail around him to freeze any environment into a frosty wasteland and hide his form. Believing himself to be superior to others despite his infection he views other living as nothing more than 'Meatbags' and occasionally states he is a Superior Predator and claims it is his eventual goal to transform all his 'territory' into a frosty waste. The Glaceon's infection has left him believing he is feeling the cold of his own ice instead of that of his dead body when using attacks. He often complains of being cold because of this as well as stating his heart has become cold as ice. He is confused as to what he'll do when he finally meets the ones that is infected him as his feelings of love and hate fluctuate.