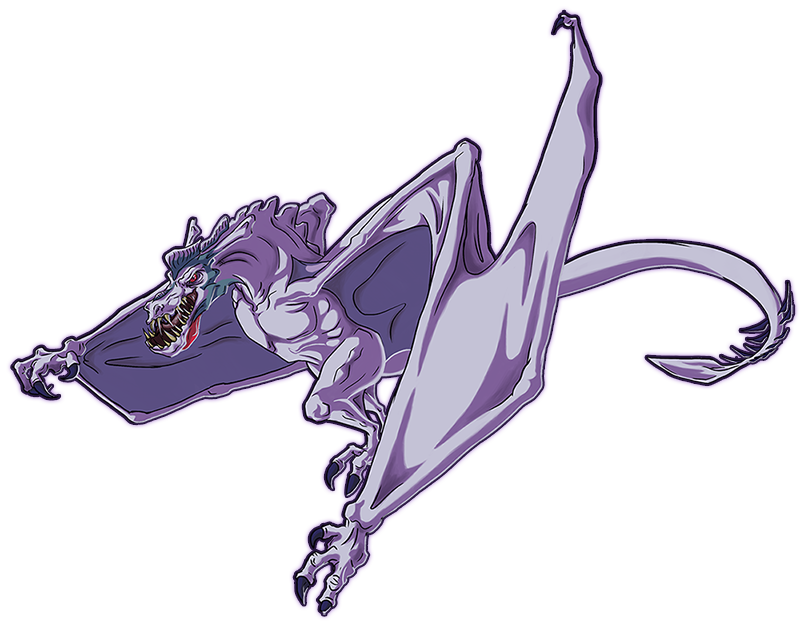 Arrow
Age
Adult
Level
49
Gender
Male
Moves
Crunch (Level up)
Sky Drop (Level up)
Wing attack (Starting move)
Thunder fang (Starting move)
Nature
Serious
Characteristics
Good Perseverance
Height
5'11"
Weight
130.1 lbs
Ability
Pressure
National dex number
#142 Aerodactyl the Fossil Pokemon
Pokedex Entry
Aerodactyl is a Pokémon from the age of dinosaurs. It was regenerated from genetic material extracted from amber. It is imagined to have been the king of the skies in ancient times. ORAS
Personality
A loyal Aerodactyl with a strong mind, he fled from a cruel trainer and since then lived in the wild. Became friends with a Charmeleon and a Charizard, he became a very close friend to them. He can tolerate humans but doesn't trust them to well.
Appearance
An average Aerodactyl in size and weight.
History
Arrow's story began years ago. After being revived from an old amber that a trainer found, Arrow woke up and the first thing he seen was a human scientist. He was scared and didn't know what to do. Then when he got put into a pokeball he was handed over to the trainer. Four years he had stuggled being put to use, but every battle was a loss. This caused the trainer to become abusive towards him. Arrow was constantly kept in his pokeball and only fed once a day. Eventually the next year the trainer pushed Arrow to far and the Aerodactyl had enough. Eventually, snatching the pokeball out of the trainer's hand before being put back in. With a squeeze of his jaw the Pokeball broke in half. Arrow fled from the trainer so that he could never endure the abuse he took again. As the years went by Arrow started living in the wild, avoiding human contact. Though, he didn't hate them, he just didn't trust them from the experience he had in the past.

One day the Aerodactyl was hunting for some food and his first prey was a rattata since they was the easier to catch. Eventually he worked his way up on the food chain to more satisfying meals. The Aerodactyl was out flying one day to feel the wind in his face. It felt good to him and when he landed, he felt happy. As years pass by, Arrow grew into a fine Aerodactyl. He had became victorious fight after fight while living in the wild. Then one day, he was flying around he came across a Charmeleon and a Charizard. This was the first time he seen two fire type pokemon. He flew in and landed near them, with the intent on finding out who they was.

The Aerodactyl started sharing his food he caught with the Charizard and Charmeleon, eventually gaining their friendship. Arrow started becoming close friends with them and decided to stay with the two after being alone for so long. As he asked them their names the Charmeleon was named Nawe and he was close to Arrow's age. The Charizard then told her name. Lagnei she went by and Arrow told them his name.
During one of his hunts he met a Azumarill who referred herself as Big Mama. Since then, Arrow had called her by that name on that day. Though not as close as he was to Nawe and Lagnei, he sometimes seeks her out for advice when he needs some. His hunting prowess was perfected, but he needed advice on humans. Only one he was to ask was Big Mama and she maybe the only one to answer that question.

Then everything changed in the coming years. Arrow was hunting for food and after catching a few descent meals for the three of them. Other pokemon started approaching the Aerodactyl. Their eyes was devoid of any life and a fierce red glow to them. Arrow immediately took off before they surrounded him. The Aerodactyl had never seen anything like this before and he went to check on Nawe and Lagnei. He dropped the food before reaching them. It was time to get out of their and head to safety.

Motivations
To protect Nawe and Lagnei from any harm.

Affiliations
Nawe the Charmeleon (close friend) Close to Arrow's age and possibly Arrow's best friend in the world.
Lagnei the Charizard (close friend) A mother Charizard and a friend of Arrow's.
Lemon the Azumarill (Friend) Much isn't known except he met her just before the outbreak began.
User notes
-Close friend of R'hia Kyrie's Nawe the Charmeleon.
-Doesn't trust humans, but can tolerate them.
-Will protect Nawe and his mother at all costs.