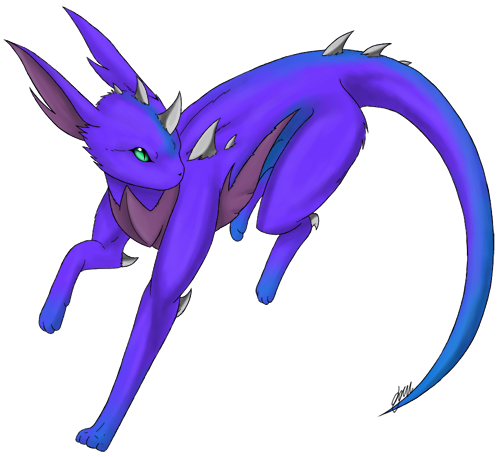 History;
Hatched by an Eevee breeding facility, Sunshine – as he was known then – was one of countless youngsters reared by the staff. A typical, curious kit, the youngster quickly became singled out for his identity as a runt, boasting a puny stature that had the humans worrying about his health. However, he was in good condition, simply renowned for being a pipsqueak – little more than a furry pebble. Of course, whilst the humans thought him utterly adorable, Sunshine quickly grew to resent his appearance. Fellow youngsters towered over him, teasing and tormenting the kit as he began to form a short, snappy temper. His mood continued to worsen over the months at the facility until he was sold to a coordinator enamoured with his cutesy appearance, destined for a future draped in ribbons.

Sunshine found that his life could indeed sink lower. Flung into the world of cute contests, the Eevee was soon forced to compete for a living and embrace his identity as an adorable puffball. A relatively macho boy as he entered his teenage years, Sunshine quickly began to hate life. Whilst he was successful in the business, earning his human various ribbons from across the regions, the canine was never free from torment. Competitors in other contest categories proceeded to rip the piss out of the disgruntled youth, their jibes only intensifying when he was named victorious – the king of cute. Sunshine struggled with a venomous temper, the daily torment – bitchy and light-hearted alike – eventually wearing down whatever restraint he had clung onto. After one particularly strenuous day, Sunshine snapped and bit one of the judges. Eliminated from the region’s contests, the Eevee’s happiness was short-lived as his infuriated human promptly sold him away.

Despite his joy at being free from the world of contests, Sunshine was soon introduced to a far more vigorous, violent way of life. Purchased by a renowned trainer of dragon-type pokémon, the Eevee was soon launched into an intensive training schedule. He was an appalling battler at first, hesitant and nervous of the opposition – but with time and a little persuasion, he slowly adapted to the world of fighting. Unable to escape the taunts of his teammates, all large, burly dragon-types highlighting his puny stature, Sunshine’s temper continued to flourish. But instead of bottling it away, the Eevee found the opportunity to vent in battle. He became famed for his aggression, often known to get carried away and beat his unconscious enemies to a bloody pulp. With such motivation, Sunshine grew strong quickly. Over time, he was shaped into a formidable, quick-footed opponent – changing his name to the more masculine, ‘Sonny’ to mark the start of his new life.

Always of small stature, Sonny quickly worked his way to top spot in the team of terrifying dragons. His violent temper was awe-inspiring, terrifying his colleagues into submission as the fluffy fox demanded a fearsome respect from his peers. It was the happiest he’d ever been; his battling finesse, new-found respect and a string of romances on the side indicating signs of the canine's upcoming evolution. Yet Sonny’s joy was short lived as he was soon abruptly knocked from his pedestal. His human, terrified the canine would evolve before he could introduce his plan, ordered his Salamance to give the Eevee a beating he wouldn’t forget. Although he put up a good fight, Sonny was eventually defeated, left seething and humiliated at his fall from grace. But always a fighter, the canine was back on his feet in no time.

Only a month after the attack, his human singled the canine out for especially intensive training. Sonny hated the man, struggled to trust him, but was soon enlightened to his intentions. Having researched the fabled dragon-type eeveelution, the man was determined to trigger Sonny’s transformation into a Drakeon. With the help of professors and researchers, he had discovered the method to such a legendary evolution and had begun to test these theories on Sonny. The Eevee was delighted at the opportunity to abandon his puny form in favour of a larger, more powerful stature and put everything into learning Dragon Bond. It took months, the work towards the achievement exhausting and time-consuming, but despite the odds, Sonny successfully learnt the move. Transforming into a Drakeon, the human was delighted at the canine’s evolution whilst the creature himself was left fuming. He was powerful, sexy, sleek but still… notoriously short.

Sonny spent the following years with the team struggling to accept the fact he was destined to stay forever short, taking solace only in a series of meaningless flings. The group defeated countless gym leaders, taking down the Eilte Four in two regions as they proved themselves a fearsome, near-unstoppable force. Sonny had become the pinnacle of the team for not only his dazzling appearance but a surprising strength born from his terrible anger. Despite everything, the fans who fawned over his species and the enemies who grovelled for mercy, Sonny always caught a jibe about his height somewhere in the background. Unable to rise above such taunts, the dragon-type turned his attention to harnessing more power, more respect, to silence those who continued to ridicule him.

Before he could achieve this goal, the epidemic hit. Sonny’s trainer attempted to flee with his team, boarding a ship in a bid to escape the disease-stricken region. But of course, the pokemon were turned away - released despite the man's screams of protest as he watched decades of hard word simply fade into the wilds. Sonny was over the moon. He was free of the human's dictatorship and soon separated from his team-mates too, confident he could survive and prosper without the excess baggage.

Appearance;
In terms of appearance, Sonny is almost completely normal. He shares the same, vivid purple coloration of his species and a typical frame, swayed towards the more athletic side. However, his distinguishing feature is unsurprisingly his height. He’s absolutely tiny for his kind, his miniature stature providing the bane of his existence. His namesake comes from his surprisingly soft, yellow eyes.


User Note;
- Shockingly, Sonny is an original character, lol. However his attitude and behaviours were inspired by the psychological concept of the Napoleon Complex / Short-Man Syndrome.