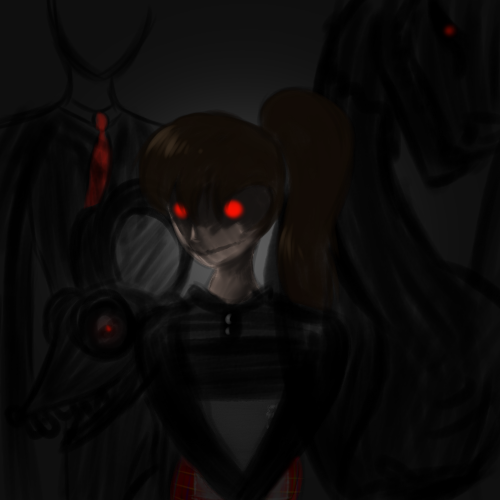 Fairy tales, Campfire Stories, Urban Legends, Creepy Pastas and original works of EJ members themselves (Including myself). Little Birdie here loves a good scary story or myth, so if you could possibly recount some of your favorites I'd be delighted. Links to stories on other websites are good too, thanks in advance! Anyone is fine to post on here, I'll probably put a little work or two on here as well~

Scary Stories to tell in the Dark (And other miscellaneous nonsense)

Here's an old classic I remember from when I was a kid, Called the Babysitter and the man upstairs. This version is from urbanlegends.about.com. Enjoy!

A married couple were going out for the evening and called in a teenage babysitter to take care of their three children. When she arrived they told her they probably wouldn't be back until late, and that the kids were already asleep so she needn't disturb them.

The babysitter starts doing her homework while awaiting a call from her boyfriend. After awhile the phone rings. She answers it, but hears no one on the other end — just silence, then whoever it is hangs up. After a few more minutes the phone rings again. She answers, and this time there's a man on the line who says, in a chilling voice, "Have you checked the children?"

At first she thinks it might have been the father calling to check up and he got interrupted, so she decides to ignore it. She goes back to her homework, then the phone rings again. "Have you checked the children?" says the creepy voice on the other end.

"Mr. Murphy?" she asks, but the caller hangs up again.

She decides to phone the restaurant where the parents said they'd be dining, but when she asks for Mr. Murphy she is told that he and his wife had left the restaurant 45 minutes earlier. So she calls the police and reports that a stranger has been calling her and hanging up. "Has he threatened you?" the dispatcher asks. No, she says. "Well, there's nothing we can really do about it. You could try reporting the prank caller to the phone company."

A few minutes go by and she gets another call. "Why haven't you checked the children?" the voice says.

"Have you seen him?" the dispatcher asks. She says no. "Well, there isn't much we can do about it," the dispatcher says. The babysitter goes into panic mode and pleads with him to help her. "Now, now, it'll be okay," he says. "Give me your number and street address, and if you can keep this guy on the phone for at least a minute we'll try to trace the call. What was your name again?"

"Okay, Linda, if he calls back we'll do our best to trace the call, but just keep calm. Can you do that for me?"

"Yes," she says, and hangs up. She decides to turn the lights down so she can see if anyone's outside, and that's when she gets another call.

"It's me," the familiar voice says. "Why did you turn the lights down?"

"Can you see me?" she asks, panicking.

"Yes," he says after a long pause.

"Look, you've scared me," she says. "I'm shaking. Are you happy? Is that what you wanted?"

"Then what do you want?" she asks.

Another long pause. "Your blood. All over me." What The fuck Man?!? Don't tell me this is what actually turns guys on.

She slams the phone down, terrified. Almost immediately it rings again. "Leave me alone!" she screams, but it's the dispatcher calling back. His voice is urgent.

"Linda, we've traced that call. It's coming from another room inside the house. Get out of there! Now!!!" Saw that one coming, should have ran while she could

She tears to the front door, attempting to unlock it and dash outside, only to find the chain at the top still latched. In the time it takes her to unhook it she sees a door open at the top of the stairs. Light streams from the children's bedroom, revealing the profile of a man standing just inside.

She finally gets the door open and bursts outside, only to find a cop standing on the doorstep with his gun drawn. At this point she's safe, of course, but when they capture the intruder and drag him downstairs in handcuffs, she sees he is covered in blood. Come to find out, all three children have all been murdered. Dun-Dun-DUN.


Okay, that one was kinda weak, but that's the whole reason I set up this little shindig! Now let's see what you guys got.
Moon Moon

Not exactly a scary story, but it's pretty weird. So here's a poem I had to write for school today, critiques possibly?

Alone, I wander in the desert
Searching, for my thoughts as I sift
Despite my best efforts searching shows nothing.
My wit is starting to run dry.
For hundreds of years my mind's been seeking
Oh, Alas what should that be I'm seeing?
Ah, Could it be? A golden ring of flies?
I will never know, if I don't get close~

Oh what would that be? Ah, now I'm intrigued.
If you shouldn't mind, please get out of sight?
Things are kinda getting confusing,
You find me suffering from a blight.
I regret what I've been choosing.

Who, what now? Do you want to make me frown?
Ah, But what fun would there be, wondering
About everything yonder glimering
But then as I look down, my head alights
And engages in an internal fight.

Running desperately through the sand
Necrosis, Psychosis, not soon to settle.
Now I'm getting mad.
Lifting up my skull, I pull a strange thing.
Cloaked in a sheet of metal,
Getting tired I raise it to the sky.
I will never let myself die.

When will those two leave me alone?
Struggling to take a breath, it's my sunset.
Now, It's very important that you forget.
Not everything's set in stone.
Moon Moon

I just read a creepy pasta, and I must say it's of the best Creepypastas I've ever seen. It's a biggie one for Godzilla and if you got a hankerin' for the pasta, here's a good one to get your fix! http://creepypasta.wikia.com/wiki/NES_Godzilla_Creepypasta
Moon Moon

Yes, I write Fanfiction. About Pokemon. And Danny Phantom
Duma

x3 you should add mine in there, it's finished
Moon Moon

Any idea for any other good creepypastas? I've been itching for another good one after I read and re-read(About ten times) that NES Godzilla one.
Moon Moon

I got one~
This one keeps me up at night.
Moon Moon

Oh, Oh! I forgot to put this here, enjoy!:
For all those Slenderman Fangirls
Moon Moon

POETRY DUMP FOR THE WIN:
Forgotten on Mars
Forgive me not, Forget me not
On this icy planet red.
Where the winds whisper of a land now dead,
A fate my own being left to rot.
Just to protect the head grown heavy,
With the weight of the crown.

Why couldn't I have gone to the moon?
Just as my mother said.
Death now, it comes too soon
I am surely dead.

Hush, even the wind is silent,
Something has choked their desperate howls.
Something dark and violent,
behind me now I hear it's growl.

Fanciful Nights
A serene silence reigns in a man's sleep
Tomorrow's wind caresses the minds' moor
He realizes this is no time to count sheep,
And winces as light pours from behind the closed door.

We shall weep not for a forgotten dream
As few recall the peace of the deep
While none forget the sight of those claws' gleam
For some, it makes them fear going to sleep.

Little Black Rock
I found a little black rock.
It was smooth and shiny, like an egg
pretty, but smelled like old gym socks.
It reminded me of the powderkeg
That lay in the shed, the one my dad forgot.

The day was hot, my parents had fought
Over who would do the laundry.
Eventually they came to the conclusion that,
of course, it would be me.

I had managed to sneak out during their grumblings
and walked outside of our grimy building.
It was small to be true,
old and rotten, smelling of mildew.
But it was ours, that made it worth it
Even if my mother insists we'd be better off if we sold it.

I was strolling around, then I smelled smoke and started to panic
If he knew I let it blew,
I'd lose my head. So I looked around, Manic.
For anything that would lead the flames away.

I searched and scribbled, and found nothing.
And, turned gasping in horror, what is this.
It should not have this power, did father leave his guns down cellar
Oh this is not the most fortunate hour.
My hopes, my dreams exploding,
I didn't even have to time to scream, as the flames came engulfing.
Moon Moon

Oh, and word of advice. If you actually believe in what he's saying, don't finish the video. Don't.
Moon Moon

Here's one for the corporate giant we've all dealt with at some point or the other...
McDonalds
EDIT: Since this one was so short, I'll give you a few more.
We don't talk about Sarah.
The Smiling Girl
Moon Moon

I have a rather interesting story for you to enjoy tonight...I hope you like it.
http://someordinarygamers.wikia.com/wiki/Tristan

*Disappears back into the shadows*
Duma

Now we may proceed with the creepypastas.
Duma

Here's a Pokemon one.
[url]http://someordinarygamers.wikia.com/wiki/I_Won't_Leave_You[/url]
Duma

That one was really good
Duma

I found a cool one for you~

Yessss, Creeps has the best voice doesn't he? The vocaloid is strong with this creepypasta, the writer did a good job.
Sponsored content