Pokédex Entry-   It has eyes which can see through anything. It spots and captures prey hiding behind objects.-Diamond
Level-   42
Ability- Rivalry
Nature-   Lonely
Characteristic-  Highly Curious
Moves-
- Tackle (Level Up)
- Charge (Level Up)
- Spark (Level Up)
- Thunder Fang (Level Up)

History:
Eyes opening, a small Shinx saw it's parents for the first time, imprinting them as it's parents. A connection formed instantly, but at the same time, the small Shinx felt something wrong. Over the next week, the small Shinx was named Darren by it's parents, Subject X708 by the scary people. During that week, the Shinx learned small things from it's parents, and it saw that they looked different to the others around it.
A few weeks later, the small Shinx, Darren, learned more and more, and understood why his parents looked so strange, they had been barely fed, all of the Pokémon in this place looked hungry, but his parents seemed worse than others. He learned tat this was because they were being fed the same amount as everyone else, but his father was not eating, instead giving his food to Darren's mother, and when she ate, Darren suckled from her, taking the food that she ate into him. Once he was old enough to eat food two scary monsters all in white took his parents. Darren called for them, but they had no energy to fight, and the scary men put something into them, something which killed them. They were returned to the cage, and Darren was given no food at all. After a few days without food, he couldn't survive without eating, and so he was forced to eat his parents. He couldn't handle the hunger, and he was constantly weak ad dizzy. A yuck smell had begun to come from his parents, and they hadn't moved in the days since they had been injected. He was left there with nothing but his parents to eat for almost two weeks, till he had eaten his father and most of his mother. By this point, they were beginning to rot, and so, the crazed Shinx was moved from the isolated cage, into a cage in a long row of cages, in a room filled with hundreds of cages. A big room. A giant room.


Over the next few years, he was tortured. Many needles like the one that killed his parents were stuck into him, but he still survived through all of the experiments. Many things were put on him, usually make up. Some experiments also included his healing time, how long it took him to heal a wound. As part of this, in a long running experiment, his tail was cut off halfway down it, to see if it would grow back during evolution. Over time, however, this experiment was deemed a failure, as no Pokémon were able to regrow limbs via evolution. He also had cuts inflicted on him, most not very major, but some were deeper. Most were under his fur, which turned to scars but his fur covered them over, however, some were on more obvious areas. One on each of his legs, deep scars, which never healed very well.

Over another few years, when Darren was approximately 10, a cage with a Piplup who was 11 was put next to him. Darren had been subjected to cruelty over the years, and only knew cruelty, and so he struggled to make friend with the Piplup. The young Piplup-Dean-only showed him kindness, even when Darren was mean. Over the next year, they had become close friends, and Darren always helped Dean overcome pain, and cruelty, so Dean did not become as harsh and mean as Darren had once been, however, the years of torture still got to him, and so he was still somewhat cruel, and mean.

When Darren evolved at thirteen, Dean was close behind, evolving into a Prinplup at 14, just three weeks apart. Darren slowly  began to gather a crush on Dean, However, when he was sixteen, and Dean was seventeen, Darren admitted his true feelings to Dean, but while he said it quietly, so no one else could hear, and he told Dean about his sexuality, Dean, horrified, backed away to the edge of his cage, as far from Darren as his cage would allow. He became disgusted at Darren, and began calling him cruel names, like fag, and queer. Others heard him, as they saw the unusual behaviour. Dean was always far away from Darren, while no matter what Darren said, Dean would only reply with shut up, and call him an insulting name. Everyone began talking about this, and soon it was known about Darren. Darren felt betrayed by Dean, but Dean was unable to control himself, due to the cruelty he suffered. Everyone there was as cruel as the other, the least cruel of all was Darren, and that was because of Deans kindness while Darren was mean to him. He thought that Dean was like him, kind, not mean, but he was wrong.

5 years later, something horrible happened. The monsters dressed in white, which Darren had been taught were humans, began screaming, as Pokémon killed them mercilessly. Darren felt his hopes of freedom build greatly, as he thought that someone was saving them, however, his hopes were shattered, when, while the Pokémon accidentally broke some Pokémon free, they killed many of them. When some stepped into the light of where Darren was, he saw that they had rotting flesh, red eyes, and were monstrous forms of their old beings. They were like dead Pokémon still moving. Darren and Dean were two of the few Pokémon who were accidentally freed and who survived the creatures, rather than being slaughtered while running to freedom.

As they escaped, Darren ran alongside Dean, but when some undead cornered Darren, he called to Dean to save him, to help him, but Dean looked at him in disgust, and the ran away. Darren was able to kill those cornering him, barely, and made his way outside, where he saw Dean, surrounded much like Darren had been. Dean called to Darren for help, but Darren, unlike Dean, tried to save him. He was not able to kill them fast enough, and by the time Darren had managed to kill some, others had circled in and there was too many for Darren to focus on, even with Deans help. Dean was bitten, torn, and killed, but not before he called to Darren that he was sorry, and that he too, loved him, he just wasn't able to accept his feelings. Darren went into an outrage as he heard the Pokémon he had loved tell him he loved him back, and saw his love be killed right in front of him. He killed another two, before he evolved into a Luxray, and let off a powerful Thunder Fang, and killed several more. He managed to escape, and has been wandering aimlessly for two years since then.

Appearance-  He looks like an ordinary Luxray except for his missing tail, due to him being tortured as a young Shinx. He also has two scars on his legs, two on each one, near the bottom. These are also from him being experimented on.

Personality-   He is very predatory, but he is also more violent than most Luxray are, due to having been tortured and experimented on while young. This has led to him being very distrustful and cruel, believing that the world is cruel and you have to be just as cruel, or more, to survive as that was how he survived.
He is gay, and struggles to express his feelings for anyone however, as he struggles to get close to anyone, due to his cruelty and distrustfulness. This is due to him being teased about him being gay as a Luxio. While being openly gay, he does not flaunt it around, due to him being teased as a Luxio, he is shy about it.

User Notes-
-He is openly gay
-Theme song Same Love
-He is often cruel
-He is shy about his sexuality, but does not deny it
-He struggles to connect to people because of his lost love
-He feels like he will never find love, and never wants to
-He struggles to express emotions
-Amazing image thanks to KatiaDWolf

....a gay Luxray. This will be a interesting character.
Zapdos

There are quite a few homosexuals in the RP. lol Like the Absol on Pyrite
Mewtwo

seems many interesting things with this Luxray lol
Guest

lol, I didn't realize there were any, I knew about the milotic, but then he was changed to a she, and so I thought that it would be something different lol, I didn't realize there were many, and I wasn't sure how I am going to RP for it, so I will probably need to check out some of their posts/ profiles, so I can get an idea of what I would change/do differently for him then with my other characters.
Guest

Working on his history now, getting there.
Guest

Now I just need to get a Profile pic
Kaze

I'll do it!
Guest

Thank you, but I have Katia doing one for me, however, I will get one from you next time if I may.
Kaze 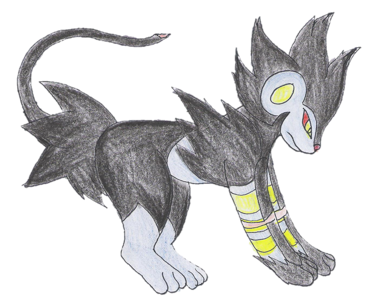 Ready to go be approved!

You're joining a team with a character on it named Dean...Hope your Luxray takes it well, lol.

thanks, and lol, didn't even realize.
Guest

Could Darren please also be reactivated as well.
Mewtwo