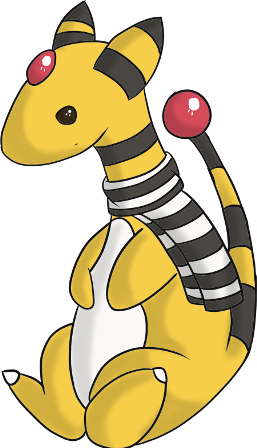 History - Dave was an accident. His mom had cheated on his dad with a Bayleef, and the father found out. The abuse was torture until she finally left him. He stormed off, never to be seen again. Just as the father was gone, the egg hatched, and out came a healthy Mareep. But he was alone.

The Mareep was born outside of Canalave City. He silently watched the townspeople go about their daily lives. One day, a toddler got lost in town and stumbled upon the Mareep. Dave protected the toddler until she was reunited with her parents. But Dave ran away from the parents out of fear.

The child, whose revealed to be named Kelly, kept coming back to the town everyday, hoping to find the pokemon that kept her safe that one day. As she grew up, so did Dave, eventually evolving into Flaffy, and then an Ampharos. By this time, Kelly was a teenager, but she still kept coming to Canalave.

One night, she was out alone, Dave watching her in hiding, when she was attacked by a mugger. She handed him the purse, but the mugger wanted Kelly. As the mugger attacked her, Dave came out of hiding to attack him and protect Kelly. When the mugger went down, the two made eye contact, and Kelly knew that Dave was the one who kept her safe. As a 'thank you' present, she gave him her black scarf, and taught him the TM for Charge Beam. When the sun rose, Kelly hugged Dave goodbye and left Canalave City for good, satisfied that she met her protector.

When the infection hit, Dave left the town to search for Kelly. He explored the whole region, but couldn't find any trace of her. Thinking that she returned to the city for his protection, he returned to Canalave to find it empty and in ruins. On his way, he was attacked by a Kadabra, and was teleported all the way to Gateon Port in Orre. He now works to get back to Canalave.


Appearance - Dave is mostly a normal Ampharos, except for the fact that he wears a scarf.

Personality - Dave doesn't like to be a leader, he prefers to be a follower. His quiet lifestyle taught him to go with the flow. He only attacks when his friends are in mortal danger.

User Notes:
-History based loosely off of Boo Radley from 'To Kill a Mockingbird'

I would like him to be placed in inactive until Gateon Team is made.
Guest

Dave is ready for approval.
Mewtwo