Carrie the Froslass and Elliott the Absol (Orre, Relic)

Carrie the Froslass and Elliott the Absol (Orre, Relic) 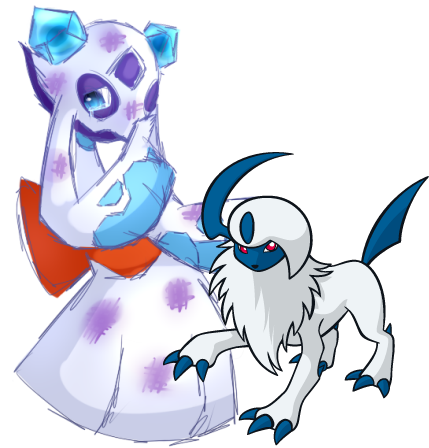 Carrie had lived a terrible life. She was born to a breeder who took good care of her for a short while. She was purchased by someone, so she and the breeder were forced to part. Business was business after all...

The trainer, Margaret, was a nasty woman. She was a coordinator who was infamous for fighting with the judges and getting disqualified from contests for doing so. She raised Carrie in a harsh manner, and evolved her into a Froslass despite the protests. She would also beat Carrie whenever she lost a contest, even if it wasn't Carrie's fault. Over time, she developed rivalries with other coordinators, often resulting in fights. Security would be called, and Margaret would be thrown out of the contests.

Some time later, Margaret was called in to do a special contest. She brought Carrie along to participate in it. One of her long time rivals, Susan, however, was also participating in it. Susan had bribed the judges to rig the results so that Margaret and Carrie would win the contest, just so she could pull off her plan to humiliate her. The stage was set and at the end of the contest, the judges declared Margaret and Carrie to be the winners. The duo felt so happy. It felt like all the shit Carrie put up didn't even matter, because she knew that if Margaret is happy, the beatings would stop. Their happiness was cut short, however.

A wave of red came down and drenched the two. It was Grumpig's blood that soaked them from head to toe. The judges then announced that Susan and her Milotic were the real winners. Susan's plan for humiliation worked. Margaret was enraged at everyone laughing at her. She took her anger out on none other than Carrie. The Froslass cried out in agony at the pain dealt to her. She soon decided, however, that enough was enough.

To prepare for the contest, Margaret taught Carrie the TM for Psychic. The coordinator hoped that she could combine it with Double Team and Ice Shard for an amazing appeal. They practiced day and night perfecting it, but Carrie soon got it down. Nobody in the room would have ever thought that she would use it in another way... to kill. She broke off into several copies with Double Team and sent shards of ice everywhere via Ice Shard. The copies merged into the real Carrie as she controlled them with Psychic, driving them into the audience. This continued until she got her revenge, by killing everyone in the room.

When she snapped back to her normal self, she couldn't believe what she had become. She stayed in Slateport for a short while, staying up until the infection entered the area. She left due to the memories haunting her, eventually making her way to the Orre region. She now hopes to get rid of every last memory of the contest.

Appearance: Carrie's body is covered in bruises due to her abuse.

Personality: Carrie is fragile. She is shy around strangers unless they show kindness to her. When she does become friends with someone, she is shown to be very kind and caring about her friends.

History: Elliott lived on the streets of Hoenn for part of his life. He always tried to steal food from restaurants and was always on the run whenever he got caught. Because of his living conditions, he was dirty and all grimy. One night, he followed a man to his home. The man, named Oscar, lived in a small house outside of Lavaridge Town, and invited the Absol to stay with him. Elliott took advantage of his offer of kindness and thought of it as free food and shelter.

Oscar raised the Absol for contests instead of battles, teaching him Aerial Ace and Shadow Claw TM's for those contests.. He said that he preferred contests because battles were "barbaric" in his words and contests "showed a Pokemon's true beauty". Elliott, however, preferred battle instead of contests, but did it anyway to make his trainer happy.

Oscar and Elliott showed to be an unstoppable duo. However, Oscar got into a few fights with a coordinator named Margaret. The fights would easily escalate into a big scene and they would be removed from the competition. Though Oscar and Margaret were bitter rivals, Elliott and Margaret's main pokemon, her Froslass named Carrie, never spoke to one another.

Oscar and Elliott went to Orre on vacation, taking a break from the contests. While they were there, they heard on the news that in Slateport City, there a mass killing in the contest hall, and Margaret was one of the victims of it. It was also said to have been caused by a Froslass. Oscar wasn't surprised that it was Margaret's Froslass that did it, and neither was Elliott.

The infection quickly entered the Orre region and Oscar and Elliott were hit hard. In the chaos of everyone trying to get out of the region, the two got separated with the Absol thinking he was left behind on purpose. He now roams through the region on his own, and hopes to find a place with shelter and food.

Personality: Elliott has a tendency to be smug most of the time. However, he will be nice if there are any females around. He also holds a personal vendetta against humans due to him being "abandoned by his trainer"

User Notes:
-Will become a dual with Carrie on Relic.

Note: Carrie was approved before the profile update. What I put as her history is an extended and better written version of her old history. However, I feel like she is a bit overpowered, so I'm not sure if I should remove the incident from her history or not.
Guest

Carrie and Elliott are ready to be moved out of WIP and checked for approval.
Mewtwo

Due to her being still active during the profile changes her level and moves stand just fine.