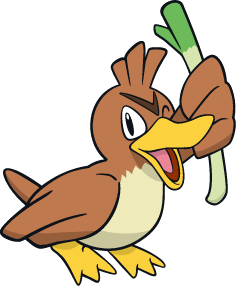 Dex Entry: It can't live without the stalk it holds. That's why it defends the stalk from attackers with its life

History:
Life for this little duck was always odd, as was the duck himself. Never being around his own kind and raised by a nice lady out in the middle of Arceus-knows-where. The little duck only knew the desire to have a Stick. When his owner finally let him get one, the young duck was content. Then, he decided to learn. His owner read to him every night before he went to bed, showing him the pictures and letting him see all the letters. Connect the dots. It wasn't long before the Farfetch'd could read the words himself. He was a smart duck, but he was awkward when his Owner decided to put him in Day Care. He often avoided others and stayed in one corner of the room, playing by himself whilst others played outside. His Owner, along with the Day-Care Couple, knew it wasn't mere shyness, as he did the same thing every day. He went to the corner, grabbing a few toys as he went, hugged the Day-Care Lady and Squawked out what they interpreted to be a "hello!" in Pokespeak, and then sat there all day, only leaving to use the facilities or to eat.

His Owner, fearing what was happening, took him to a examination. The Doctor had a Chansey ask questions, since the Chansey could write down the results since she could actually understand the duck. The Chansey asked him a series of questions to discern what indeed was wrong with him, if anything. At the end of the test, the Chansey wrote down the results, informing the Doctor that the Farfetch'd had simultaneous ADHD and Aspergers, a form of Autism. These in conjuction made the Farfetch'd awkward around others, but simultaneously it gave him a desire to make friends. This caused the Farfetch'd to be a loner, to uncomfortable to try to make friends. As he grew older others began to try and make friends with him. A little Tyrogue by name of Kaden befriended the Farfetch'd and they played every day they could, sometimes going to the other's home to stay the night and play more. The grew up, and Kaden moved away. TBC's owner decide it was time for him to get out and battle, and so he gave TBC away to her son. Her son was the one who named him, since the Farfetch'd seemed to act like a Honchkrow. Since he made friends, TBC had become very outgoing and friendly, losing much of his awkwardness and growing to the point of being able to make friends with anyone he talked to. So, since TBC was now so charismatic, and was able to make others listen to him, to an extent mind you, the boy named him The Big Cheese, or TBC, which refers to the '30s term for "Head Honcho."

TBC took to his name nicely, and pretended to order his trainer about by jabbing him playfully in the back to make him move. Since the duck would fly on top of his head and whack him if he attempted to stop him, the Trainer would just laugh and pretend to chase his Farfetch'd. It was fun. Other trainers mocked them...

"Farfetch'd are useless! Get a good Pokemon and lose the duck!"

They ignored the snide remarks. They would show them they were not to be trifled with. TBC, being highly intelligent due to Aspergers, was able to retain almost any information given to him. Including human knowledge. As stated, he could read, and given how dextrous Farfetch'd wings are, he was able to write by using a pencil with the same manner of grace and style as he did with a stick. As he matured and grew ever older, his knowledge grew. He began reading at a higher level than even his trainer, and it amused the trainer to see the little duck reading while the boy read simpler books. TBC began using his enhanced vocabulary, derived from his reading, to start better influencing others. Of course, other members of his trainer's team were less intelligent than him, and so he was able to boss them about, much like a Honchkrow does Murkrow, with ease. Nobody objected. Though he could read there were of course some setbacks. Being a Farfetch'd and not a Lucario or another naturally intelligent Pokemon, no matter how hard he tried he could not read higher than a 6th grade level. This, accompanied with his own weakness, infuriated the duck to no end.

He didn't do it to be cruel, bossing around the others, and in fact it was easier, since the intelligent duck usually knew what they should be doing and it saved the Trainer from having to explain it himself. TBC eventually learned the dance and style that had to be learned to properly battle. Though he was not good at it, he could strategize exceedingly well. Because he could write, it was easy to get his thoughts across on how best to win to his trainer, who was surprised to be getting advice from his Farfetch'd. Unfortunately, all his knowledge made the duck arrogant and vain. He thought himself too smart for battling, and instead devoted his time to mastering the literary arts, Reading whenever he could, he amassed more knowledge. His quest was halted by another member of his Trainer's team. Jack... the Vulpix fought TBC often. He won almost every time too. It intrigued TBC to be bested by somebody. Jack was smart, if not smarter than the duck, and so he began to pit himself against this new friend. Challenging him in both wit, intellect, and prowess in battle. It was fruitless in battle, but he enjoyed it nonetheless.

Then, like a Tidal Wave, the Epidemic struck, washing away his hope for a normal life again, though he's certain somebody may need help. The ever-intelligent Farfetch'd is there to lend a wing, and a brain to those attempting to survive.

Appearance: Almost always smirking, likes to slouch and to wave his Stick about imperiously. Often attempts to stand as though he's a Honchkrow and uses his wing to gesture to others.

Personality: Very arrogant, doesn't like being told when he's wrong, and will argue about everything if he believes he knows the answer. Doesn't enjoy being told what to do, and will refuse to follow orders, even if they are the smartest options, if he doesn't agree with it. Will run away before fighting, and is cowardly in many respects. Very much a wimp. More of a intellectual. Prefers to use brains and discuss things before fighting. Will read if there's something to read and write in the unlikely occurence he has a pencil and clean paper. Hate filth, and strives to be clean. His version of clean ond others differ greatly, and as long as there's no dirt upon him, he doesn't care how bad he smells. Will order others around if he knows what to do, and he does this in a calm, and usually polite way. Whacks others on the head when irritated, even if they didn't irritate him.

User Notes:
-Based off of yours truly.
-This is my Pokesona, a Farfetch'd.
-Learned to read through being read to and learning what letters made what sounds and went on from there to read.
-Was able to read by the age of three (LIKE ME)
-Has a secret desire to meet Uxie and see who's smarter (arrogance is bliss for me and him)
-Father was a Leafeon

Yay He's been placed in the ACTIVE section!

Please clean up your image, there are a number of white artifacts surrounding the picture. If you need to ask for a clean up in the Artist Alley.

Despite your best efforts, I do not believe this character should be able to read at the advanced level you claim. Despite any for of Autism it is still just a Farfetch'd, and not known for being a highly intelligent Pokemon. Due to the nature of his mental capacity, of which Aspergers focuses on patterns and memorization, I will concede that he could learn to read but never more advanced than say a 4th or 5th grade reading level.

Edited.... I hope that 6th grade is okay... since I considered him to be able to read at least most things, but not everything.
Mewtwo

I can accept it.