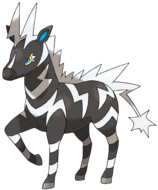 History: One of the Five Hoenn Harbingers. Her kind is known for violent tempers, and she is no exception. Her speed was legendary, and she held the lead mare position in a wild herd until being captured. The experiments made her anger level increase to the point of uncontrollable, and when she was released a great deal of the massacre was her doing. She now roams the region of Hoenn looking for an outlet for her violent nature, and any Pokemon will do.