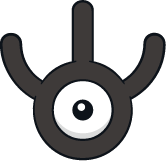 Name: W
Text
Gender: Genderless
Age: Geriatric?
Species: #201, Unown
Height: 1'08"
Weight: 11.0lbs
Entry: Shaped like ancient writing, it is a huge mystery whether language or UNOWN came first.
Level: 20
Ability: Levitate
Nature: Mild
Characteristic: Often lost in thought
Moves: Hidden Power
History:
W was just one of many Unown who inhabited the Ruins of Alph. W, like the others, lived peacefully, though repelling intruders who entered the ruins, though individually a weak force. Trainers sometimes came into the ruins catching the unown, for collection purposes. One time a trainer came set to catch all the different unown and, despite their best efforts, he managed to catch one of every type, naming each based on their symbol. He never used them however, putting them in permanent PC storage.
Years went by until the epidemic came. W's trainer's focus was then on survival. Training his strong he decided to release pokemone deemed too weak to be useful, obviously the unown were the first candidates. Upon they're release they became very excited to be out of there. Instead of returning to the ruins, most of the Unown went to explore, despite being unprepared for the world, let alone the epidemic.
Appearance: Basic W unown
Personality: Has a mostly tourist mindset, due to being in the PC so long.
User Notes: Unfamiliar with most kinds of pokemon, as he lived life only in the ruins and the PC.

You have left out the required 'Appearance' section. It should go right above Personality.

Aright, that's been put in, (wasn't sure it was needed for a basic appearance.)
Mewtwo

Yes, even if there is nothing unusual it is a standard part of the profile.