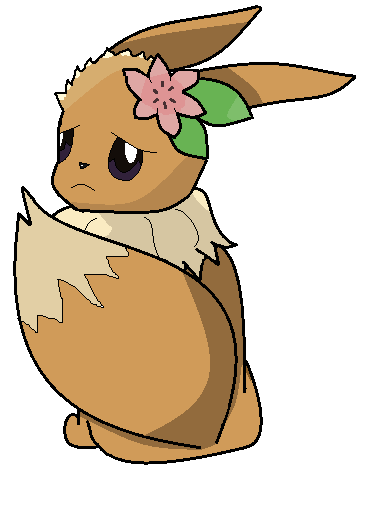 Pokédex Entry- Because its genetic makeup is irregular, it quickly changes its form due to a variety of causes.

Item- A Gracidea made of cloth, and a heart made of some scrap metal.

History-
Shaina was hatched by the girl who was to become her trainer's mother. She was playfull and happy from the day she had hatched. When she meet her trainer for the first time, a girl called Diana, she was shy. But Diana quickly got her respect, and they became friends by playing together in their backyard.

They where about to start they're joyrney, when Diana got into an accident. A Scyther had gotten red paint on it's eyes, making it go crasy, and ended up cutting one of Diana's legs off. This of cause meant that her and Shaina couldt not go on they're journey. Instead, they stayed at home. Diana then gave both the Gracisea and the small heart to her Eevee. But although she couldn't go out on a journey, she couldt still train her Eevee and her newly caught Pidgeotto.

It was under one of they're many training times, that the epidemic came over them. The flock of Murkrow's came over their town like a wave, and Shaina and Diana was in the middle of it. Shaina was at that time flying on the back of the Pidgeotto, and said bird got scared of the flock of other greasy birds comming over him, so it fled. Shaina had no other option that holding on to it's back.

Somewhere over the Johto region, the bird finaly collapsed mid air, sending them both going strainght down in the middle of a pack of undeads. But Shaina thought quickly, and dug her way underground. Then she waited untill she couldt no longer hear the ripping of flesh, and then came up. She then walked off, trying to find someone else who was still alive.

Personality-
She's pretty much a kid. She loves playing arround exept for when there is clearly danger in the air. She's normaly a very quiet girl, and if something big is comming, she's normaly the first to flee.

User Note-
- Sometimes act tough when no dangers arround, but usually wants protection if anything happens.

Ready to get approved!
Mewtwo