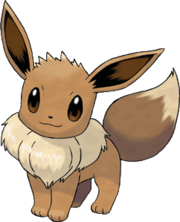 Pokédex Entry:
Its irregularly configured DNA is affected by its surroundings. It evolves if its environment changes.

History:
In the dark Ilex Forest, a litter of Eevees was born to a Jolteon and a Leafeon. During the freezing winter night, four of them died if cold, leaving only two Eevees alive. The next day, a Noctowl snatched up the fifth Eevee, leaving only the Eevee that would be Derek alive. The mother Leafeon was in terrible grief and refused to leave her last son alone; therefore, the father Jolteon hunted alone in the forest. Seeing as it was in the middle of winter, prey was scarce, and most of the time the Jolteon would go without nothing for several days. This severely weakened him, and before winter could relax its deadly grip, the Jolteon had been killed by a Fearow. After this, the Leafeon vanished from the forest, leaving her son behind. She never returned, and the Eevee began to starve to death without her. He was simply too young to find food all by himself, and everyday he would cry loudly, his sobs echoing through the forest. At first the other Pokemon would ignore it, but after a few days, some of the tertiary carnivores decided to end the crying of the abandoned Eevee once and for all. Luckily for the Eevee, at the exact moment when the predators attacked, they were consumed by flames. The Eevee's savior was a majestic, jet-black Ninetales, who had come into the forest and heard him crying. Seeing as the Eevee was completely alone, and the fact he had nearly been torn apart by predators, the Ninetales took the Eevee in as a foster son. The Ninetales, who's name was Gellert, decided to call the Eevee Derek, as a tribute to his former trainer.

Derek was taught everything he knew by Gellert, and the two traveled all over the region of Johto. Gellert knew all about the land from his days as a trained Pokemon, fighting Gym Leaders and exploring many different locations. The Ninetales taught Derek about the ways of humans, making sure the Eevee knew as much as he could. Gellert wanted to prepare Derek for the time when the Eevee became an adult, a job that had once belonged to Derek's parents. Only the Eevee was so much happier and carefree when living with the Ninetales, for he was the only dad he'd ever really known. They were hardly ever seperated; it was like they were truly father and son. However, by the time Derek was almost two years old, and not yet evolved, a group of humans became very interested in Gellert's different-colored pelt. They were fur traders, and began to hunt after the jet-black Ninetales. Seeing that Derek would be in danger around these fur-seeking humans, Gellert took him to Blackthorne City, where they hid for several months in the Dragon's Den. It was not the Ninetale's fault he had been born with black fur, but felt guilty about putting the younger Eevee in danger anyways, no matter what reassuring words Derek gave him. The Eevee was immensely concerned about his foster father much more than the Ninetales was worried for him, though. Since the fur traders could never find Gellert, they eventually gave up the search and went after other, oddly-colored Pokemon. That meant Gellert and Derek were free to come out of hiding.

Unfortunately, this was not going to be the joyful occasion Derek had expected, for around this time the epidemic had begun. Derek never knew that Gellert had contracted the disease, for it was unusually subtle in its early stages. But soon after Gellert became infected, he attempted to attack and kill Derek. The Eevee was terrified, the Ninetales had never done this, he was always so peaceful. Derek fled, but the attack left a mark on his mind. He hid in the city of Blackthorne, away from Gellert, who had left the city in search of better prey. But the Eevee noticed that other Pokemon began to act this way, savage, until all of the humans of Blackthorne were dead. Most of the Pokemon had gone savage, and Derek expected attacks to occur every minute....the only thing that kept him sane was a golden coin Gellert had given him. Maybe the Ninetales would recover, apologize deeply for his actions. Derek held on to that hope, but he never really believed it. Now he was nothing but some tiny little Eevee in a struggle for survival.

User Note:
-Emotionally unstable; his moods change quickly without warning; watch what you say around the Eevee, he might burst into tears or turn red from fury. Most of the time, Derek is a friendly, scared Eevee who only wants friends.

-Gellert taught him combat before he became infected, but his peaceful nature kept him from making Gellert a battle-machine.

-Derek planned to evolve, but then the two went into hiding and he never got a real chance to evolve.

Derek is ready to be approved!
Suicune

He is approved...but if you could change the word 'savage' into something else when you're referring to the infected.
It's nothing too big, I just don't want it to be misconstrued in the future and start needless fights.
Thanks
_________________

Okay, I will make sure to remember that. (:
Sponsored content