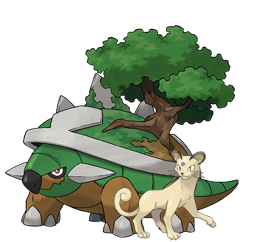 Chi was born to a wild grotle in Eterna Forest. For the first seven years of her life, she lived in the forest with the herd of torterra and their prior evolutions, migrating from freshwater lake to lake. One day, a group of trainers tracking the torterra herd captured Chi and several other turtwigs and stole several turtwig eggs.

Chi was given to a kind and rather enthusiastic trainer named Marlowe, who named her. Marlowe encouraged her pokemon heartily and gave them lots of attention. However, she got lost very often, and got stuck in the wilderness between towns multiple times. Thus, as Chi grew up, she had lots of experience outside civilization.

Marlowe lost battles often and was often broke. Nonetheless, Marlowe persistently kept training her pokemon, and evolved Chi into a grotle, then a Torterra. She received a grass plate a gift from a Professor, and gave it to Chi.

Marlowe took her team to Sinnoh, where she thought she might have more luck.

When the epidemic struck, Marlowe and her team were in town. The team was staying at a Pokemon Center to rest up while Marlowe ran errands around the town. Suddenly, mass chaos came over the town, and some unnamed soul let all the pokemon in the Center out. There were busses that humans swarmed to get into, then slammed their doors and roared off; there were families and their pokemon running left and right; and there were many, many captive pokemon rampant on the streets. In the hubbub, Chi quickly got separated from the team, and could not hope to find Marlowe. Soon, though, creepy, desecrated bodies began crawling over the streets, and attacking the living pokemon. In horror, Chi made her way to the woods as fast as she could (which is not very fast; she’s a giant turtle!) and settled to the ground. She blended right in to the forest.

Over the next several weeks, Chi traveled down through the forests of Johto, relying on her camouflaged back and on her ability to photosynthesize to eat. She avoided encounters with undead and only battled the detestable things when an attack was imminent. It was very saddening to see pokemon around her change; she accumulated a lot of sorrow -- but she still kept moving. She was most worried about the smaller pokemon that could attack her legs and slip under her without her being able to defend herself, or sneak up from behind her, where she would never be able to see them coming.

In a regular day of her travels, Chi awoke. She stood up to continue moving on, when, with a startled hiss, something hurled itself off her back. Alarmed, she lurched around to turn and face her attacker, and saw a fluffed-up Persian staring back at her, equally alarmed. It didn’t smell like the infected ones; instead, it rather smelled like it had been in the forest for a while, like her.

“Are you alive, little one?” she asked it.

“Of course,” she said. “And feel free to take the berries on my back; I was not aware that they were even there. Beware, I move slowly. My name is Chi.”


User Note
-I modeled this pokemon after my starter in Pokemon Diamond.
-**Though Bulbapedia doesn’t list this move for torterra, I had a torterra in my Diamond game that learned this move leveling up. Any ideas why it’s not on Bulb?

Height-3'10”
Weight-81 lbs
Pokédex Entry-Behind its lithe, elegant appearance lies a barbaric side. It will tear apart its prey on a mere whim. [Crystal]
Item-Scope Lens

Hinge hatched at a pokemon Hatchery outside of Cherrygrove. He doesn't remember, nor does he care, where his name came from. Since it was a hatchery, Hinge did not receive any large, special amount of attention and was left largely to his own devices, aside from occasional training. He learned amongst other, trickier meowth and persians to keep to himself and not to confide in others.

After roughly a year, Hinge was adopted by a trainer, who was interested in having a very strong team to challenge gyms with. He trained his pokemon well, equipping Hinge with a scope lens, and got into battles very often. He trusted his pokemon and was warm to them, but he was rather impersonal and Hinge did not feel particularly close to him. In this stage, Hinge began to learn to calculate his opponents actions, and his trainer encouraged his temper and taught him techniques to funnel his emotions and aggression into his battles, leading to strong, charging, blitz techniques. Hinge got a lot of experience, and after touring several gyms in Johto, he evolved into a persian. They continued their tour in Johto.

Several days before the Epidemic hit, Hinge's trainer received warning of the epidemic, and he released his pokemon into the wild.

Hinge was confident in the wild. Why shouldn’t he be? He could hunt perfectly well. He knew how to find berries, though he rarely ate them. One day, though, he took down his prey, a slow bidoof, and saw the festering wound on its stomach. Knowing that it was unsafe to eat, he took down another. Also infected. Then a starly. Then a hoohoot. They were all infected. With growing dread, he realized that the prey in the area was not going to be safe to eat. He snarled with anger and disemboweled the rotting corpse that so deceptively moved around like food. In wake of his discovery, Hinge began gorging himself on berries whenever he could, constantly moving around to find new bushes. He was hungry and desperate, and his fur grew more matted. He worried very much about the winter, when berries would not be abundant; he knew he was going to starve.

He spotted a berry plant growing next to a scraggly tree and hurried over to his next meal. He crouched on the boulders near it and began stripping the berries form the plant’s little branches, when the ground suddenly lurched upward! He hissed and flung himself off to one side, where he watched, astonished, as a giant pokemon emerged from the forest floor. No, not emerged--it had been there all along, just camouflaged seamlessly into the environment.

It shuffled around so that it could see him. It was a torterra, he could see it now; and it was obviously not the weird gray-whither-dead colors of the infected ones. It’s beady eyes looked pretty healthy. In a great, low, moaning voice, it said, “Are you alive, little one?” It was female.

Hinge dipped his head. He was about to leave, and leave the great behemoth in peace, but he realized that eating berries off its back was probably terribly rude. He cleared his throat. “I’m sorry for eating some of the berries growing on your shell, I didn’t mean . . . I, er. . . .” Hinge trailed off as he focused on the plant. Berries. Growing. On her shell. Growing. I can bury berries on her shell, and grow them! And torterra are final evolutions: very strong, I can travel with her. He pictured the torterra with a great thicket of ripe berry bushes on its back and his stomach almost growled. “May I travel with you?”

“Of course,” she rumbled. “And feel free to take the berries on my back; I was not aware that they were even there. Beware, I move slowly. My name is Chi.”


Thus began Chi and Hinge's comradeship. Chi continued her movement, slow as it was. She and Hinge did not talk very much, but Hinge slept near her or on her very shell, and while Chi walked, he would range far and wide in search of berry bushes. He took about half of what he found back to Chi, where he would simply jump on her back, dig a shallow hole in the soil on her shell, and bury them. He remembered his trainer watering the plants, so Hinge strayed into a town, where he took a watering can from a garden and placed it on Chi’s back, where he could use it to fetch water if the soil on her back seemed too dry. Chi noticed his comings and goings with a bit of amusement, and did not mind it at all.

Their relationship was not one-sided, either. Hinge sometimes fought off infected, preventing any infected from coming near his berry patch. Chi helped him with her distance attacks, and together, they made a sort of team; not sentimental, not close, but together, they survived. They continued to meander through the forests when they heard a howl from the nearby Canalave City. . . .

Pictures are from bulbapedia.

Um, Hidden, Ilex is closed. Sense Sil has a save on it.
Guest

Moves shown are the 5th gen moveset. You might need to go to an earlier gen [click other gens at the top of the box] to see if it's a legit Torterra move.
Guest

Whoops, thanks Moonlight! and Neoven8tr!
The author of this message was banned from the forum - See the message
renegade

Err- SkyRocket has a save for the last spot in Rage, too :u
Guest

Thank for telling me about all these saves guys. I was looking at the Character sheets, but it turns out I really should've looked at the res thread (derp.). Again, thanks all!
The author of this message was banned from the forum - See the message
renegade

No problem~ It can get confusing sometimes (:
The author of this message was banned from the forum - See the message
renegade

I made a team just today in Canalave Shinnoh, if you want to join c:
Guest

EEEE Thanks Clana!
The author of this message was banned from the forum - See the message
renegade

Sure thing :3 I look forward to having you on the team~
Suicune