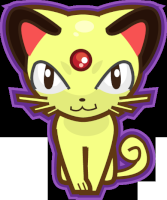 History- Raised from an egg by an older trainer, she trained Bernie and together they were a force of nature. With the rest of her team his trainer quickly powered through the gym's. She leveled Bernie up, teaching him moves of four different types, even giving him a tm when she wanted him to have a fouth.
Eventually she tired, returning to her home town and settling in with a nice guy and having two children. All of her other pokemon were given to her children as they reached the trainer age. Bernie stayed with her though, he couldn't leave her. When the man she married died he was there for her (he never liked him anyway). Bernie stuck by her, keeping her warm and aging along side her.
As they aged he began helping her whenever he could, being an extra support, laying in the sun while she napped, helping her tend to her garden. When wild pokemon would wander into their yard Bernie would chase them out, until his old bones made him slower and more worn out. Eventually he accepted his age and accepted the grumpy old man persona.
When the outbreak happened Bernie was lounging in the sun, waiting for his trainer to wake up. She slowly made her way down the stairs from her bedroom, relying too heavily on the railing. When it broke Bernie was up before she even hit the floor. His bones cracked as he darted up the first flight of stairs where she lay on the landing. She was bleeding, bent at an awkward angle but she was breathing. Just barely breathing.
He was out the door as quickly as his tired limbs would let him, bones aching and heart beating furiously in his chest. He went for help but he wasn't sure where to go, he hadn't been outside his property in so long. That's when he ran into the first of the infected, a rattata bleeding from a gaping hole in it's flank with dead eyes and mouth dripping blood. It ran to attack Bernie without a moments hesitation. Without thinking he used Thunder on the thing, pushing it away and dazing it. The move felt almost foreign to Bernie, it had been so long since he had battled. A strange glee bubbled inside him before he remembered his trainer.
He raced back and to his horror saw a pidgey (just like the ones he used to chase out of the gardens) feasting on his trainer. Pecking and ripping pieces of flesh from her mercifully dead body. He stood stock still, hoping it was all an elaborate dream. Bernie fled, hooking himself on a large nail on the wall in his escape. He ran, away from his home, his dead trainer, and the small town he grew old in. Ran until his old bones gave out on him and his paws were cut up and bleeding.

Appearance- Looks like a normal Persian, but wears a red bow tie and has cut up paws and a small cut on his shoulder. Fur has started greying from old age.
Personality- The definition of a grumpy old man, short tempered and irritated by little things. Tends to complain about how old he is. Thinks highly of himself and definitely doesn't have a lack of self esteem. Tends to brag a lot between grumpy comments. Gets angry when asked about trainer. Acts big and tough but is secretly afraid and upset over what has happened. He keeps quiet but makes a lot of sarcastic and biting comments. Low key incredibly loyal.
User Notes- -Loyal but needs to be convinced -Rarely talks about himself -Probably asexual/aromantic if anything. Art by me

I have fixed his image for you.

Psst, you will need to specify where you got the image for him! Even if you did the art yourself, just add it in the user notes so we know. c:
Victini

Not bad for a first profile - well done.

I would like to know a little bit more about Bernie's personality though. A single, decently-sized paragraph is what I'd like to see, at least.

In the 'species' section, it needs to be dex no/name/classification, so in this case it would be #053, Persian, the Classy Cat Pokemon.

Is the personality summary long enough? I can add more if you think i need to? Any other tips? Is there anything else i should be doing?
Victini

Looks all right to me - like I said before, for a first profile it's very good. Well done.