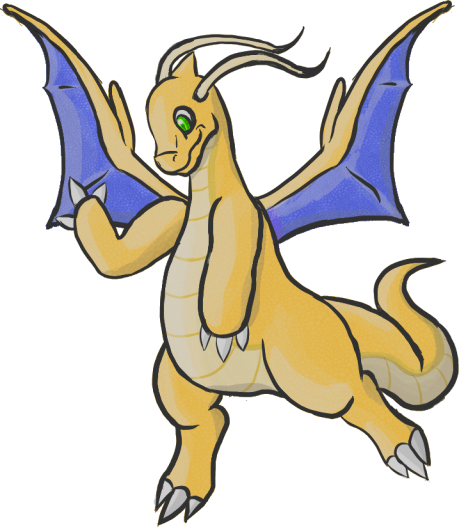 Will be a reworked character I had on another roleplay site, aside from a few physical traits she will be entirely new however.

Personality: A goof ball at heart, this Dragonite has many quirks and eccentricities to her making her seem bizarre when first meeting her.
[*]Fun loving and practically always smiling, this Dragonite is easily amused and loves making jokes and may play a few harmless pranks on the more grim members of her company. She also loves to fight, and has no problem rushing into battle, making a few whoops and other sounds of excitement when in a 'good' fight.
[*]Tends to overreact to non-important things for comedic effect, typically with bizarre faces and vocalizations. Her phrasing of words is also quite bizarre.
[*]Has as a moral code so strict as to seem ridiculous, and can go to far.
[*]Alana is an EXTREMELY determined Pokemon to the point of putting her sanity into question. She almost obsessively holds fast to her ideals of protecting those weaker than you, and helping others when they need it. She will not stand for any injustice.
[*]She is fine with trying diplomacy if the situation is ideal for it, but prefers to muscle through sticky situations. Alana is a very blunt, but normally very calm and rational when it comes to serious issues. Her instincts for self-preservation are easy to trigger though, so any kind of animal fun would end up with a punch to the face.
[*]Is a reliable and loyal friend but, if you happen to betray her trust, Oh, you. Are. Screwed. Very vengeful and violent, this female never lets go of a grudge or prejudice, an issue that has only been intensified by the stress of recent events.

User Notes-Inspired by the great Space Marine Protagonists of the Metroid and Doom franchises, as well as my daydreams about being a mutant lizard woman who fights crime.
-Obsessed with Batman and looks up to him like an idol