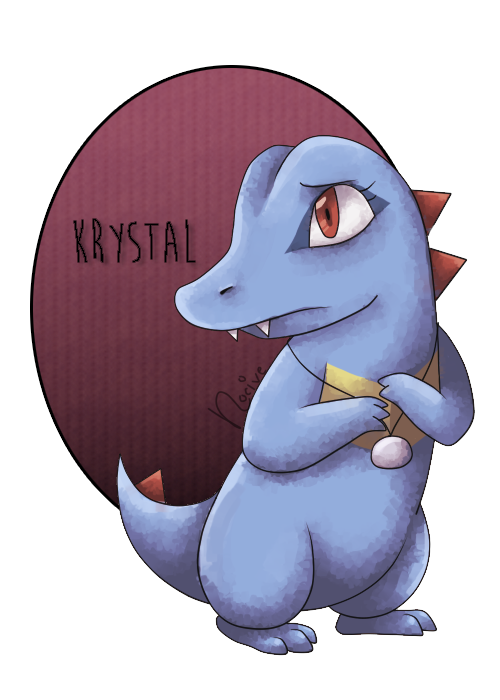 History-   Before the infection came about, Krystal was a Pokemon trained by the self-proclaimed Pokemon Master, eleven year old Ryan Greene. Together, he and his starter worked their ways up through the gym circuit, making it all the way to the third gym. Krystal's teammates consisted of Otto, Ryan's friendly, outgoing pidgeotto; Lelo, a shy spearow and Otto’s mate; Bob, a wurmple that Ryan's elder brother had given to him from Hoenn (it had been an insulting gesture, but Ryan enjoyed Bob’s company nonetheless); and Gale, a golbat they’d found in Union cave.

Krystal was always Ryan’s favorite, despite his attempts to make his Pokemon think otherwise. Whenever he trained everybody, Ryan would always pay close attention towards Krystal, encouraging her more than anybody else. When she’d expressed her fear of evolution, Ryan even managed to get her an Everstone, telling her that only she would be able to decide on her future.

That wasn't to say that anybody resented her for it. The whole team was a closely-knit group of friends, sometimes closer than a real family was. Life couldn't be better for anyone.

And then the apocalypse happened.

They'd been camping at the time, trying to find a new teammate in the Ilex Forest. None of them had known much about the infection - they barely even knew about its existence, let alone its severity. Ryan, being the rash type, paid no heed to the many pleas from his mother to come home, and continued on his search for a sixth member.

Lelo the spearow got infected first. Nobody knew how, but the once-quiet creature had gone crazy, attacking her fellow teammates - even her pidgeotto mate, Otto - with more ferocity than anybody had ever seen. It was so bad that Bob the wurmple had to restrain her with string shot. One week later, still fighting the restraints that her friends had made, she breathed her last.

It was the infection, of course. Ryan still did not grasp the complete severity of it (he was at least fortunate in the sense that the infection had somehow strayed from his view), but at least realized that it was fatal. Not wishing such a fate on his remaining team members, he began packing up the camp, giving everybody one night to mourn their comrade.

It was that night that everything went to hell.

Otto was the first to die (Lelo nonwithstanding, of course). Killed by his own mate, the pidgeotto spent his last moments staring at his dead mate rip through his stomach with red, savage eyes.
Other Pokemon had arrived as well, and in similarly distorted states. Some previously trained, others completely wild, all searching for food. All finding a human and his Pokemon out of their Pokeballs, a feast just waiting to be eaten.

The surviving three Pokemon managed to hold off the invading forces for quite a while, all things considered; Gale the Golbat kept the invaders at bay with his gusts of wind, Bob trapped individuals with his string shots, and Krystal froze anything that came too close. Nonetheless, they were overwhelmed in the hour. Gale was eaten alive by an arcanine, and Ryan had found himself without a throat courtesy of a savage bellsprout. The Totodile did not know what happened to Bob, though he was presumably killed with Ryan.

It has been just past two years since that day. Krystal has been avoiding any Pokemon that she’s seen, not even Poison types (though to be fair, she does not know that poison types are immune). She has taken to constantly moving, rarely staying in one place for more than a week, and despite her predatory nature, she sticks to berries and apples for consumption. On the few occasions that she’s spoken to other Pokemon without running away in fear, she stays quiet, rarely letting her guard down.

Now, she's reached Olivine city. She knows little of what the future holds, and soon, she may be forced to join other survivors in order to stay in the ranks of the living.

Appearance-   She’s slightly taller than average, but is otherwise an average Totodile. No notable scars exist on her body, and she has no permanent markings either. The only thing that makes her distinct from other Totodile is a string necklace with an everstone attached to the end.

Personality-   Krystal was a very jolly little critter, always excited for the new day, and ready for what came next. Like her trainer, she enjoyed Pokemon battles immensely, and was just as happy as her trainer was whenever they earned gym badges.

The key word there, of course, is ‘was’.

Now, she is quiet. She rarely speaks to other Pokemon unless it’s absolutely necessary, and even then she speaks quietly and in short sentences. She tends to take a defensive stance in battles, being too afraid of the infected to attack them head-on.

This does not, of course, mean that she's heartless. She'd help somebody in a tight position if necessary, but that doesn't mean that she'd dare speak to anybody she'd help, or even make her presence known in her aid.

Something else of note is her fear of evolution; she's always been afraid of the change in personality it brings. What's more, this fear has been aggravated by the infection, which she fears to be Pokemon's next evolutionary stage.

Please move this to the Profile Computer and accept me.
Thank you.
Mew

Just a quick double-check, did you draw the profile image?
Guest

Nope. Got it commissioned from a friend who's known as "Nocive". She doesn't have a deviantart or anything, and her pen name's already on the art. She'll probably join the site soon, though.
Guest

Could you not accept my character/put this character in the WIP section until I post again saying that I'm back? I'm going to go on holiday soon, and I'd rather not come back to find that Krystal has been harbinged before my first post.
Guest

Alright, I'm back from my vacation. Could you guys move this back and review it?
Mewtwo

I'd like to activate this for the Colosseum, please?
Mewtwo

Krystal has been placed in Chapter 1: Scavengers. She will be third in the posting order.
Sponsored content