Absinthe the Absol and Kaitlyn the Manectric [Under, Orre] [WIP]

Absinthe the Absol and Kaitlyn the Manectric [Under, Orre] [WIP] 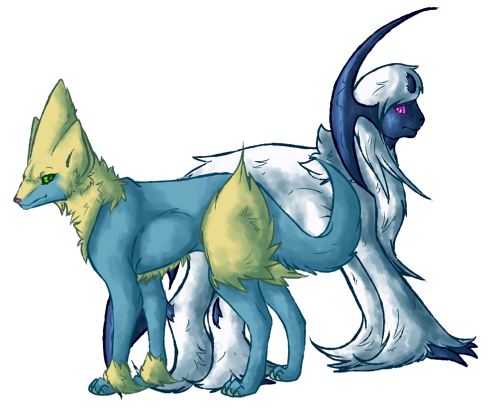 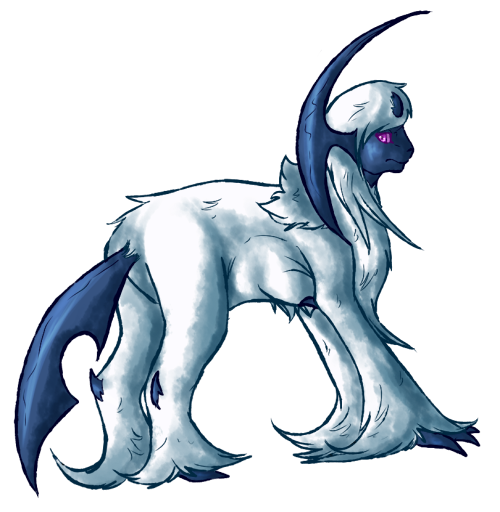 Kione as a pup was born to an Absol and Nidoking, owned by a man who was a local Psychiatrist of Goldenrod City. He was intelligent, fast, and strong, ideal for a newborn. The doctor had grown fond of the little child, full of energy and curiosity, he often allowed the kid into his sessions with his patients, letting little Kione sit on a chair and listen as the two humans talked. Everyone who had come in to meet the doctor had always been depressed, angry, or any other negative emotion, and as time grew those exact emotions began rubbing off on the little Absol.

Once Kione had been taught to read and write [The Psychiatrist prided in having intelligent, human-like Pokemon.], he had begun to understand what the patients were saying. Things about how nothing matters in the world anymore, how everyone should die, or how nobody understands them. Hearing the same words day by day, it began to affect him, making him believe that those thoughts were true, that nobody really cared in the world, that there was no meaning in living.

Eventually he couldn't take it anymore, he had fled from his home and into the streets, he didn't want to hear those words anymore, he didn't want to listen to them. Kione continued to flee, and once he reached Olivine had had stumbled upon a boat which he immediately boarded. He could still hear their voices screaming in his minds, convincing him that nothing mattered anymore, that there was no use being alive. The ship he had boarded was heading straight to Castelia, Unova, and once the mobile docked he had begun to lurk the alleyways of the city, keeping away from the humans.

One day he had stumbled upon a Houndoom in the alleyways, introducing itself as Richard the two had begun a mutual friendship, often just sitting down and talking to each other. The fire hound had sometimes mentioned a human taking care of him, and eventually Kione agreed to meet this human, who turned out to be a bertender of the Castelia Cafe. On their first visit the Absol had knocked over a bottle of alcohol, having it pour all over his fur and face. This drink turned out to be Absinthe, and after some laughter and jokes Richard had concluded that 'Absinthe' would be an interesting name for an Absol, and thus Kione had begun to go by Absinthe.

Life wasn't complicated or hard for the Absinthe, in fact, he loved the street life. Becoming part of a gang and serving his leader, it had blocked away the voices telling him that nothing mattered, and it gave a sense of meaning to his life. One day Richard also introduced him to a rather sickly looking Espeon called Anastasiya, and they too, became friends. However, one day all the humans began evacuating the city, abandoning their Pokemon and running away in fear. Absinthe didn't understand what was going on, they were all screaming and panicking, and his horn began to tingle, he sensed disaster.

Absinthe rushed up to the roof a building, looking out on the horizon with Richard and found several mobs of Pokemon coming to Castelia. He was confused. They were just Pokemon, why couldn't the humans just fight them off? However after a closer inspection he noticed their odd movements, bloodied forms, and they all reeked of a single smell. Death. Feeling fear rise up in him he, Richard, and Anastasiya all began to flee the city, running towards the desert. Right before they could reach the gates to the next city a wave of power hit them, and Absinthe could only watch as Richard and Anastasiya vanished in thin air, while he blacked out.

When Absinthe awoke he found himself in the middle of Pyrite Town, surrounded by dead bodies and blood. What had happened? He had no idea, but immediately rushed to the nearest building for safety. There was an elavator there, leading down, and hoping it lead to a safer area he cut through the metal, falling through the gap and landing in Under. Here he had witnessed other dead bodies, and kept to the shadows, determined to stay alive.

Piercing violet eyes glare at you through the darkness. Long, elegant white fur standing out in the shadows like light in the darkness. His blade shines from the dim light, and before you can speak he vanishes, deeper into the murky depths, no where to be seen again.

Absinthe's fur is much longer than normal Absols, and kept pristine with several cleanings a day. He has purple eyes that tend to look angry, making strangers wary of him. He stands tall, however slightly hunched over. Claws are unusually long and thick, and his tail is oddly shaped. He almost never has grime on his body, disliking the feeling of it, and usually cleans himself to the points where his blade and claws shine.

Absinthe tends to be overly serious sometimes, and has a very dark sense of humor. The Absol is wary and cautious of everyone, and doesn't give out his trust easily. Tends to come off as vain, as he hates getting grime and dirt on his fur. [Complains about it feeling disgusting as well.]

Although dark and sometimes intimidating Absinthe is a very intelligent individual, and will definitely back down from a fight if he knows he cannot win. He tries his best to put his knowledge to good use and sometimes utilizes his ability to read.

He also gets bored with things very easily, and requires constant things to keep him from becoming frustrated. Absinthe often hears voices in his head, repeating words that he had heard back in the Psychiatrist's office. 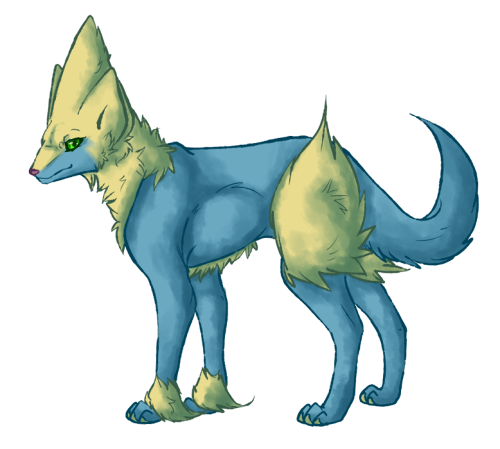 Your average run-of-the-mill Manectric, however Kaitlyn she is shorter than the average of her species. She also has lively green eyes.

Hyper, fun-loving, and all-around friendly, Kaitlyn is a very optimistic individual with concrete morals and ideals. She loves making new friends, and actively tries to strike up interesting conversations. She holds a strong passion for the arts, enjoying humming catchy tunes and scratching makeshift doodles into the earth. Although she loves dancing and the concept of it, being a quadruped she finds it hard to move as smoothly as a bipedal, and thus has given up on trying to learn the foxtrot, her favorite dance. However, if she ever meets a two-legged Pokemon (or one that has the ability to walk on two legs) she will request for them to dance, and if they respond saying they don't know how to, will eagerly recite the methods of doing specific steps.
Anyone who has an interesting accent, shiny coloration, pretty eyes--really just anything that makes them stand out from the rest--is almost always garunteed to receive special treatment from Kaitlyn, regardless of their personalities. This Manectric easily falls in love with anything beautiful, and will easily begin to gush and obsess over anyone who has a pretty pelt. (Especially those who was gorgeous coloration or nice color schemes!) She often times find herself oblivious to the opinions around her--which is absolutely fine, she believes the only opinion of her that matters is her's and her's alone.
Although a very happy Manectric, contrary to popular belief, Kaitlyn does have the ability to be serious when needed, and does tend to get annoyed when others don't listen to her words. She is very easy-going, but her anger can erupt quickly if one pulls at the right strings.
She enjoys teasing her long-time friend and ex-mate, Absinthe, and has great fun embarrassing him in front of others. Whether she has good intentions or is doing this out of spite is often unclear, and whether of not she holds hatred for the Absol is unknown.

» Absinthe the Absol [Under, Orre]
» Wolfe the Manectric [WIP]
» Carrie the Froslass and Elliott the Absol (Orre, Relic)
» Asche the Absol and Virgil the Liepard [Pyrite, Orre]
» Cosmic the starry Umbreon and Glass the Absol (Under, Orre)
Current date/time is Wed Nov 30, 2022 10:01 am