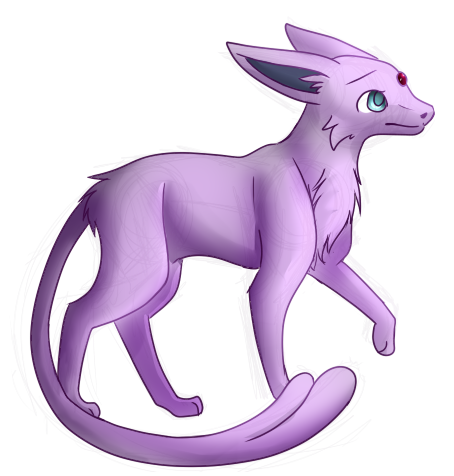 Watch the end through dying eyes

Now the dark is taking over

Show me where forever dies

Take the fall and run to heaven

All is lost again, but I'm not giving in

"Espeon is extremely loyal to any trainer it considers to be worthy. It is said that this Pokémon developed its precognitive powers to protect its trainer from harm."(Ruby/Sapphire Pokédex)

"It uses the fine hair that covers its body to sense air currents and predict its enemy's actions." (Heartgold Pokédex)

No items are in her possession

Adalia was born in a litter of four in a small farm known as MooMoo. Life was quiet in that farm, but to the small Eevee, it was her little hell. She was the only one that couldn't see, and she was the only one that was the oddball. Her siblings hadn't noticed, up until they played a little game. It was a simple game of hide-and-go-seek, Adalia was 'it'. To her siblings, it was strange how despite their constant giggles and whispering, that even when her eyes meet theirs, they would just simply move away to another spot. The game ended upon supper time, the siblings discussing among another why Adalia didn't yell out; "See you!" upon finding them. One certain Eevee giving it a go, timidly went over to the young blind Eevee and asked why she didn't call out the findings. Adalia replied with the most loving of smiles;

"I couldn't see you because I only see nothing."

Immediately did this trigger something within her siblings. Adalia was different from them, she wasn't one of their group, and she couldn't see anything. She couldn't see them, and she couldn't see herself. She doesn't know where she is does she? She doesn't know where everyone else is either. Her siblings slowly mocked her day-by-day, taunting her upon the fact that she could not see. She was a freak, because she could not see them or herself. What was the Eevee's reaction upon the bullying you may ask? She would yell at them to go away and tell them to stop, she wanted it all to stop. Adalia lost her calm composure several times during the taunting, the anger that rose inside her reaching a fever pitch.

Except this one evening, it became much more than losing her pride and dignity. She had begun to lose the only part of her they could never ruin, herself. With that thought in mind she ran away from home, not knowing where she was going, but she couldn’t see her surroundings anyway. The only things she knew as the night grew darker were the sounds of distant creatures and the soft feeling of the grass against her paw pads. Sometime within the night she collapsed from utter exhaustion upon the side of a busy road and her last thoughts were that she wouldn’t be alive for long.

However the very next morning an elderly couple found her small body and took her to the only place they knew she would be safe, their home. From there she began a completely new life, her former thoughts of the world changing and brightening. The couple knew she was blind upon her eyes opening, but Adalia didn't mind one bit for some reason and she didn't get mocked by the other Pokemon that lived in there either, in fact, they loved her. Apparently some lost their senses too, the deaf, the mute, etc. All at once she felt as if she was finally in a place she belonged, she was finally home.

It had been a couple of months since Adalia began living in their quiet home and since then she had evolved from the love and warmth she had received from the family, becoming a magnificent Espeon. Her hope was that when she evolved her blindness would be solved but this was not the case in Adalia. Sorrow hit her hard when her evolutionary light faded but she was happy in the end when her family still accepted her and loved her.

The Epidemic swooped down upon Johto quickly, the disease hitting Adalia's family before she could do anything about it. Shock hit her like a frozen wall in her heart and what she feared more than ever was her family rising again and killing her, the blind Espeon who would never see them coming. So with that in mind, she ran and ran, not a destination in mind but rather a goal of finding others to survive with and find them she did. Along the way she ended up meeting many survivors but there was never anything she could do to aid in the fighting when Undead attacked therefore many of the creatures she met despised her until their last breath.

Still she ran, her body carrying her towards many new Pokemon and even some she grew to call friends but deep within her she carried a depression that festered like a newly infected wound, warping her already screwed up mind into something else. Not something evil or cynical but rather something that broke her to the core. She became a creature whose only goal in life was to one day die, her depression taking her over and manipulating her thoughts and the way she carried herself. Once a prideful Espeon, she lost all want to take care of even the smallest aspects of herself. With this growing inside of her she left her friends one night and roamed alone for a few months, harnessing her senses while she secretly wished an Undead to catch her unawares and slaughter her mercilessly.

After these months of becoming a wanderer, Adalia’s other five sense had grown immensely. So much so that she no longer worried about getting herself killed but rather worried about other things such as fixing her broken mind. That thought became her top priority and soon she rose out of her depression like a majestic whale coming up for air. No longer afraid of others seeing her for what she was, Adalia grew confident in her blindness, her sense of hearing increasing tenfold and her sense of smell becoming like that of a hound dog. Pride once more in her step, she made her way towards a new life for herself with a new attitude to go along with it. She truly believed that now she was ready to join another group of Pokemon once again and this time, she would not leave them for anything.

Glassy light blue eyes stare into the distance as the trees rustled softly against the wind. Ears and tail are perked up in alert, yet, despite losing one of the five senses, she still stood proudly.

Adalia appears as a normal Espeon, but is rather underweight due to the lack of food before and during the Epidemic. She is rather petite, and her fur is much more softer and cleaner. Adalia does seem to care for her fur despite being blind, she must be overgrooming herself.

Once, Adalia would have been considered a prideful creature who wanted nothing to be normal and looked at like any other Pokemon but now that is not the case in the least. No longer scared of what others will think of her blindness, she embraces the fact but doesn’t point it out. If someone notices it then so be it but otherwise she acts completely normal despite her initial unease around new Pokemon.

> Adopted from Qwrk; Original Profile
> I've revamped her a bit, fixing up some of her old history and adding onto it to better shape her personality.
> Her level up is from her months alone.
> I've kept her shyness but I wanted her to develop into more of a character that is confident in herself despite the fact that she sometimes grows impatient with those around her and becomes quiet.
> Adalia depends on her other senses to outline what’s around her.
> TMs were taught during her days with the old couple as they wanted her to learn to defend for herself once their time was up.
> Adalia's Text; #BB69DB ~ #54C9DE

All done and ready for approval<3
Mewtwo

When altering an adopt you need to put into user notes what you changed and why. I see clear differences in level and history with no reason behind it.
You are also not allowed to change their age, nature or characteristic in a adopt even if you revamp them. Those stay the same. But I see you changed the age and characteristic. You may as well have made a new Pokemon.

Alright I apologize, I did not know that. I hope I fixed the problems.
Mewtwo