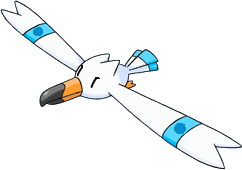 History-Lex's father was a Pidgeot that belonged to a trainer. He and his said trainer were visiting Lex's mother, Ariel's area because they were training. The Pidgeot easily charmed the lonely Pelipper and the following evening Lex was conceived. The Pidgeot left not a day after, breaking her mother's heart. By the time she hatched she vowed never to love anything again, and as she grew up regarded her with indifference. She only gave her the bare necessities for survival and hardly ever spoke to her. She tried to make friends with the local pokemon her own age, but they mocked her, for not having her parents love her and her unusual plumage. She distrusted Adults so she was drawn to the younger pokemon, because of their innocence and simple acceptance. The her Pokemon peers made fun of her further for that, and they attacked her whenever they came around. Since her mother did nothing to stop it, she flew as far as her bruised wings could carry her.

One day after an especially brutal encounter with her tormentors she happened across a path that humans normally took, Something caught her eye. It was a bottle with what looked like water, remembering seeing trainers (Her mother told her to always avoid them so she sought them out) Open them to drink she held it with her claws and did the turning motion. She held it up to her bill and took a drink, and found it to be sweeter than anything she had ever had before. Far sweeter than Life she thought, and it made her happy.
It also healed all her wounds, which made her believe it was magical. With her new-found energy and confidence the next time the bullies met her, she beat the living crap out of them. It happened so many times that they ran at the sight of her. She never did find any again, no matter how hard she looked.
She left the colony when the Epidemic hit, and now she travels around to survive and find more soda.

Appearance-Her blue plumage is more brilliant than that of normal Wingull, and has a Pair of dark Blue dots on her wings. But aside from that she is normal.
Personality-Rash, not to think things through and very independent. Sassy, Quick to judge and acts like a tomboy, but loyal to the end.
User Notes-
-Extremely distrustful of Adults, and dislikes pokemon her own age, she prefers those younger than her, and fosters a protective big-sister mentality towards them.
-Likes Soda and can be used to bribe her to do something.

Your history is too short, and needs to be at least two paragraphs to be passable. Try adding a little more detail such as how she first encountered the Epidemic, maybe where her odd love of Soda came from. Things like that can easily add another paragraph.
_________________

I await your approval Mewtwo.
Zapdos

Do NOT push to have your character approved. It is rude and disrespectful, not to mention arrogant, to think you have the right to try and get Mewtwo to approve you sooner than everyone else. This is a huge violation and not taken lightly. All of us Administraters have lives outside of EJ that we balence with the site.
Be patient. Next time there will be severe consequences. Mewtwo always gets to the profiles within a week. You will live waiting that long.
Moon Moon

I didn't mean to be disrespectful! Sorry!
Mewtwo